Kate Forsyth is a novelist and poet best known for her award-winning Young Adult Fantasy series.April sees the launch of her book for adults, Bitter Greens, here reviewed by author Margo Lanagan.

The year before last, I wrote a Rapunzel story. It began with the prince arriving at Rapunzel’s tower to find her severed plait of golden hair tumbled in a pile on the grass. As he mourned over it, the witch rode up. She captured him, took him to her castle and imprisoned him in a dungeon. There, the single strand of hair that he had souvenired sprang to life, insinuated itself into the padlock and released him, and led him through the castle to rescue Rapunzel from her prison room.
KateForsyth has found a stash somewhere of just such live, enterprising threads. Her new book for adult readers, Bitter Greens, is a turf-to-tower-window braid of live, red-gold hair. It’s a big, glorious read, full of love, lust, pain, politics, blood red and blue, and some of the best frocks and the worst fleas ever.

Forsyth binds three main strands into this glowing cable.
First, via the life of Charlotte-Rose de Caumont de la Force, who published ‘Persinette’ in her Les Contes des Contes in 1698, she leads us into the staggeringly ornate, crowded, venal, powdered-and-patched court of Louis XIV. Through Charlotte’s eyes we witness the scandal, the witch-hunting (literal and figurative), the favour-mongering and the grinding of the intricate machine of court etiquette—all revolving around the spoilt, unsmiling King whose attention, like a toddler’s, must be caught in just the right way if the sun is to shine in Versailles. All this determinedly superficial making and breaking of livelihoods and reputations finally gives way in the dead-serious matter of the persecution of the Huguenots, which forces the Protestant Charlotte-Rose to choose between exile and banishment to a convent.
The second strand of the story is the Rapunzel tale itself. Forsyth takes this up just as Charlotte-Rose did at the Abbey of Gercy-en-Brie, amplifies and vivifies it, anchors it firmly in late-Renaissance Italy and winds it through the Charlotte-Rose story. “No one can tell a story without transforming it in some way,” says Charlotte towards the end of the book, and this is a fairytale retelling that grows layer on layer, allowing us to glimpse a whole society from Medici to mendicant even as we revel in the magic at work upon, and within, the poor imprisoned mask-maker’s daughter Margherita.
*** 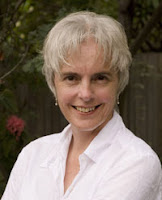 Margo Lanagan is an internationally acclaimed writer of novels and short stories (her list of prizes can be found here). She lives in Sydney. Her most release is Sea Hearts. She maintains a blog and can be found on Twitter as @margolanagan.