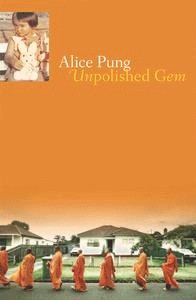 As part of our focus on Australian women writers of diverse heritage this month, we have some fabulous guest authors writing posts for us.  Last week, Tseen Khoo wrote on narrow interpretations of writing by Asian-Australian women writers, and this week, Alice Pung muses on Ruth Park, class, and marginalisation. Alice is the acclaimed author of two award-winning books, Unpolished Gem (2006) and Her Father’s Daughter (2011), and editor of Growing up Asian in Australia (2008).  Her works describe her childhood as the daughter of migrants in suburban Braybrook, Melbourne.  They also delves into the stories of her own family, as well as those of other Asian-Australians.  Clear, evocative and precise, Alice’s writing is accessible and a pleasure to read. As a child of parents of diverse background, Alice is also sensitive to the effects of marginalisation not just through race, but also through class.  In her piece below on Ruth Park, she discusses the importance of literature in helping us to see, understand and respect the lives of those who have been sidelined in Australian culture.  Alice has also written an introduction to Ruth Park’s Swords and Crowns and Rings, placing the novel in an historical and social context, and explaining how these contexts influenced Park’s writing.  Text Publishing has kindly donated a copy of Park’s novel for a giveaway for our focus this month, as has Black Inc, who have donated Alice’s first book, Unpolished Gem.  All those who read and review a work by an Australian woman writer of diverse heritage this month will go in a draw for these books.  We look forward to reading your your reviews!

Ruth Park and her Characterisation of Class Ruth Rosina Park was born in 1917 in New Zealand, and lived through the Great Depression. She came to Australia after marrying the writer D’arcy Niland, and worked as a shearer’s cook, fruit picker, opal miner, secretary and housekeeper before raising a young family in the slums of Surrey Hills. Described as ‘an antique island where the nineteenth century still prevailed’, Surrey Hills was a feral, dirty and depressing place to live in the early twentieth century, but it is also where she set her award-winning first book, The Harp in the South, based on Park’s observations while living above a shop in Devonshire Street. While struggling to live as freelance writers, Park and her husband would write 60, 000 words a week, selling only about 15, 000, and scrapping the rest or recycling it into other material. Their fortunes changed when Harp in the South won the inaugural Sydney Morning Herald novel competition in 1946. Like Dickens’ works, it was serialized in the paper and caused a furore. People were also scandalized that a young, beautiful woman wrote this book: it has child abuse, prostitution, abortion, gruesome accidents, alcoholism, and street violence. Many critics, mostly men, said it had no literary merit –presumably those same critics would praise writers like Steinbeck for their gritty realism. In fact, the runner up of the competition, John Cleary, who also wrote about the Sydney slums, didn’t attract any censure. A priest denounced Park’s book from the pulpit while another one praised it as an influential moral work in its portrayal of compassion.

When I read the work of John Steinbeck, Carson McCullers, and Ruth Park, I am reminded of how important the role of literature is to helping us understand the marginalized. It is often tacitly assumed that the middle upper classes make art, while the lower classes make crafts and decorations; just like it’s assumed that Western culture creates great music and literature; while Oriental and African cultures create folk art, fables, and gangsta rap. So deeply entrenched is this idea that the poor are not creators of culture that we are deeply suspicious of any author who goes on at length about their working class roots, trying to work out whether they are disingenuous or for real. After all, the ‘hot and struggling masses’, as Fitzgerald called them, aren’t going to have the energy or inclination or respect to write literature.

Most of us, as children, were probably taught that museums were places where we could learn about our pasts. But for many of us, our forbears and ancestors did not live in a way that would be preserved in a museum.  In museums of the future, you would probably not see our ten dollar K mart shower curtains or those twenty dollar fiberglass Buddhas in every aspiring middle-lower class household a decade ago. What you see are the unused things – the beautiful handsewn ballgowns and crinolines in Werribee mansion, the silverware of rich Victorian-era, a piece of art from MoMA or a preserved Queen Anne façade on a Toorak house. We do not see disposables in museums – the worn out clothes of the poor, their scruffed shoes. These things would have been used until they were rags or scraps. You do not see their plates or cutlery. We only know how the Darcys lived, because Ruth Park lived this way herself for a number of years. This is the magic and necessity of literature – to preserve lives that would be lost forever through poverty and neglect.

As Ruth Park writes about the Darcy family in her autobiography, ‘in the midst of their dirt and poverty and fecklessness they contrived to be happy.’ They tried to live with dignity and kindness. When Rowena gets married, the Chinese neighbor, Lick Jimmy, brings her a bolt of pink silk, which the Darcys accept with warmth and gratitude. But afterwards, they laugh about it, and see what a waste it is – because it is pink, and only aboriginal women wore such garish colours. This is a family that has standards! But theirs was not a simple happiness.  Shirley Walker describes Park’s work as ‘classics of the vernacular, of the ordinary people.’ I love this book. I grew up in Braybrook, Victoria, where my best friend’s father was a One-Nation supporter who always helped my brother and I cross the road as kids, and saved the best party favours for us. I grew up at a time when the 1983 recession hit the Western suburbs hard, and the people who were kind towards us also looked at our ilk as ‘job stealers.’ I came of age when before she went on ‘Dancing with the Stars’, a red-headed politician said this of us in her maiden speech in Parliament: “they have their own culture and religion, form ghettos and don’t assimilate.” The same could be said of the working class poor in Australia of any race, since time immemorial. As a teenager reading Ruth Park, somehow her work hit the bright red target on my chest in a way Jane Austen never did.

Ruth Park does not put the pedestrian on a pedestal. She’s not trying to make you feel sorry for the Darcy family. She’s trying to get you to understand them not as caricatures, but as humans. She wrote Harp in the South at a time when the term ‘bogan’ had not come into existence, yet people still had the same wary attitude towards the working class poor. You can really feel her affection for these people, open and sincere, and not armed with steely weapons of sarcasm or irony. She is not known as the ‘Dickens’ of Australia without good reason.