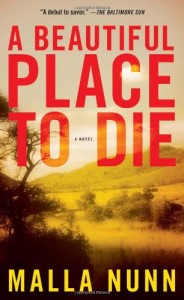 Opening Malla Nunn’s first book, A Beautiful Place to Die, one enters the segregated world of 1950s South Africa, where certain spaces can only be accessed by people of particular colour, information is offered cautiously, and much remains unspoken.  Through the character of Detective Sergeant Emmanuel Cooper, who moves across these spaces both legitimately and illegitimately, the reader learns of the social structure of the time and of the danger of transgressing place and class, as well as being kept in thrall by the story.

Malla was born in Swaziland and lived there until her family migrated to Australia when she was 11.  Her childhood, she writes in her post below, was ‘complicated’, but it has given rise to a series of nuanced and page-turning novels.  Although these are set in South Africa, there are elements that are distinctly Australian, with phrases such as, ‘The old Jew and the woman were as different as a gumboot and a ball gown’.  Her discussions of race have an echo in Australia, where Indigenous people were segregated from white people and forced to live in particular areas, often away from the country to which they belonged.

Malla’s move to Australia gave her the freedom to become an author and, despite the distance from her childhood – or perhaps because of it – helped her to contemplate her histories and influences.  As she writes, ‘No matter where we’re from or where we end up, stories matter. They are how we make sense of and engage with the world.’

Malla is generously offering a set of her Detective Emmanuel Cooper novels, A Beautiful Place To Die, Let the Dead Lie and Silent Valley, for an Australian reader who participates in our focus on women of diverse heritage this month.  Those who who read and review a work by an Australian woman writer of diverse heritage during October will go into a draw to receive this set of books, Alice Pung’s Unpolished Gem or Ruth Park’s Swords and Crowns and Rings, to which Alice wrote the introduction.  So send in your reviews – we’d love to read them!

‘Give me a child until she is seven and I’ll give you the woman.’ I love this quote, attributed to St. Francis Xavier and modified by me. It acknowledges the power of roots: of where it is that we came from. People often ask me why I live in Australia but write crime fiction books set in 1950’s South Africa. The answer is simple: deep, powerful roots that forever connect me to the colonial backwater where I was born and raised till migrating to Australia at the age of eleven.

At seven, I ran barefoot in the hills, swam in rivers and daydreamed. My memories are hazy but distinct, as if they were shot on 1970’s Kodachrome that’s only slightly faded. With little effort I can conjure up the smell of the land after the rains and feel the lazy heat of a summer’s day on my skin.

It sounds like an ideal childhood and sometimes I imagine that parts of it were perfect. Here’s the truth. For all my lyrical waxing on about ‘Africa,’ my childhood at the age of seven was complicated. Growing up in a British colony had a dark side.

I spent hours daydreaming but, ultimately, I knew exactly who I was in the great scheme of things: a mixed race girl who’d never be white. I’d grown up to be a nurse, a teacher, a small business owner and, if luck smiled, the ‘girlfriend’ of a white man with money. Writer? That wasn’t on the list of occupations suitable for brown and black girls.

Decades later, I live in Australia and work full time as a writer. I think on the Frances Xavier quote often. Is it accurate? Is it true to my own experience? I’m conflicted. Back then I didn’t know that writing was a job, let alone the best job ever. My world was small and the concept of living overseas, a dream.

I doubt that anyone could have predicted my future if they’d met me at the magic seven year mark. Yet here I sit, tapping away at a keyboard and writing novels in an entirely new continent from where I was born. If the ‘give me a child’ quote carries any water there must have been something in my disordered colonial upbringing that led me to writing. While it’s true that a dis-functional childhood provides rich material for books, not everyone who’s experienced a difficult childhood becomes a writer. One thing laid the foundations for the life I have now.

My family told stories. Some were hilarious tales of mistaken identity and vengeful wives, others sad re-counts of funerals or farming accidents. Stories were important; they carried weight. They made a difference to our lives. I understood that vaguely at the age of seven and I know it for certain now. No matter where we’re from or where we end up, stories matter. They are how we make sense of and engage with the world.

When we migrated to Australia, we brought our love of stories along with us and found that people from Ireland to Inverell shared that love. Our new home offered unlimited opportunities. I got a university education and double-majored in English and History. I travelled. Australia gave me the freedom to pick my vocation. I’m certain that, if we’d stayed in Southern Africa, I would have continued my love affair with stories but would never have become a writer. Over the years I’ve physically and mentally moved away from that seven-year-old child but the storytelling is the everlasting thread that ties the colonial girl and the Australian author together.

Perhaps my personalised quote should read, ‘Give me a child till she’s seven, throw in a love of story and a fresh start in a new land, and I’ll give you the writer.’