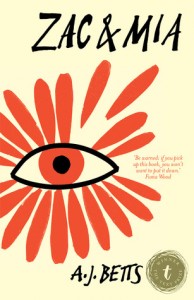 Teen cancer and transitioning from female to male; adolescent werewolves and stories which draw on an outback youth; racial tensions and fantasy adventures in suburbia; romance, horror, the “messy and real” – writing for Young Adults in Australia is marked by its diversity.

Many of the books reviewed for the AWW challenge in the second half of last year were published in 2013. These including Text Prize-winner A J Betts’ Zac & Mia, reviewed by VeganYANerds and Rochelle Sharp, described as a “teen cancer” story. Others are from earlier years.

Award winner Sonya Hartnett’s Thursday’s Child (Penguin 2000) is described by A Strong Belief in Wicker as historical fiction with a dose of magic realism”: “a powerful, moving story” with “beautiful writing [which] stopped me in my tracks on many, many pages”.

Dust by Christine Bongers (Woolshed Press, 2009) was named a Children’s Book Council of Australia notable book. Set in the 1970s in a setting which draws on the author’s childhood in Biloela, the protagonist Cecilia is “on the cusp of moving from primary school to high”.

Bongers has the knack of flipping the switch from larrikin humour to pathos. Of painting her characters in human strokes, the good with the bad with the damn frustrating. Of letting the time go by, incident by incident, letting the allusions grow as the illusions slowly fade. (From a review by Jason Nahrung) Several more recent novels portray aspects of suburbia, including Hate Is Such A Strong Word by Sarah Ayoub (HarperCollins 2013), the story of a girl from a Lebanese-Australian family who encounters racist stereotyping in reverse (reviewed by Bree). At times the suburbia depicted has a fantasy element, as in Cheryse Durrant’s The Blood She Betrayed (Clan Destine Press 2013), the debut novel in her Heart Hunter series. This book portrays “thrilling adventures in the everyday suburbs of south-east Queensland” (reviewed by Peta-Jo).

Elsewhere the mix of the fantastic and the suburban is deemed less successful; WriteReaderly describes Anna Dusk’s Un-Human (Transit Lounge 2010) as “an Australian vernacular narrative of adolescent girls being werewolves”: Other novels are portrayed as having a more serious intent.

Stevie Schafter is impressed by F2M: The Boy Within by Hazel Edwards and Ryan Kennedy (Ford Street Publishing 2009), the story of female to male transitioning:

One of the most interesting elements of the story was tackling anti-trans sentiment from a feminist character.  This is one of the main tensions in the book and I think it’s a smart and jarring inclusion.

This is a coming of age story where everything and nothing matters all at once. The hormones are so strong that you’ll find yourself fifteen again, looking wildly for that compass to stop the world from spinning out of control around you. It’s brilliant, and messy and real, set in a place that everyone will recognise even if you’ve never been there before. In total, there were 85 reviews posted as for Young Adults in the July-November period of 2013, so only a fraction of them can be sampled here. The rest can be found on the AWW Review Listing page.

Thanks to all the reviewers and to the people who took the time to seek out, to comment on their reviews and to post links on Twitter using the AWW hashtag. (This year it’s #aww2014.)

Thanks also to Mandy from VeganYANerds blog for her contribution to the round-ups in 2013. As Mandy is unable to fulfil that role in 2014, AWW is looking for a volunteer YA specialist to round up AWW YA reviews each month (or bimonthly) throughout the year. If you’re interested in becoming part of the AWW team, please let us know via the comments or direct message on Twitter @auswomenwriters.