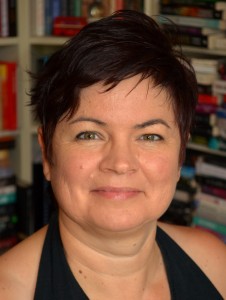 Two years ago, I slipped through a door into a convention room in Perth and sat down to listen to Katherine Howell. What intrigued me was part of the blurb for the session – Katherine Howell had been a paramedic for fifteen years before she had her crime fiction published.

That, to me, seemed impressive. She had all she needed to know about the system right at her fingertips in order to write a believable plot. And she still did research.

March is Diversity month here at Australian Women Writers and Ms Howell’s seventh novel to feature her detective Ella Marconi, Deserving Death, is now out with a lesbian as one of the main characters.

“I’ve had gay and lesbian characters in my books before but not as point-of-view characters, so I really enjoyed writing both Carly and Linsey,” Katherine tells me via email from over East where she’s got one week left on a writing deadline. Both plot and characters worked together in her favour in Deserving Death – the relationship creating issues that were central to the story.

“Carly is a paramedic and is out, while Linsey is her closeted girlfriend,” Katherine explained.

“I’m always looking for ways to put the characters under more stress in the stories, so using that issue of their relationship having to be secret, and Linsey desperately wanting to tell her family but being so afraid, was a good way to do that while also having Carly under pressure with her work situation and her suspicions about the crime.” Writing crime fiction is difficult and weaving a web, much like the sixth novel in the series titled Web of Deceit, where the detective can solve the crime and yet it still isn’t a cakewalk for the reader is a tough ask. And that’s assuming you have an idea in the first place. But for Katherine, inspiration exists everywhere.

“I think it’s the same for me as for many other writers,” she writes, quite candidly.

“A little seed of an idea appears, maybe in a newspaper article, or something we overhear, or something that pops up in our heads, then we start to think about where that could go, and what could happen next, and next, and next. I think about who’s dead and who killed them and why, and then about ways I can hide that from the reader and have them suspecting different people along the way and busting to find out the truth. It sounds quite a neat process there, but it’s not – there are lots of mental dead-ends and scrawling of notes on sheets of paper. Lots of frustration too.”

It’s nowhere near a neat process. Not for Katherine Howell, the steady routine of some other writers. It’s almost a relief to hear that she is quite human about the way she writes.

“I waste a lot of time dithering and feeling anxious,” she confesses, making it all the more amazing that she has graciously taken time out to answer questions despite having a deadline.

“Once I make myself get rolling I try to do one or two thousand a day, and sometimes that takes just a couple of hours, sometimes many more. I write best in the afternoon and every so often will write late into the night if I get into the flow of it.”

And then there’s humour: “Every year I promise myself I’ll be more disciplined. So far I haven’t been.”

But while it all seems quite normal so far, there are certain facts that leap out at you that speak a lot about how dedicated she is to writing. She wrote four manuscripts while studying, the last of which was sent off to an agent who returned it saying she needed to understand how to craft suspense. She then turned around and enrolled in a Masters degree to study how suspense was created in fiction and applied it to her own manuscript. When she graduated she sent it back to the agent and the first Ella Marconi novel Frantic was published in 2007 and won the 2008 Davitt Award for best crime fiction.

“I’ve always loved reading, and even as a child loved the thought of writing my own stories that would draw a reader in just as I was drawn into the books I read. That’s what I still love about it now, and when I write I think about what the reader might suspect is happening, or be expecting to happen next, and try to turn that on its head to keep them guessing, and reading.”

And would she ever stray from the love affair she seems to have concocted with the crime fiction genre? Would she ever write other stories? She admits to the affair readily enough:

“I love crime fiction! I read a lot of it and it seemed quite natural that that’s what I would write. I’d certainly be open to writing something else if I had the urge, but so far there hasn’t been one.”

Perhaps that’s because there is no need for that urge when her current one is uniquely hers and still going strong – Ella Marconi is the mainstay throughout the series but the paramedics differ. It’s a strange setup but nevertheless a useful tactic providing something both familiar for readers and yet introducing something new each time. But it came about because she wanted to use her fifteen years of experience riding in ambulances and dealing with blood and death firsthand.

“I couldn’t work out a way to write a crime series with just paramedic characters, so developing a detective character was really the only option to make it all work,” she writes.

Ella herself was baptised from a baby book and the White Pages: “I knew she had to be tough, as a woman working in the male-dominated police for so many years, and that she’d be idealistic — which can get her into trouble — at the same time as being cynical, frustrated and bored of the red tape,” she says.

“I chose a first name from a baby name book, a name that was not masculine/ambiguous. I wanted something distinctly female – then went through the White Pages for a surname that felt right.”

My last question is whether she has advice for other writers. For her, that’s an easy answer: “To never give up.”

She clarifies: “It’s easy to think that a first draft is awful, and to give up right there. The people who succeed are the ones who’ll work on it to make it better, and edit over and over again, put it aside and write something new and then edit that over and over.”

Tenacity. Persistence. Determination. With seven novels under her belt, a range of diverse characters scattered through them, a personal history of using a Masters degree to teach herself how to improve her writing, this is a writer who knew what her goal was from the start and puts everything into her work.

And now you have seven novels to read and review for Australian Women Writers while we wait for Katherine Howell’s next book.

Which presumably she is pulling all nighters to write, right now.

You can find Katherine Howell’s novels at her website. Her latest novel Deserving Death is out right now.

Marisa Wikramanayake is a freelance journalist, writer and editor. She published her first book at 17, has lived on three different continents, been in ground zero of a bomb blast twice and is currently based in Perth, Australia. She’s also been freaked out by the Scientologists, helped run national publishing conferences and currently sits on the Society of Editors (WA) and WA Media Alliance committees. She writes book reviews for The West and the ABR, science news for Science Network WA and writes novels in the spare time that’s left over after painting, dancing, gaming and mentoring. She contributes her two cents as non-fiction editor at Australian Women Writers and lends her geek goddess expertise to the Guys Read Gals project and the Society of Editors (WA). You can catch her on her blog at marisa.com.au or on Twitter @mwikramanayake