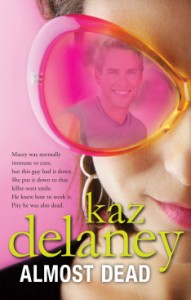 2014 was a great year for non-speculative Young Adult books in the Australian Women Writer’s challenge. All up, there were 84 reviews in this category – about 5% of all reviews and about 45% of the total YA reviews submitted. Which books were most reviewed? Turns out there were quite a few popular books in 2014 –  Cooper Bartholomew is Dead by Rebecca James, Zac and Mia by A.J Betts, Almost Dead by Kaz Delaney, just_a_girl by Kirsten Krauth and Looking for Alibrandi by Melina Marchetta all collected three reviews each and another 12 books were reviewed twice. It’s particularly interesting to see Looking for Alibrandi in that list, considering that it was first published more than 20 years ago. It was rereleased with a new cover in 2014, which hopefully introduced it to a whole new group of fans. I hope more ‘older’ YA books get the same treatment, especially with YA being so discussed at the moment. There were 35 different reviewers showcasing Non-Speculative YA books in 2014. The most prolific reviewers were Bree and Jess @ The Never Ending Bookshelf with 8 reviews each. Aussie Owned and Read and Welcome to My Library each contributed 6 reviews and Rochelle Sharpe wrote 5 reviews. What does 2015 hold in store? There’s growing excitement about the third book in Ellie Marney’s ‘Breath’ series – Every Move, which is coming out in March – now is a great time to read and review the first two books in anticipation. There’s also another Rebecca James book – Sweet Damage – due in the same month and a Karen Wood book – Under the Flame Tree – due out in September. I would also anticipate reviews for books published over the past couple of years as they are recommended by fellow readers or as series are consumed.

It’s wonderful to see the Non-Speculative YA category doing so well and I hope it continues to grow in 2015. It’s a category full of passionate and thoughtful reviews and it’s notorious for adding to my to-read list as well as the to-read lists of others.