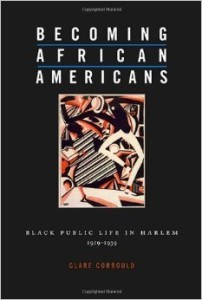 There were an eclectic mix of books reviewed in this category during the first few weeks of the year, ranging from academic texts of weight, to memoirs of comedians and a gun-toting mum, to a significant biography of Aboriginal identity Mum Shirl. Some of the reviews were in-depth, others barely more than a few lines; some were laudatory, others… not. Becoming African Americans presents a compelling history informed by the public life, popular culture, and literature of the black people of the United States and the Caribbean.

While Corbould’s study is comprehensive, there are some elements of the study Stevenson would like to see investigated further, particularly the implications of theoretical discussions for black women:

The rich analysis at the foundation of Becoming African Americans is to be commended; even so, certain questions still arose. Corbould draws attention to the way gendered language shaped the way black American historians and activists – largely men – approached Africa. If black American manhood could be reclaimed by a return to Africa, the African continent was feminised as ‘a motherland from which her children had been tragically torn’ (21). This normalised a vision of domesticity and motherhood which had restrictive implications for the active public engagement of many black women. While Corbould teases out this inconsistency, my personal interest in women’s history implored greater investigation of this particular theme. (Read the entire review here.) Janine Rizetti reviewed two books for the challenge this month, both academic texts. The first, a recent release (2014), also focuses on men: Karen Downing’s Restless Men: Masculinity and Robinson Crusoe 1788-1840. Downing’s text concentrates on the Australian colony, but her discussion, according to Rizetti, could easily apply to other settler cultures. Downing “finds examples of young (and not so young) men braving the seas to the colonies who identify with Robinson Crusoe, a book that they had read in their childhood which had become a wider part of the contemporary consciousness of the 19th century.”

Rizetti is effusive of her praise of this book, stating that she has encountered many of these “restless men” in her own work as a historian. She says of the book’s focus:

In structuring her book, Downing deliberately eschews a straight cause-effect relationship, and a similarly simplistic here-to-there trajectory. Nor is she treading a well-worn path: her book is an exploration of masculinity that doesn’t engage in the question of separate spheres, or the construction of male identity vis-a-vis women. Instead, she focusses on the ideas of manliness between men. (review here)

In concluding her discussion, Rizetti laments that the prohibitive cost of the text, warning the book probably won’t attract the readership it deserves.

Rizetti’s second review is of In Good Faith? Governing Indigenous Australia Through God, Charity and Empire 1825-1855 by Jessie Mitchell, which is available for free download as an ebook here. The review begins almost poetically, and appears to encapsulate the essence of the PhD thesis from which the text derives:

1825 to 1855- just thirty years. Thirty years to start off with a timorous hope that perhaps it might be possible to spread Civilization among the Aborigines and lead them to the Christian Religion, only to end with an acknowledgement that it hadn’t worked, and that the whole situation had to be turned over to God’s mercy and his wondrous ways.

Rizetti teases out some of the complexities of Mitchell’s discussion relating to the missionaries’ and protectors’ attitude towards the indigenous population, stating:

Missionaries and protectors saw the distribution of food, blankets and clothing as a form of recompense for the loss of land and livelihood, but it was conditional on the Aborigines remaining on the mission. The ‘settling’ of Indigenous peoples on a mission was seen by the government as a sign of success, but if it was done through the distribution of food, then the missionaries and protectors were accused of profligate generosity. The missionaries’ dilemma goes on today: there were many echoes of the current government’s attempts to break the concept of ‘sit-down’ money and achieve school attendance through punishing the parents.

As a narrative, the thirty-year time span gives a coherence and almost elegiac quality to this humanitarian experiment that was tried and found wanting.

In addition to academic texts, there were several memoirs reviewed for the challenge during this period. According to the reviewers, the results were mixed. Mel at Subversive Reader reviewed two memoirs by comedians. Of the first, The Fence-Painting Fortnight of Destiny by Meshel Laurie, Mel writes: “There are some books which should never be published. This was one of them… This was a whole life memoir of a not terribly interesting life.” Laurie’s comic voice left Mel cold: “She’s constantly going on about all the ‘frenemies’ who did her wrong over her life – without once talking about how her behaviour might have played a part in the relationships she had.” (review here)

Mel found Chrissie Swan’s Is It Just Me? Confessions of an oversharer more engaging:

The book is warm and gently humorous. There’s nothing which will really have you rolling around the floor laughing, but there’s more than a few smiles in it. There’s a lovely sense of love through the book as well – the author clearly loves her family, and it shines through on the page.

Another memoir reviewed for the challenge this month was Claire Dunn’s memoir My Year Without Matches:

In the tradition of Wild and Tracks, one woman’s story of how she left the city and found her soul. (from publisher’s blurb)

Reviewer Brad Adams panned Dunn’s book (giving it two stars on Goodreads), saying he couldn’t get through it:

There is a reason why the book is called My Year Without Matches: there isn’t really much else that she went without for the year. She used Skype and email, took a trip to town for caramel slice and a latte, and had bread delivered. I’m pretty sure that the bread wasn’t cooked on a fire caused by rubbing two sticks together. (review here)

(A more sympathetic introduction to Dunn’s account of her attempt to live differently is her interview with Richard Fidler on ABC radio here.) Adams also reviewed Mercenary Mum: My Journey from Young Mother to Baghdad Bodyguard by Neryl Joyce, which he seemed to detest even more than he did Dunn ‘s book (he give it one star):

The author made some major decisions in her life, but doesn’t describe the thought processes that went into making them. She joined the army at 18, but the reader has no idea why. She leaves the army to become a private security contractor in Iraq, but the only explanation she gives is platitudinous and uninformative. I’d like to know how one does such a thing. Did she respond to a job advertisement, send in a resume and cover letter, and attend an interview? Were there tests? What research did she do into the private security contract scene and this company in particular? (review here)

I’m always interested when a reviewer discusses more what isn’t in a book than what is; it makes me curious to know what the book is about on its own terms. (Again, Richard Fidler’s discussion with the author provides a more sympathetic introduction link here.) Jo Tamar chooses a very different approach to her Australia Day review of Mum Shirl: An Autobiography, choosing to quote extensively from Mum Shirl herself, rather than going into lengthy commentary. She quotes Mum Shirl’s account of her experience as an indigenous Australian enduring racism:

This is a book we can all learn from, not only about the events MumShirl describes, but how we can perhaps work together to try to fix the problems we have. Because unfortunately, while there have been some changes for the better in the nearly 35 years since this book was published, there are still too many things which remain the same.

We hope soon to have a database which will show all the reviews linked to the challenge this year.

Thanks everyone who read and reviewed for the challenge. Sometimes the reviewer’s job isn’t easy, knowing how to balance personal taste and critical objectivity (if such a thing is possible). The temptation in doing a round-up is to leave out the “bad” reviews, so I wrestled with including several here. In the end I decided to include them in the hope that they might arouse other reviewers’ curiosity. (Is it true, the old saying: “There’s no such thing as bad publicity”?)

About Elizabeth/Lizzy: My debut (short) romance novel Snowy River Man has just been released under my pen-name “Lizzy Chandler”. You can read more about it – and enter a giveaway – on my author blog here. I founded the Australian Women Writers Challenge at the end of 2011 with the aim of helping to overcome gender bias in the reviewing of books by Australian women.