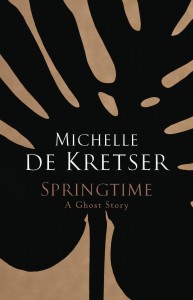 A new year, a new challenge website and a fresh batch of reviews. We’ve had people add 15 adult spec fic reviews already in 2015. What have they been reading? All sorts of things. It’s great to see such enthusiasm.

We had Carol@ Reading Writing And Riesling review Springtime: A Ghost Story, a novella by award-winning author Michelle de Krester. In her thoughtful review, she writes:

There is a playfulness in the competitive descriptions and comparisons of the two cities, Sydney and Melbourne that locals will appreciate and if you do not have local knowledge you will appreciate the internal chaos created by the unfamiliar compared to the stability of the familiar; feelings experienced when moving homes, cities, states or changing relationships or jobs.

and waxes lyrical about the presentation of the hard cover edition she read. deeply engrossing, very interesting, solidly-constructed Fantasy story whose consistently measured pacing is nevertheless gripping due to the oodles of tension and anticipation throughout.

The second and third books, Black Sun Light My Way and North Star Guide Me Home were reviewed by Mark Webb. He summarises the series in his last review:

Overall this is an excellent end to a trilogy. If you’re interested, definitely go back and start with Winter Be My Shield though. North Star Guide Me Home isn’t really a stand alone book, and you won’t get anywhere as near as much impact without having seen the characters through their earlier trials.

Also on the dark BFF (big fat fantasy) front, Karen Miller, author of The Falcon Throne and many other books, was reviewed by Dark Matter Zine.

Another BFF book and another first book in a series is Dreamer’s Pool by Juliet Marillier. Folly Gleeson reviewed this one, which has some fairytale echoes, and writes:

The physical and the emotional aspects of the story are powerfully expressed and keep the narrative moving smoothly. This is a book that makes the reader determined to discover what is happening and it is told in turn by the three main characters, Blackthorn, Grim and Oran, giving us a layered and insightful perspective into their thought patterns and their views of each other.

Jumping to an even more fairytale inspired fantasy, we have Bitter Greens by Kate Forsyth, which was reviewed by Jo Tamar. She loved the book and gives this high praise:

The craftsmanship of this book is quite incredible. It is a work of beauty, clearly based on strong research. In exploring multiple concepts of restriction and restraint, it also allows its characters and readers to understand the meaning of freedom in various forms – and of responsibility and, to some extent, love. There was a nice batch of science fiction reviews this month. Leonie Rogers reviewed Ambassador: Raising Hell by Patty Jansen, the second book in her Ambassador series. Leonie was a fan, writing

The more of Patty Jansen’s work I read, the more I like her writing. … It’s great to see a clever author writing good Science Fiction. I’ll continue to read Patty Jansen’s stories, and as five star reads, I’ll be reading them more than once.

The two most recent additions to Twelfth Planet Press’s Twelve Planets series — short collections of original stories — both garnered reviews from Mark Webb, who was on a bit of a roll. Of the varied collection Secret Lives of Books by Rosaleen Love, he writes:

The writing of this collection is superb. The language dances from sentence to sentence, and concept to concept. The stories are only loosely plotted, but that hardly seems to matter. While the ideas get more and more outlandish, the prose stays clean and pragmatic, which only adds to the deliberate dissonance of the read. And of The Female Factory by Lisa L Hannet and Angela Slatter, an exploration of the concept of femaleness and motherhood, Mark writes:

In most of the stories the collection puts a strong emphasis on fertility, and the mother-child relationship. It provides perspectives that I found fresh and very engaging. It is a mature treatment of topics that are often glossed over or ignored completely. The writing is very sophisticated, and the authors are able to draw the reader into the protagonist’s world view effortlessly, portraying them very sympathetically while still showing the warts and all.

On a very different note, Mark also reviewed the first half of Musketeer Space by Tansy Rayner Roberts. The first half because it’s a serialised novel (a gender-flipped Three Musketeers in space) that the author has been putting up chapter-by-chapter. It’s readable for free but also supported by Patreon backers. In his review, Mark writes:

The pacing is excellent, especially considering the need to stick to the overall structure of the original text. Roberts balances action with emotion in the stories, and has created some very well rounded characters that it is very easy to care about. This short steampunk novella by Aussie author Jenny Schwartz is thoroughly enjoyable. An intriguing plot about the street urchins of Victorian London and the horrors of the shadowy slums; a hint of romance and a whisper of the suffragette movement – all in all an excellent if ominous novella that I have no hesitation in recommending.