Children’s and Young Readers: Round Up Three (2015) 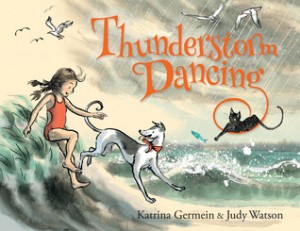 I am so very excited this month because – completely by chance and circumstance – we have a round up full of picture books! I’ve long maintained that we have brilliant picture book writers (and artists) in Australia, but it can be hard to find celebration of them outside of schools and libraries. So, I’m incredibly glad we can celebrate new books, award nominated books and slightly older books right here! Brona’s Books absolutely led the charge here with reviews of four new books. In Thunderstorm Dancing by Katrina Germein she saw the potential for further exploration:

“On the surface Germein presents us with a simple story about overcoming fears, in particular, the fear of summer thunder storms.
“But thanks to her rhyming, flowing, exuberant language, I can also picture the music and free movement dance lessons that could easily evolve from this story.”

How Big is Too Small by Jane Godwin is an exploration of comparison and size – Brona is predicting an award nomination for this one next year. (Just from the review alone, I can see it being used in lots of classrooms!)

Margaret Wild continues to entertain and delight children, as she has for years. Brona looks at two of her current releases. Bogtrotter (illustrated by ABIA winner Judith Rossell) is about a green round creature who likes running and routines but feels incomplete until challenged to try new things. Our Baby looks at sibling relationships, while taking care to use inclusive language and to look at different types of families. (Sounds like a great one for a brother or sister to be!) Jess also looks at a new release, Meet the ANZACs by Claire Saxby – the fourth in the Meet The . . . series. She really enjoyed this introductory look at the beginning of the war effort for Australian and New Zealander soldiers.

“It’s straight forward, and tells the facts about the early war efforts on Australian soil and how excited the country’s men were to be able to volunteer and serve their country. It’s simplistic in language, beautifully illustrated, and rather educational as well.”

Jess gives an excellent and thorough look at the content in the review, for those wondering about suitability for their children. As we’re right in the midst of award season for Children’s books, it was great to see Brona’s Books checking out two of the shortlisted picture books. In a little surprise, both the books are Christmas stories.

Little Dog and the Christmas Wish by Corinne Fenton in a 1950’s story about a little dog who gets lost in the Christmas crowds after a storm. Brona nominates it as her favourite from last year’s picture books, calling it nostalgic, joyful and tender.

Tea and Sugar Christmas by Jane Jolly tells us about Kathleen who is preparing for Christmas and waiting for the tea and sugar train to come by with a special surprise. Brona highly recommends it for all ages, but can particularly see a use for it as a resource for Primary schools.

Going to some (very) slightly older books, I reviewed the delightful Ruby Red Shoes and its sequel Ruby Red Shoes Goes to Paris by Kate Knapp. These are absolutely beautiful books which my son insisted on sharing with me, even though I’d intended just to read them on my own! In Ruby Red Shoes we are introduced to Ruby, her world and the philosophy her grandmother has used to bring her up as an Aware Hare. In Goes To Paris, Ruby and her grandmother go out into the world exploring. I was particularly struck by the first book:

“As soon as we finished reading it (well, around the time my son was insisting we read it again), I knew I wanted to share this little gem of a book with other people. With the friends who create little nests for their families, for my mother in law who would just fall absolutely in love with the chickens, with my mother who would fall in love with the art throughout and with other children who’d just like to step into such a beautiful world.”

It was truly wonderful to be immersed in the world of picture books by Australian women for this round up. I cannot recommend picture books enough when you are seeking out books to review. They’re easily available in libraries, they’re usually quick to read, but more and more they’re exploring dense themes and including interesting ideas which make for fabulous reviews. Our Australian women picture book writers deserve all the recognition they get within schools and libraries, but they also deserve the attention of those of us outside those fields.