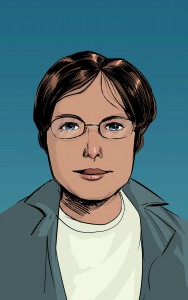 Over October, we’re holding a focus on lesbian/queer Australian women writers, and this week we’re very happy to feature Lee Winter, who has just released her book The Red Files. Lee is an award-winning newspaper journalist and in her 25-year career has lived in almost every state of Australia, covering courts, crime, entertainment, hard news, features and humour writing.

Her post below shares some similarities with Inga Simpson’s and Tricia Dearborn’s, in that it delves into the complexities of revealing one’s lesbian/queer identity on the page. Read on, and prepare to be entertained!

Blushing between the sheets

My boss at the mainstream newspaper where I work is 67 years old. She has a dyed, blonde-white bob, a love of fashion, a cutting tongue and a steely gaze that misses nothing. Her ex-husband is a tub-thumping, dog-whistling former radio shock jock, a bastion of conservatism.

So my boss, this boss, wants to read my book. My very lesbian book. The one where the beautiful crime-solving protagonists have steamy sex and no euphemisms were harmed in the process.

“It’s not for you,” I pleaded. “Two rival female journalists solving a mystery and, um, getting it on. Why would you want to read about that?”

“I have an open mind,” she sniffed. “The book name. Now, please.” She folded her arms. ite a book, any book, you are giving the world a piece of yourself with it. It’s revealing, exposing, and hard. You’re inviting everyone to sit beside your characters in their car, at their office, and to slide between the tangled sheets and stay there until the sweat dries. But if you’ve done it right, you should be proud and want to shout about your book from the rooftops.

I feel that way about The Red Files. I spent a year and a half pouring my heart and soul into it, making my girlfriend a writing widow while I researched everything from the price of brothels in Nevada to the names of five-star hotels in LA with atriums should one wish to fling an annoying fictional social writer into it.

I’m immensely proud of my story. There’s no lesbian I wouldn’t recommend it to. And therein lies the problem.

Gay, lesbian, bi and trans authors are faced with a dilemma. They have to decide just how much to share their literary baby with the wider world. They have to ask themselves: Do I blast a proud authorly declaration all over social media so everyone from Maria the cleaner to that random bloke I play online Scrabble with and that cat-video-loving ex-colleague from a decade ago will see it?

Do I share it with parents, Granny, my uncles and aunties? Or do I just slide an email across to that one suspect air-hostie cousin who’s never had a boyfriend?

This is more than just an instant, universal outing. Even if you’re out of the closet to everyone from the postie to your Great Aunt Mavis, it doesn’t necessarily mean you want them to read those vulnerable moments in your lesbian romance where your tender heart’s been stitched to your sleeve.

What if they laugh at those precious bits, or titter and squirm awkwardly at those unashamedly gay, sheet-bouncing times, and never meet your eye again?

Sigh. I’m 46. I remember never talking about, writing about nor hearing about gay people in Australia when growing up. There was an unspoken rule of “Fine, be gay. Just don’t talk about it”. I was clearly the only lesbian on the planet – until, suddenly, I wasn’t.

And now, well… Some kids today are flinging themselves out of the closet at eleven. They’re hitting school formals with their significant others at sixteen. They’ll probably be blasting their same-sex books to the public without hesitation, a year later, and CCing in Grandma, their former teachers and their entire Year 12 class.

Those kids are awesome. And you think, hell, they make a good point. Why be coy? After all, who hasn’t seen some sights they can never unsee in heterosexual fiction? How is my little lesbian mystery thriller being read by the straight masses any different from me reading the chandelier-swinging exploits from the mainstream world?

For me, it just feels different. For a start I know my straight friends, for lack of practical experience, will assume that’s how all lesbians like their pillow fluffed. Worse, how I like it.

I could write about serial killers and they’d never assume I want to shove a Glock in my belt and rack up my own body count. But write about sex and you hand mere acquaintances an unintended, vivid visual of your own sex life.

I have no doubt straight authors of racy books have this fear, too. But it feels that much more exposing to me because LGBT writers are so marginalised already and our stories are often sidelined as kink or taboo. This makes this process extra exposing. You’re on display. Like, Exhibit A: The Lesbian Sex Act. It’s so hideously awkward. And no one wants to feel that way at work. Or at the family barbecue. Or when being handed their mail.

So, in the end, I think it’s not that I don’t necessarily want the postman following my ladies snarking, solving crimes and steaming up the shower together.

It’s just, I discover, that I don’t want to know that he’s doing it.

So in the end I didn’t tell my straight friends about my book. The cleaner doesn’t know. The Scrabble guy remain I didn’t cough up the title to my boss, either. She persisted. She pulled out the big guns. She huffed and pursed her lips. She didn’t understand why. She didn’t understand that all my internalised, squirmy fears of feeling exposed and laying things bare that were never written for her are too confronting for me to share. That this, for me, is a precious, personal thing.

She’s moved on, anyway. The paper’s political writer has started up a garage band and his first gig’s coming up. My boss wants the band name. Now, please.

And she’s folded her arms.

The Red Files (Ylva Publishing) is out now on Amazon.