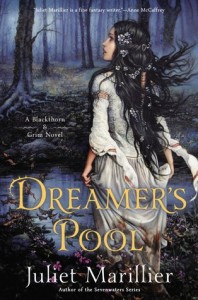 We had a pretty good review haul this past month, but most of the 14 new reviews were of fantasy books, with two science fiction novels and no horror. Good to see people reading! Maybe we need some new horror releases as motivation to branch out.

Where better to start with fantasy reviews than with this year’s Aurealis Award-winning fantasy novel? Tien @ Tien’s Blurb reviewed The Dreamer’s Pool by Juliet Marillier. She wrote

This world isn’t as dark as her other adult fantasy worlds though I still loved it as it was easy to read and enjoy. Dreamer’s Pool is a fascinating blend of mystery and historical fiction. … If you’ve never read Juliet Marillier and are not usually a fantasy reader, this is a good novel to start easing your way into fantasy.

In a convenient follow up, Sheree Christoffersen 26 Letters reviewed the second book in the series, Tower of Thorns. She enjoyed it and I encourage you to click through and read her lengthy review. Rather appropriately, given the inaugural Sara Douglass Book Series Award is currently being judged, Catsalive reviewed all three books in Sara Douglass’s Axis Trilogy: Battleaxe, Enchanter and StarMan. She clearly enjoyed them enough to read them all in quick succession.

On to something completely different, we had a lot of paranormal/urban fantasy books reviewed. Brenda was on a bit of a roll with three reviews this month. In alphabetic order, she read The Clairvoyant’s Glasses by Helen Goltz. She enjoyed it, saying

I absolutely loved Aussie author Helen Goltz’s first foray into the fantasy/paranormal genre with The Clairvoyant’s Glasses. Originally a crime/mystery author, which is what I first read and loved, it seems this author has excellent writing skills as well as a brilliant imagination. The Clairvoyant’s Glasses is a fast and entertaining read which ticked all the boxes; a gripping mystery, laced with light romance as well as the elements of paranormal. I have no hesitation in highly recommending this novel to all.

Next was Dressing the Dragon by Rinelle Grey, the sequel to Waking the Dragon, a series set in the Outback about a girl and her dragon shifter. Finally, Brenda reviewed The Second Path by Virginia King, the second book in the Selkie Moon series. She writes

Mystic, mysterious and intriguing, The Second Path is filled with psychological suspense and is a great addition which leaves me looking forward to #3 in the series. Highly recommended.

Jumping back into more BFF (big fat fantasy), Ellen Gregory reviewed Captive Prince and Prince’s Gambit by CS Pacat (both books in the one review). She writes

I felt emotionally invested in both characters and am desperate to read Kings Rising. There is still a huge amount of story to unfold as both princes reclaim their birthrights — and of course figure out their relationship with each other. Which isn’t going to be easy, given their respective identities and responsibilities. This may well turn out to be one of the great fantasy love stories…

I really like the combination of ‘grand fantasy epic’, with nations and kings and political machinations and battles, and the intensely personal.

Next up we had Elizabeth Fitzgerald reviewing Equilibrium by CS Sealey. She wasn’t a huge fan, but she expects that readers who enjoyed George RR Martin’s A Song of Ice and Fire will enjoy this book. The last fantasy book of the month was The Art of Effective Dreaming by Gillian Polack. Jennifer Cameron-smith reviewed it and while she enjoyed the book, she did not like the main character. She writes

While I enjoyed the way Ms Polack constructed Fay’s dream world (all those traditional songs) for much of the book, Fay herself annoys me greatly. … Leaving aside Fay, I enjoyed the layers of this story, the increasing sense that the barriers between real and imaginary worlds were mutable and permeable, rather than fixed and impenetrable. To Fay (just in case you are reading this): just remember that not all dreams can be controlled, and that there is good and bad in all worlds. There is also an art to effective living.

Our two science fiction books this month were quite different from each other. There was Aurora: Eden by Amanda Bridgeman and reviewed by Elizabeth Fitzgerald. This is the fifth book in a military science fiction series which Elizabeth has been enjoying. She says

The Aurora series continues to be an enjoyable read and I remain interested in following the story. In fact, I’m a little bit sad to have caught up with it because for the first time it means I’ll have to wait a while for the next book. The cliffhanger ending is going to make that wait especially hard. And finally, winner of the Most Underrated Book Award, there was A Wrong Turn At The Office Of Unmade Lists by Jane Rawson, reviewed by Julianne Negri. She loved it, saying

In “Wrong Turn and the Office of Unmade Lists” Rawson tenderly explores a raw grief, but is never awash with sentimentality. The internal logic of this universe is so wonderfully detailed and consistent that the reader is firmly planted in this future Melbourne. The speculative tangents that spring from Rawson’s mind have a solidity to them – a testament to the honesty of her language and characters.

And that’s all for this month!