Crime Fiction and True Crime: Round Up Six 2015 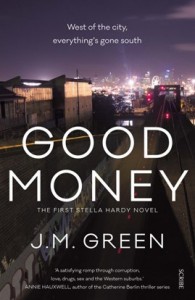 For 2015’s final wrap up of all things criminal as far as Australian Women writers are concerned we’ve got yet another eclectic selection from the Challenge’s readers.

J.M. Green’s debut novel GOOD MONEY was the most reviewed crime novel since the last roundup. The story focuses on the murder of a young boy. Karen Chisolm at Newton Review of Books says the book

…introduces Stella Hardy. A social worker by vocation, Hardy is the sort of laksa-loving, inner-city woman who fits into the role of accidental detective with considerable aplomb. She moves through the suburbs on foot, by tram and taxi, regardless of the weather and her own personal health, while sometimes reflecting back to her life as a young girl on a farm – and the lessons (harshly) learnt then…Reflective in private, a bit of an action woman when required, Hardy is a character able to carry this sort of book with ease

At Sam Still Reading Stella was a popular character too

It’s refreshing to have a main character who isn’t a jaded, chain smoking detective with a string of bad relationships under her belt. Sure, Stella likes the odd wine or whiskey, and she has made some dumb relationship decisions but it’s not the focus of her dysfunction. In fact, she’s pretty functional!

…was impressed by the cracking pace of Good Money and the tangled and sophisticated nature of the crime and corruption that unfolded. There were a few connections/associations that seemed a little bit of a stretch, but for me this was a worthy trade-off for an entertaining plot.

Another popular novel for reviewers this period was Sulari Gentill’s 7th historical fiction novel set in Australia in the 1930’s. Although I was incredibly slack and failed to review the book I did read it and it’s my favourite (to date) of a much-loved series and sees our series hero, Rowland Sinclair, taking on speedway racing and the investigation of a journalist’s murder. Carol at Reading, Writing and Riesling said of GIVE THE DEVIL HIS DUE

The sub-genre historical crime fiction is more than the re-imagining of an incident set in the past; when executed skilfully it is engaging, thought provoking and shares the authors passion for the era and their understanding of the society and culture of that period. Sulari Gentill’s passion for this era is obvious on every page. The tone, style and colour of this narrative paints an evocative and very visual account of Australian society in the 1930’s.

Catsalive stumbled across a little-known Australian author’s 1992 offering with Estelle Thompson’s DEATH BY MISADVENTURE. Recounting the tale of a young woman who becomes involved with the mysterious death of a stranger

These short Worldwide Mysteries are rarely great literature, but I enjoyed the story very much. Highly improbable, but not impossible, & greatly entertaining mystery, with a little bit of discrete romance thrown in. Lyn was dealing with the fallout from re-discovering a father who didn’t want anything to do with her, having built a new life for himself, & a mysterious letter intended for the owner of the property she was renting, from a woman fearing her life was in danger. I did have a pretty good idea of who the real victim was from the beginning but it didn’t detract from my enjoyment.

I always love it when a confessed non reader or lover of my favourite genre finds their way to a crime novel and Sue at Whispering Gums seems to have enjoyed her recent foray into “my” territory with her reading of Caroline de Costa’s DOUBLE MADNESS. Set in Far North Queensland the novel features a female detective, Cass Diamond, with an indigenous background tasked with investigating a murder. Sue writes

De Costa is writing about Far North Queensland, a place with a significant indigenous population, where it would indeed be poor form to ignore indigenous characters. My assessment is that de Costa has done it well. Cass makes some references to her indigeneity, and to some of the challenges she faces, but this is not her defining characteristic in the novel. She is “just” another police officer, and is defined as much, if not more, by being a single mother whose “fridge was a temple consecrated to convenience foods”. In other words, she’s in that band of job-jolly detectives who struggle to keep their personal life going, though Cass does a better job than most (that I’ve seen on TV anyhow).

When I read fiction, as I’ve said before, I look for some underlying messages or themes or issues being explored because I like my reading to further my understanding of humanity. Double madness is not, in this sense, a deep or enquiring book, but it is quietly subversive in the way it handles race and gender. Its indigenous characters are not defined by their indigeneity, and women detectives and medicos play important, but accepted and unremarked, roles in the investigation and resolution of the crime. Moreover, while the murder victim is a woman, she is far from the norm of murdered women victimhood. Good on de Costa.

I didn’t want to put this book down and it became my favourite book in this series. I was very much intrigued… probably less by the crime under investigation (the murder of the joggers) and as much by everything else happening in the novel—which I think has been the case with the earlier books. I think Fox’s crime writing repertoire is getting tighter with each episode in the series and also found myself more conscious of her writing in this novel.

I think I need to take Deborah’s advice and start at the beginning of this series.

Not that we really need reminding but Lorraine Campbell’s THE BUTTERFLY ENIGMA is one of those novels that makes a bit of a mockery of genre labelling, offering a mixture of historical. romantic and crime fiction all rolled into one. Set in 1960’s Melbourne it is the story of a woman whose past is a mystery, to herself and readers, and Carol at Reading, Writing and Riesling enjoyed it

I read this book as a powerful narrative about a strong women embracing the beginning of the feminist movement in Melbourne in the 1960’s – a woman who wanted to and did make decisions for herself, a woman who was comfortable in her own skin, a woman striving to be self-reliant, a positive woman and overall a very determined and pragmatic woman; I could not believe the choices she made in Rio. (No spoilers here).

So our final wrap up of reviews proves once again how diverse the crime and mystery genre is and what an amazing amount of home-grown female talent we have choosing to tell our stories in this way. Hopefully we’ve added a title or two to your summer reading piles…or perhaps some inspiration for your first reads for 2016’s Australian Women Writers Challenge.