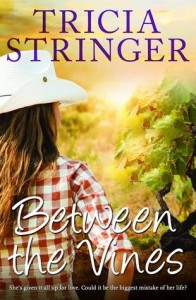 Welcome to the final roundup of Romance, Romantic Suspense and Erotica for 2016.

In the past couple of months we’ve had 15 books reviewed for this category, mostly of recent releases. Once again, rural romance dominates the reviews, backing up anecdotal evidence that this is the best-loved popular fiction genre in Australia today.

Reading Between the Vines, Brenda was most struck by the setting:

Set in South Australia and specifically the Coonawarra vineyards in the lower south-east, it felt like coming home to me. Mention of Naracoorte, Penola and Mount Gambier, as well as Adelaide – all places I know well as I’ve lived in most. (Full review here.)

Helena at Love Reading Romance also enjoyed Malone’s So Far Into You, and was struck by the novel’s unconventional structure, a gamble that paid off:

After only two of her novels, I’m coming to realize Lily Malone laughs in the face of my expectations of romance novel structure, and I need to start trusting that she has her reasons. (Full review here.)

Veronica Joy reviewed another recently released rural romance, The Wild One by Janet Gover, giving it a top rating. This one, Joy notes, has a serious element:

The story occurs in the outback town of Coorah Creek where everyone is just like family.

Dan has moved to the nearby Tyangi Park, as park ranger, to escape the nightmares that started after his tour of duty in Iraq. He prefers to live his life alone, cut off from everyone. That is until photographer Rachel Quinn arrives in town.

Gover focuses on PTSD in veterans and civilians, it is encouraging to know that this is being explored and made more open, also the culling of wild animals in our national parks. This is a very emotive topic and it is dealt with knowledgeably. (Full review here.)

This is an exceptional book; Fiona Palmer has created a country town that the reader can step into, a place where the characters are people you know and love (mostly), a place where family and community matter and woven into this rural scene are real and current issues. (Full review here.)

It comprises four m/m romance novels set on a massive cattle station in the Northern Territory (north-east of Alice Springs), and deals primarily with themes of ‘being gay in outback Australia’ and family.

Ellen is enthusiastic about the series:

I love this series, warts and all. It’s a marvellous depiction of what life on a cattle station might be like — the heat, the dust, the animals, the isolation. There’s plenty of horseriding, cattle droving, bore-fixing, akubras (hats) and RM Williams riding boots. And lots and lots of love — of various kinds. (Full review here.)

Another departure from conventional rural romance is Rachael Johns’ The Patterson Girls reviewed by Tracey at Carpe Librum. According to Tracey, this is Johns’ “first foray into a genre she herself calls ‘contemporary life lit’.” For Tracey, the shift has paid off:

The sisters aren’t a cohesive and trusting unit in the beginning and their dynamics and personal troubles were interesting to discover. In fact, I found myself enjoying The Patterson Girls much more than I’d expected, having been initially concerned there might be too much romance. The ending was also satisfying and who doesn’t love a family secret or a family curse? (Full review here.)

The remainder of the novels reviewed included older books as well as one 2015 release:

The last word I’ll leave to Brenda, who reviewed my second novel, By Her Side, written under my pen-name, Lizzy Chandler, and out tomorrow:

By Her Side is Aussie author Lizzy Chandler’s second novel, and it’s a great story of suspense and mystery; a police procedural set in Sydney and the Blue Mountains with an intense pace which starts at the very beginning. My only criticism is the continual sexual fantasising by the two main characters which spoiled it a little for me. But the gripping nature of the well-crafted plot kept me reading until the very satisfying conclusion. I have no hesitation in recommending By Her Side to lovers of the romantic suspense genre. (Full review on Goodreads here.)

And thank you, everyone who has contributed to AWW during 2015, whether it has been by reading only, or reading and reviewing, using the #aww2015 hashtag on Twitter, liking posts on the AWW Facebook page, or participating on Goodreads in either the AWW group or in Aussie Readers. It all helps to support and promote our many, varied and wonderfully talented Australian women writers.

PS If there’s anyone who would like to contribute to the AWW blog behind the scenes, whether by writing the romance round-up or attending to some administrative tasks, please let me know.

About me: My debut romance novel, Snowy River Man, was published by Escape in February 2015 under my pen-name, Lizzy Chandler. My second, By Her Side, is a romantic suspense and is due out tomorrow, 8 December. (It just got its first 5-star review on Goodreads – yay!)