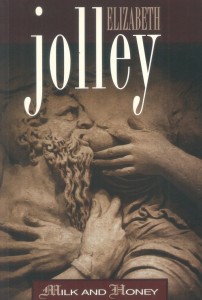 The 2016 awards season started last month with the announcement of the Stella Prize longlist. The shortlist will, in fact, be announced tomorrow, March 10, but I’ll report on that next month. I’m thrilled that of the 12 books listed on the longlist, 11 have been reviewed for our challenge. Go team! The twelfth is Fiona Wright’s book of essays, Small acts of disappearance. It would be lovely, whether or not it makes the shortlist, to see it also reviewed for the challenge.

A somewhat slow month with just 20 reviews, which is 9 fewer than we had last February – even though we had an extra day this year. Wah! But, don’t worry, I won’t be castigating you wonderful band of reviewers since my contribution this month was a woeful 1! People in glass houses, and all that! Fortunately, there are some worthwhile things to report:

Just one classic was reviewed this month, Elizabeth Jolley’s Milk and honey, which was published in 1984. It’s a borderline classic, and in fact our reviewer Amanda, writing on GoodReads, didn’t classify it as so, but, with Jolley now gone, and her first books now over 30 years old, I’m inclined to put these books in the Classics category.

Now, to the book. Amanda starts her review by saying “I came to this book knowing nothing about it, and I have put it down feeling very much the same”. She found the novel, which, like other Jolley novels, is set in an undefined place and time, rather confusing, but she says:

I don’t think that any of the confusion is a fault of the text. I think Jolley is being deliberately ambiguous in her writing, blurring a lot of the lines to give a sense of the very self-involved and sheltered lives these characters lead, how withdrawn they are from the world and how this affects their perspectives and actions, and perhaps stability.

Have you read Milk and honey? What do you think about it?

Just two of the 12 books longlisted for the Stella Prize were reviewed this month. One, Charlotte Wood’s The natural way of things, was reviewed twice, by Jennifer Cameron-Smith and Louise (A Strong Belief in Wicker). Like many people Jennifer found it an uncomfortable read, but writes that

I am in awe of Ms Wood’s ability to draw the reader into this world, learning gradually (as the women did) of what was happening to them.

Louise, too, found it uncomfortable. She writes:

It’s a sparse, unappealing story in some ways – profane, violent, mean, it makes for very uncomfortable reading at times. And yet I didn’t stop reading, I couldn’t. …  I can see how it isn’t a book for everyone. Still it’s a powerful story and well written.

This is a book that some readers are saying they won’t read because they believe it is unpleasant or confronting. And yet, for me, being confronted is one of the important things the arts can (and should) do for us.

The other Stella longlisted book reviewed this month has, in fact, only received one review to date – by expat Aussie journalist, Kim. The book is Jen Craig’s Panthers and the Museum of Fire, published by the wonderfully named small press, Spineless Wonders. Kim starts by saying that she “didn’t expect to read another book quite as surprising or as unique as Gerald Murnane’s The Plains” during her read-only-Australian-literature-year. Hmmm, this got my attention. She describes it as “fresh and bold and startling” but also a “reviewer’s nightmare”. It’s about a woman returning a manuscript, written by a friend who has just died, to that friend’s sister. She’s been asked not to read it. Interesting set up, n’est-ce pas? Kim concludes:

I really loved this book: it “wowed” me from its puzzling start to its satisfying conclusion. It took me on a real journey — in my head. It’s clever and wears its intelligence on its sleeve. It’s not a passive read, nor is it a sedate one. It makes you think and gives your brain a real work out. As a result, it may leave you exhausted — and breathless — but it’s worth every tantalising, carefully placed word.

I discussed Wood’s novel, one of this month’s three multiply reviewed novels above, so thought the other two also deserved highlighting.

I hadn’t heard of Eliza Henry-Jones’ debut novel In the quiet until I came to work on this post. It was reviewed by Kate (Books are My Favourite and Best) and Julia Tulloh Harper. Its premise is one that puts some readers off: the narrator is a mother who has died but is still “out there”, able to watch over and tell the story of her husband and children. (A bit like The lovely bones?)

Kate enjoyed much about it:

The language is simple (had it been too sentimental, this book would have strayed in to the hen-lit zone and out of my reading stack).

Overall, though, she found the plot unconvincing in places, and the voice a little detached. She’d read the author again though. Julia, too, liked much about it. She seemed to like the mother Cate’s voice:

What I liked about Cate (dead narrator) telling the story was the sense of personal specificity she brought to the story telling; she knows her kids, husband, friends, horses and property so well that many times I felt as pained and heartbroken as she did to watch everyone work out what it means to keep going after someone close to you has died.

Julia did, though, find the writing strained at times, but nonetheless thinks that it’s “one of the best and most sophisticated debuts I’ve read in ages”.

Dominique Wilson’s That devil’s madness is a second novel, and has an exotic (to we Aussies) setting, Algeria. It’s one of those novels which shifts between present and past, between Nicolette, an Australian photojournalist who goes to Algeria in the 1970s, and her ancestors who moved there searching for a better life in the late 1890s.

That Devil’s Madness simmers with emotional tension from start to finish, and paints a multi-layered portrait of conflict: idealism versus duty, friendship versus loyalty, war versus peace, tradition versus progression, male roles versus female roles.

She says that despite its setting in the late 19th century and the 1970s it’s very relevant today because these conflicts are still real. She concludes that “Wilson is an undervalued literary writer … I’d like to see her get some more attention.”

Sam (Sam Still Reading) enjoyed it immensely describing it as a captivating story that fully engaged her. She says:

The two narratives are expertly interwoven, Wilson has the knack of knowing at the right moment when to switch and when to offer a titbit from the past that explains why the modern characters are acting the way they do.

She concludes that “I know literary fiction can sometimes be tainted with the ‘dull’ tag but this novel defies the stereotypes and combines skilled writing with a fast paced storyline”!

Is literary fiction often dull? If you agree, what makes it so?