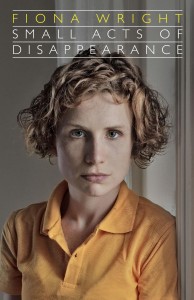 It’s easy to see that the end of the summer holidays and being back at work and school has affected everyone’s reading and reviewing habits.

February had only five HMB reviews for our consideration, down from 13 for this time last year. Hopefully, though, we will soon be inundated with reviews for the one and only non-fiction memoir on this years’s Stella Prize shortlist, Fiona Wright’s Small Acts of Disappearance (nudge, nudge, hint, hint)!

Small Acts of Disappearance is a collection of ten essays that describes the author’s affliction with an eating disorder which begins in high school, and escal

ates into life-threatening anorexia over the next ten years.

Fiona Wright is a highly regarded poet and critic, and her account of her illness is informed by a keen sense of its contradictions and deceptions, and by an awareness of the empowering effects of hunger, which is unsparing in its consideration of the author’s own actions and motivations. The essays offer perspectives on the eating disorder at different stages in Wright’s life, at university, where she finds herself in a radically different social world to the one she grew up in, in Sri Lanka as a fledgling journalist, in Germany as a young writer, in her hospital treatments back in Sydney. They combine research, travel writing, memoir, and literary discussions of how writers like Christina Stead, Carmel Bird, Tim Winton, John Berryman and Louise Glück deal with anorexia and addiction; together with accounts of family life, and detailed and humorous views of hunger-induced situations of the kind that are so compelling in Wright’s poetry.

The big plus for our five February reviews is that we will have the space to feature all of them in this post. Jennifer reviewed two HMB books this month. The first was Fair Game by Carmel Bird. The cover notes tell us that:

This long essay is an engagingly personal, playful and thoughtful examination of the arrival in 1832 in Tasmania of a shipload of women, sent to redress the imbalance of genders in that colonial settlement.

Jennifer explains that colonial history details are intertwined with Bird’s autobiographical stories of growing up in Tasmania and that “almost every page invites the reader to explore further.”

A Wealth of Women: Australian Women’s Lives from 1788 to the Present by Alison Alexander was Jennifer’s second choice this month. Her ability to track down interesting and diverse HMB titles is very impressive. Drawing on information provided by hundreds of families, as well as material and photographs from archives never before published, Alison Alexander has created an enthralling and different history of a nation. While famous women get a brief mention, this is mainly the story of the rest of us. It contains humour and despair, tragedy and considerable achievements, many of them unsung until now.

Alexander discusses individual women as well as groups of Indigenous women at certain moments in history. Hard work and child-rearing feature heavily in the early chapters; the impact of new technologies brings us into more modern times.

Christine @Voices Under the Sun reviewed Visiting the Neighbours: Australians in Asia by Agnieska Sobocinska.

It’s interesting to note that the three history books reviewed this month all explored the historical context of the region they were featuring, through the experiences of everyday people. It would seem that the history texts of my younger years that focused on dates, causes and effects and the leadership qualities of the main players are sl owly being superseded by relationship histories. Words like culture, impact, connections, encounters and attitudes are the new buzz words. Day to day interactions are more instructive than political manoueverings.

Visiting the Neighbours tells the story of Australian relations with Asia from the bottom up, examining the experiences of some of the millions of travellers and tourists who headed to the region over more than a hundred years. Merchants, missionaries, pilgrims, soldiers, hippies, diplomats, backpackers all had an impact on diplomacy and international relations.

Christine feels that Sobocinska’s work was a “thoroughly researched academic work. Elegantly written, unbiased and thought-provoking, it deserves to be read by every Australian who has ever wondered about our nation’s place in the Asia-Pacific region.”

Visiting the Neighbours was shortlisted for the 2015 Queensland Literary History Book Award.

The final two reviews for February were memoirs.

Brenda read Accidentally Istanbul: Decoding Turkey for the Enquiring Western Traveller by Nancy Knudsen which highlights Knudsen’s experiences of living in Turkey in 2004. And I added to the growing number of glowing reviews for Magda Szubanski’s Reckoning.

We have quite a few new memoirs to look forward to in 2016. To be published soon are sporting life stories from Gai Waterhouse, Michelle Payne, Jana Pittman and Margaret Court. Wendy Harmer, Kim Mahood, Yassmin Abdel-Magied and Maxime Beneba Clarke are writing their life stories about growing up in Australia. An autobiography on the life and times of Judith Wright is due out later this year and Suzanne Falkiner is publishing her much anticipated book about Randolph Stow.