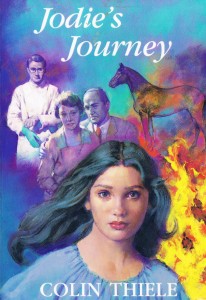 A while back I borrowed a stack of young adult novels from the library while I redrafted my memoir on my experiences of deafness (I lost most of my hearing from meningitis when I was four). They were all books I’d read when I was young, for a writing friend had suggested I read them as a way of reconnecting with the self that I was then. I ploughed through Robert C. O’Brien’s Z for Zachariah, Colin Thiele’s Clontarf and Jodie’s Journey, Tessa Duder’s Alex and Alex in Winter, and Libby Hathorn’s Thunderwith.

What has struck me, in going back to these works, is how all of them feature strong, independent, intelligent, female protagonists. I didn’t actively seek such books out as my mother shaped my reading until secondary school and I don’t think she had a feminist agenda, but they are certainly the ones that have stayed with me.

This is important, because statistics listed by The Stella Prize indicate that there is significant gender bias against women in schools’ syllabi. In the NSW HSC curriculum, for example, less than 14% of the books studied are those by women writers. This suggests that educators believe that women matter less, that their voices are not as important, that their explorations and achievements are less worthy of glory. Yet when young women do read of others like themselves, they experience a strong sense of affirmation – in my experience, at least.

One of the books I read when I was young, Jodie’s Journey, is about a girl with a disability. Jodie loves horses and is a brilliant rider, but she develops arthritis and is soon awash with pain, her joins swelling and distorting her limbs. Confined to a wheelchair, she can no longer ride and is treated with injections of liquid gold. I distinctly remembered this detail from my first reading of the book because I found it astonishing. My brother was also obsessed with rocks at this time, and sometimes when I put the book down to find out what he was doing, I would find him smashing pieces of quartz with a hammer to see if there was any gold within.

But the passage that struck me most was when, on a family holiday at the beach, Jodie’s brother carries her down to the water and leaves her in the shallows.

The water was pleasantly warm, and the tiny ripples rolling over her knees were as soothing as the gentlest of spa pools. She was sitting up with her hands spread on either side of her because she couldn’t bear the pain if she pressed them into the sand behind her and leaned back as she would have liked to do. She was glad that the incoming ripples hid the lower part of her body and disguised the knock-kneed angle of her legs.

Alan had left her sitting there on her own for a few minutes while he trudged up to the kiosk. She was wearing a black swimsuit and dark sunglasses and despite the effect of sand, salt and sun, her black hair had not altogether lost its gloss. She looked pretty (p. 68).

As she sits in the water, Jodie is approached by a boy of aged 15 or 16 who invites her to join his game of volleyball. She declines with panic, unable to explain that she can’t walk. I recognised that panic; it was the same I experienced when people became impatient with me for saying ‘Pardon?’ for the third time in a row, or when they thought I was simple because I hadn’t answered a question in the right way. I realised I would have to tell these people I was deaf whereupon, I was convinced, I would be shunned. My deafness was invisible, in much the same way that Jodie’s arthritis was hidden by the water. Although the scene was only one small passage in the book, it showed me that there were other people who faced similar problems to me, and I felt slightly less alone. Recently, I finished Kathryn Lomer’s Talk Under Water, a young adult novel about Summer, a deaf teenager, and her growing friendship with Will. As Will discovers how confident Summer is about her disability, his world opens up. I would have liked to have read a novel like this when I was young; like Jodie’s Journey, it would have been an antidote to my relentless sense of strangeness and alienation.

Last year, Bec Kavanagh wrote a guest post for AWW on the #weneeddiversebooksau campaign, which draws attention to young adult books that feature diversity. A conversation with Indigenous author Ambelin Kwaymullina prompted Bec to look harder for books by Indigenous writers, while writers such as Sarah Ayoub also point to the underrepresentation of migrant teenagers in young adult books. A LoveOzYA campaign was established to draw attention to issues such as this, and their excellent website is a great resource.

Given my own experiences of reading about young women with disability when I was a teenager, I think it’s crucial that fiction also features complex, believable characters with disability. Books like this are starting to appear – Sarah Kanake’s Sing Fox To Me is informed by Kanake’s familial experience of and research into Down Syndrome (and Sue of Whispering Gums has penned some excellent thoughts on this work) – but it would be great to see a wider circulation of young adult novels that feature characters with disability.

In her guest post, Amanda Tink writes that ‘the ethics around writing impairment and disability stories need to match those for groups such as Indigenous people’. To me, this means collaboration with people with disability and an awareness of the many facets of their lives. It means listening to and being respectful of their voices, and of giving agency to characters with disability. For, as Gaele Sobott notes in her post, writing that is aesthetically driven and influenced ‘by the lived-experience of disability … can only enrich and extend our cultural landscapes.’

I’m Jessica White, a novelist and researcher, and I’ve been deaf since age 4 when I lost most of my hearing from meningitis.  I have a PhD from the University of London and have published two novels with Penguin, A Curious Intimacy (2007) and Entitlement (2012).  I’m working on a memoir about Rosa Praed and her deaf daughter Maud. You can find more information about me at my website.  I’m also on Twitter @ladyredjess.