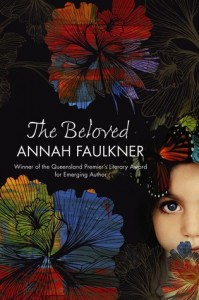 Well, what’s everybody been doing this month? Gardening, I’m thinking. Maybe the movies, because there were only 16 reviews this month of thirteen books. I thought we might have got up into the twenties but I’m very pleased to see a lot of new titles, with Brenda our top reviewer.

The first of the three books to be reviewed twice is The Beloved by Anna Faulkner, set in Port Moresby in 1955. “When Roberta ‘Bertie’ Lightfoot is struck down with polio, her world collapses. But Mama doesn’t tolerate self-pity, and Bertie is nobody if not her mother’s daughter – until she sets her heart on becoming an artist.” Jennifer at Goodreads found, “It is a thought provoking novel, and I’m very glad I read it.”  Anna at Goodreads writes, “This was a vibrant, beautifully written coming of age story with compelling characters.”

The second of the books is about a subject that is dear to my heart The War Bride by Pamela Hart. “January, 1920. Young Englishwoman Margaret Dalton is full of excitement as she arrives in Sydney to begin a new life in the warm, golden land of Australia.” Jeannette at readroundoz is enthusiastic. “The War Bride is one of those stories that makes you want to cheer and cry at the same time. A story of love and conflict, written from a historical perspective, The War Bride is a great read. Highly recommended.” Sam from Sam Still Reading was also impressed. “It doesn’t disappoint, bringing post WWI Sydney alive with some lesser known history in Margaret, the protagonist.” Now number 898 (yes I know it’s ridiculous) on my TBR pile at Goodreads.

The third book to receive two reviews in April is Precious Things by Kelly Doust. “A beaded collar, found scrunched at the bottom of a box of old junk. What’s its story? That’s what Maggie, a modern-day auctioneer in London, wonders when she finds the collar, cleans it, and recognises that once, long ago, it was someone’s precious thing.” Monique at Write Note Reviews found she related to Maggie, “juggling motherhood, marriage and the desire for a career…Other readers will relate to the other characters, some of whom have fleeting moments of narrative, but still manage to convey much about desire, love and things they hold dear.”  Tracey at Carpe Librum says, “If you’re a fan of Kate Morton, historical fiction, vintage items and dual timelines, then Precious Things is for you.”

Spanning the years from 1935 to 2009 is Castle of Dreams by Elise McCune. “A ruined castle deep in the rainforest holds a secret that unites three generations of women: two sisters who find themselves in love with the same man as the Second World War rages and, decades later, a young woman determined to uncover the secrets in her grandmother’s hidden past.” Brenda at Goodreads observes, “The characters are drawn in such a way as to make me feel I knew them; I cared about them and felt the emotions they were feeling.”

Heading back, just a tad, to Ancient Rome we have Call to Juno by Elisabeth Storrs which is the third book in the series Tales of Ancient Rome series. “Four unforgettable characters are tested during a war between Rome and Etruscan Veii.” Folly at Newtown Review of Books concludes, “Although this story explores the beginning of the Etruscans’ demise, we know that they underpinned the rise of Rome and there is an element of redemption and hope for the future in this fine example of historical fiction at its best.”

So peoples, how’s the reading going in this very unseasonally warm month of May? Perhaps you’re still out in the garden? Strolling along the beach? Or perhaps you’re dragging the quilts out of cupboards and checking your bookcase (or kindle) in preparation for winter. Just what books will you have your nose in very shortly, if not already, I’m looking forward to finding out.