Childrens and Young Adults: Round Up Three – 2016 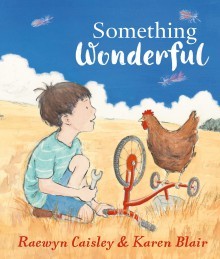 Welcome to a special two month round up! There’s some really exciting books, excellent reviews and enthusiastic reviewers to explore!

There were some extremely busy reviewers in the Children’s area over the past two months, most notably Jess from The Never Ending Bookshelf who reviewed nine different books. One of those books was My Friend Ernest by Emma Allen, the story of a young boy trying to be brave on his first day of school when he becomes intimidated by another boy.

“I really liked the messages this book conveyed. I loved the use of imagination and transformation through costume with the kids living out their costumed lives. Oscar, who dressed as knight in shining armour feared Ernest, the big dragon who was misunderstood. Rather than slaying the dragon, Oscar confronts the dragon on being scary and mean, and he learns that not everyone is as they first look.” Jess also reviewed Something Wonderful by Raewyn Caisley and Karen Blair, a book she describes as a celebration of being different and thinking outside of the box.

“Something Wonderful is a really sweet, contemporary and rural picture book that celebrates day dreaming, creative thinking and tinkering to explore what we can find and what we do. It’s a special little book that highlights the differences between people, while reassuring us that we are okay just the way we are.”

Other notable reviews from Jess include Don’t Think about Purple Elephants by Susan Whelan, an exploration of those worries which keep us awake at night and Dandelions by Katrina McKelvey, which explores a father and daughter relationship. Louise from A Strong Belief in Wicker added a review of the Jackie French book, Cyclone – a companion to the Fire and Flood books. While Fire and Flood look at relatively recent disasters, Cyclone is based around Cyclone Tracy in 1974. Louise describes it as “a moving, yet hopeful” retelling of the disaster.

Louise also reviewed 45 + 47 Stella Street And Everything That Happened by Elizabeth Honey, a suburban adventure story which was originally published in 1995:

“I’ve been intrigued by this book ever since I saw the cover quite some time ago. It’s quite distinctive. The story actually starts right there on the cover which is rather fun. Our narrator, 11 year old Henni is so keen to get going with the story that it starts on the cover. Stella Street is a typical street for an Australian childhood. The neighbourhood kids roam in a gang, everyone gets on, and life is pretty good. Kids always know their local neighbourhood best. “

“With the little that was recorded in the eighteen hundreds making it hard for any writer and historian to garner facts, the obviously meticulous research of this book kept me enthralled. Written in a way to keep the reader interested, the story of Nanberry is an excellent one. I have no hesitation in highly recommending this book, and will be looking for more by this author.”

Brona from Brona’s Books took a little step back into history and examined some past CBCA award winners. Here she examined Eve Pownell’s The Australia Book, a social history of Australia first published in 1952. Brona pointed out that parts of the book are outdated and Eurocentric, but, putting that aside, found it a great example of how to make history fun and informative. She also found herself fascinated by the author’s musings on the future – pointing out that comparing the author’s ‘now’ and our ‘now’ would make a fascinating classroom exercise. Two new books really stood out in the Young Adult category for the last two months. The Yearbook Committee by Sarah Ayoub looks at five different students attending a private high school who are thrown into working on the yearbook together. Amy was particularly impressed by the way the author used structure and characterisation:

“Ayoub doesn’t placate you with idealistic and fake endings; she offers you solutions and results, consequences and outcomes. And yet, there is also a delightful ambiguity remaining, taunting you with things left open and unanswered. Nothing that says there will be a happily ever after which is why, in those final emotional chapters when you can’t stand it anymore but have to keep reading, Ayoub delivers a realistic and perfect conclusion, one that suits these characters you’ve grown to love, one that feels real, one that crushes your heart and is feels just right, even when you’re trying not to cry.”

Monique talked about the timelessness of some of the themes in the book:

“Although The Yearbook Committee has modern touches such as short Facebook and Spotify updates to open each chapter, the retro camera on the cover emphasises how technology has changed but people haven’t. The issues facing Ryan, Charlie, Matty, Gillian and Tammi are timeless, from their relationships with the friends and parents, to their hopes and dreams as their future in the adult world looms.” Frankie by Shivaun Plozza has been another popular book over the past couple of months, with a number of reviewers writing long, thoughtful reviews. Amy talked about how invested you become in the characters, particularly Frankie herself:

“I’m not entirely sure if it’s healthy, but I got Frankie. I agreed with her philosophies and I admired her, even when she was doing wrong. Her determination is admirable and while your heart pounds and you personally feel the guilt when she disobeys her aunt, I loved her still. I love her attitude and her fierceness, plus her attempt to do the right thing in a world that hasn’t been that kind.”

“All too often, authors’ idea of being ‘poor’ is to not have the most expensive fashions and latest gadgets, being victimised by the cheerleaders and jocks. In contrast Plozza’s awareness of the socio-economic divide, her realism, makes my heart bleed. Frankie is a genuine representative for those whose families struggle, who themselves struggle to get through high school and who struggle to get through life.”

Julia also wrote a lengthy, thoughtful review, looking at how location, narration and characterisation worked throughout the book:

“The way the story illuminated the ways that everyone – even bullies (or perhaps especially bullies) – have deep and real problems that often stem from something out of their own control (like their upbringing, or parents’ treatment of them) was sad and convincing. At the same time the text was clear that individuals are also responsible for their immediate actions. The book balanced these things really well.”

Another YA book with more than one review was In the Skin of a Monster by Kathryn Barker which recently won the YA Aurealis Award. Reviewed by Tsana and Jennifer, both reviews touched on how the book surprised them and ended up being different to what they expected.  Jennifer wrote:

“I was surprised, and sometimes confused. But the more I read, the more I became intrigued. There are things Alice needs to understand, people she needs to think differently about.”

Tsana touched more on how the book transports the reader into a dream and nightmare world, taking the book beyond a contemporary read into the speculative world. She points out how the author uses this technique effectively, especially once the reader works out where the book is going.

Although, I do not have the space to go into the following reviews, I highly recommend going and checking them out! On a personal note, I’d like to introduce the reason for the special two month round up rather than my usual one month round up. My daughter, Ada was born at the end of April, and is already becoming a big fan of Australian Women Writers, with Where is the Green Sheep by Mem Fox the first book she experienced. She and her big brother are definitely keeping me busy, but they’re also giving me an excellent reason to read even more picture books by the fabulous authors we have in this country!