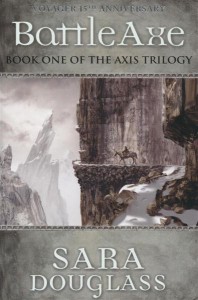 This year, instead of doing the same sort of monthly round-ups that I’ve been doing for the past four years, I thought I’d mix it up a bit and focus on a different subgenre of science fiction, fantasy or horror each month. This month, to start us off, I’m going to be focussing on epic fantasy or, as I like to call it, Big Fat Fantasy (BFF). Australia has a proud history of turning out excellent BFF since Voyager picked up Sara Douglass in the 90s (here is catsalive‘s quick review of Battleaxe, Douglass’s first book, which was published in 1995). Since then the fantasy scene in Australia built up significantly. Many of the authors who have contributed to the building up of Australian fantasy have been reviewed as part of the AWW challenge (it helps that Australia has had a respectable percentage of female authors being published when it comes to fantasy books). The below list is guided by recent reviews submitted to the AWW challenge and is by no means comprehensive. But it should give you some ideas of where to start if you want to explore more BFF books by Australian women. Glenda Larke has four excellent fantasy trilogies under her belt and one standalone novel. Most recently completed was the Forsaken Lands trilogy (see my review of Fall of the Dagger here), and most recently reviewed, by Lisa Cassidy was Heart of the Mirage, the first book in the Song of the Shiver Barrens trilogy. Larke’s other trilogies are Stormlord — featuring deserts and water magic, here is a review of the first book, The Last Stormlord, reviewed by Helen Venn — and the Isles of Glory trilogy, which came out well before the AWW challenge started and has yet to be reviewed. Kim Wilkins has written both novels and shorter works. She is currently mid-series with Blood and Gold. You can read my review of the first book of the series, Daughters of the Storm, which is really the first book of hers (that I’m aware of) that I would personally define as BFF. Not to say that BFF is inherently better or worse than other types of fantasy, it’s just what I’m focussing on right now. But the Blood and Gold series did have its start in a novella, which is part of the Year of Ancient Ghosts collection, for which you can read a glowing review from Sean The Bookonaut.

Ilke Tampke debuted in 2015 with Skin, a fantasy novel set at the time of the Roman Empire moving into the British Isles. The most recent review submitted to the AWW challenge is from Julia Tulloh, so go have a read of that while waiting for the sequel to drop, which will hopefully be some time this year. Foz Meadows has made a name for herself in the blogosphere with her online activism and critique, earning her a 2014 Hugo Award nomination for Best Fan Writer. More recently, her first BFF novel, An Accident of Stars, was released last year and the sequel is due in a few months. While we wait for that, here is Ju Transcendancing‘s review of An Accident of Stars.

These are just some of the authors that have been recently reviewed for the challenge. If you’re looking for more BFF books, some other authors to try out are Jennifer Fallon, Tansy Rayner Roberts (also writes comic fantasy), Trudi Canavan, Karen Miller, Rowena Cory Daniells, Jo Spurrier (a bit on the grimdark side) and KJ Taylor. (Sorry if I’ve forgotten anyone!)

Who are your favourite authors of big fat fantasy books? Tell us in the comments!