Historical Fiction: Round Up Two 2017 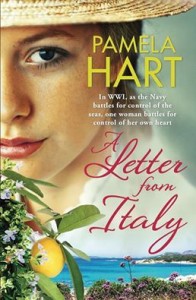 By far, our most popular Historical this month is A Letter from Italy by Pamela Hart. I’m quite excited about this novel and have been waiting eagerly for my pre-order to arrive.
Monique@Write Note Reviews commented on Hart’s ability to draw together two characters whose chemistry simmers for much of the novel, adding tension to those already present due to war and societal factors. Both are vulnerable and both have something to prove – not to each other, but to the wider community. With this enjoyable read of love, war and finding one’s place in life, Pamela Hart has done it again.

Lauren Keegan gave a thoughtful analysis with her review: A common theme in Hart’s historical novels is exploring the role of women in the early 1900’s, usually at a time when there was immense societal change. How relationships pre-war were tested (and possibly unsuited after the war) and the fighting spirit of women who wanted more from life than housewifery and breeding. This effusive thing called a career became very desirable- and within reach for women of this era, but not without many hurdles. The challenges faced by forward-thinking women in backward times is explored by Hart in a realistic, thought-provoking way.
Brenda from Goodreads absolutely loved it: A Letter from Italy by Aussie author Pamela Hart was utterly brilliant! Fast paced, original, heart breaking and real, the beauty of the Italian coastline was marred by war, but when viewed through Sandro’s camera lens it came to life. Captivating and poignant, I loved Nonna Rosa’s acerbic tongue which covered a heart of gold – also the children who were so eager to help for a coin. Pamela Hart is fast becoming one of my favourite historical fiction writers.

Newly released by Tea Cooper, The Currency Lass, scored an intriguing review by ReadRoundOz: I loved the era this plot was set in and I found myself so in character that I was riding with Sergey hoping he would be able to save the day. The question is, did he? You’ll love the answer and inhale the sawdust of the circus and the beauty of the bush by reading this enchanting story.

A few continuing favourites got another mention in the last month. Beyond the Orchard by Anna Romer was reviewed by Mrs B’s Book Reviews and The Beast’s Garden by Kate Forsyth was reviewed by Amanda @ Mrs B’s Book Reviews. If you haven’t read either of these novels, I encourage you to check out both of these reviews as they are quite detailed and will give you an excellent impression of each novel.

and the Dark Days Club, are impeccably researched. The voice is third-person narrative voice is well pitched, the Regency manners exquisite, and the description of the clothes tactile. You can almost hear the rustle of the women’s dresses. Despite the fact that, Lady Helen has supernatural abilities that take her into most unladylike situations, she never loses her Regency sensibilities.Take two handsome, well dressed upper-class men, one with a dark troubled past and a dead wife, whom he is accused of murdering, the other kind, protective and determined to save Lady Helen from the fate of the aforementioned wife, and you have a situation. Add in supernatural powers, a forbidden bond and the constraints of well-bred Regency society and you have dynamite. Having lit the fuse, Goodman lets it sizzle towards an agonizing conclusion, which left this reader crying no! no! no! As a consequence, I will now be hanging out for the next instalment.

As to what I read this past month, my top pick is Summer at Mount Hope by Rosalie Ham. I was a huge fan of The Dressmaker, but I understand how it might not have been to everyone’s taste. However, I feel Summer at Mount Hope is a much more accessible read and I truly hope that readers pick it up and give Rosalie another chance. If I had to sum this novel up in one word, I would label it as ‘delightful’. Summer at Mount Hope is a treat, from beginning to end. It’s witty, poignant, romantic, and a little bit heartbreaking, all rolled in together. It’s everything a good novel should be. There is a distinctive Austen/Pride and Prejudice feel to the story that works very well within the setting and time period. Rosalie Ham has depicted Australian rural life in the 1890s so well, with its ever present dust and vermin; the baking sun beating down on drought stricken land; the lifestyle of the itinerant ‘Swaggie’; the desperation of the Depression; the restrictions and dependency daughters had to endure, as well as sons who were not yet entitled to their inheritance; the balance between solidarity and rivalry that exists between people who live in close quarters. Beneath the witty dialogue and day to day incidents, an entire social tapestry lay exposed within the pages of this novel, and I felt that Rosalie Ham did an excellent job of bearing witness to it. You can read my full review over at Goodreads.

New Releases throughout February and March:
Goldbloom, Goldie. Gwen (Fremantle Press) – ‘novel inspired by historical character’, about the artist Gwen John.
Brear, AnneMarie. Nicola’s Virtue (Knox Robinson Publishing) – historical fiction set in NSW in 1867. AnneMarie joined us for Sunday Spotlight yesterday. If you missed it you can check it out here.

Burrows, Deborah. Ambulance Girls (PRH) – historical fiction. This book is the first of a trilogy dealing with three young women in the same Auxiliary Ambulance station during the London Blitz of 1940/41. The heroine of the first is an Australian girl from WA. Deborah will be joining us for Sunday Spotlight on the 2nd of April.
Dahlia, Renee, To Charm a Bluestocking (Escape) – regency romance. Renee was a recent author in our Sunday Spotlight which you can catch up on here.
Lester, Natasha. Her Mother’s Secret (Hachette) – Historical fiction, set in England and New York city, 1918-1939. Natasha will be a guest on our Sunday Spotlight on the 16th April.

Rawson, Jane. From the Wreck (Transit Lounge) – ‘novel inspired by historical character’. There are already some excellent reviews coming through for From the Wreck. Robin Elizabeth and Linda Godfrey were both hugely impressed by this book. I have a copy on my bedside table just waiting to be devoured.
Until next month, enjoy your reading and remember to link all of your reviews to the AWW blog so that other readers can benefit from your wonderful reviews.