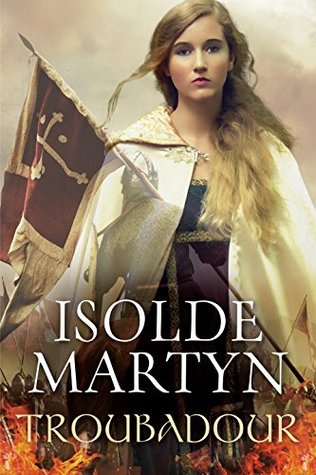 Congratulations on tomorrow’s release of Troubadour, Isolde. What was the inspiration behind your story?

Visiting the beautifully restored medieval city of Carcassonne in France and learning its history. The region is full of stories about the savage crusade of northern knights that invaded in 1209, looting, burning and persecuting. How would it have been trying to defend your land against such savagery?

Troubadour has had a long and bumpy road to publication. How difficult was it to maintain the necessary passion and enthusiasm along the way?

I threw out the original version. It was the wrong man as hero and the heroine’s motives were questionable. The basic plot, however, sat there patiently in the shadows while I wrote Mistress to the Crown and The Golden Widows, and as my parents’ quality of life rapidly deteriorated over in the UK, I didn’t have time to do fresh research for a new plot, so I rewrote Troubadour. The secret is to care very much for your main characters. Once that happens, you’re back in the saddle.

How do you balance the demands of getting the historical facts right with writing a ripping yarn?

My inner historian demands that the facts be in place first like a row of fenceposts set in concrete. The tendrils of the plot, the emotional story and the hero and heroine’s inner journeys are then woven in and out of the trelliswork.

As well as being historically accurate, how important do you think it is to be politically correct in your novels?

I think you’re talking about the character of Derwent! Today, it would be pc to call him a ‘short-statured person’ rather than a dwarf. However in the past, princes kept dwarves as a form of entertainment and in 1209, the likes of Derwent were regarded with fear and suspicion. I think it’s important historically to show the attitudes of the other characters within the dialogue but to keep the narrative objective.

One of the themes of Troubadour is religious tolerance versus the destruction of civilian populations in the name of religion. Given the seriousness of such a theme, was it a conscious decision to include humour in your novel? – the laundress is a hoot!

Some people crack jokes in the face of adversity. It’s their way of coping, so the humour in Troubadour isn’t a conscious effort, just part of human nature.

Which do you find more enjoyable, research or the writing process?

The research, definitely. However, a day of writing that goes well can have me purring.

Looking back over the eight historical novels you’ve written to date, if you could sit down to a long lunch with one of your characters, which one would it be, and why?

Christine, that is impossible to answer when you’ve fallen in love with most of your main male leads and been best friends with your heroines!

Which book is currently on your bedside table?

The Morning They Came For Us by Janine di Giovanni. I’ve just been to the Adelaide Writers Festival and was very impressed listening to this award-winning journalist’s comments on wartime experiences, especially in Syria.

How did it feel to win both a RITA award (the romance equivalent of an Oscar) in the USA plus the Australian mainstream Romantic Novel of the Year (now known as the RUBY) for your debut novel, The Lady and the Unicorn (aka The Maiden and the Unicorn)?

Travelling to Washington DC and winning a RITA award was an enormous high. I was proud to be the first Aussie author to win one, and couldn’t be more delighted that so many other Aussies have been given this honour since.

Winning the inaugural RUBY was also wonderful, and luckily my fears of it all being downhill from there were unfounded! If any aspiring members of AWW are thinking of entering for either award, go for it!

Thanks for your questions, Christine, it was a pleasure to talk with you.

Forced to flee the English court after the lecherous King John attacks her, Adela, the queen’s hairbraider, finds employment in the entourage of Lady Alys. Alys is on her way to marry the Lord of Mirascon, a fiefdom in southern France. However, the south is under threat from Pope Innocent III’s military crusade against the heretics.

After trying in vain to rally his fellow lords against invasion, Richart, Vicomte de Mirascon, makes an alliance with King John. A political marriage to the Lady Alys – the king’s discarded mistress – will allow Richart to safeguard his people from a merciless land grab and cruel slaughter.

When the bridal party is ambushed, Adela is mistaken for her dead mistress by the people of Mirascon. Adela knows she must tell Richart that she is not his betrothed, but as she is dragged deeper into the deception, she is also powerfully drawn to the beleaguered man trying to protect his people and his culture.. (read more about Troubadour here) Isolde grew up in London and has a History Honours degree from the University of Exeter, UK, with a specialisation in Yorkist England, a lifelong passion. Falling into conversation with a guy at a bus stop in Dorset, she found herself moving to Perth, Western Australia, half a year later. In Australia, she has worked as a university history tutor, research assistant and archivist. Her other career has been editing, and she was a Senior Book Editor with a major international publishing house before writing fiction full-time. Troubadour is her eighth book. She can be found via her website,

Christine Stinson is the author of two novels, Getting Even with Fran, and It Takes a Village.