Historical Fiction Round Up: Issue 3 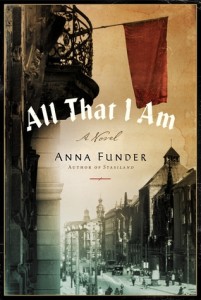 Historical fiction has enjoyed a steady following this last month, with many books previously highlighted continuing to gather more quality reviews from our AWW Challenge participants. Perhaps their enduring popularity can in some way be attributed to our challenge. It would be lovely to think so! Overall, we had 27 reviews of 18 books, with A Letter from Italy by Pamela Hart tying with From the Wreck by Jane Rawson as the most reviewed books with three reviews each. We had a few titles pop up that haven’t been reviewed previously, or not for a long time, so I thought I’d focus on these in this round up.

Theresa Petray reviewed All That I Am by Anna Funder:

Sometimes books find us at the right time – this one jumped out at me from the Library shelf when I was collecting Miles Franklin, and I knew nothing about the story. It is about the rise of Hitler in Germany and the resistance against the Nazis, and how populism turns into fascism. The story is beautifully told, and I loved the alternating perspectives and the shifting time.

What stood out about The Safest Place in London was the way in which Joel has chosen to offer her reader a contrast in characters. Joel’s central protagonists are polar opposites class wise and this enables the reader to receive different perspectives of the Blitz experience. I also appreciated how Joel provided contrasting war experiences of the soldiers featured in the story. While one husband is serving in North Africa, the other husband is based on a submarine. No matter what the story or experience, the tension was high. At the heart of this story is the human face of war. Joel explores the feelings experienced by those living the war at this time. The uncertainty, the desperation and the will to survive all emerge as common sentiments. The plot twist Joel delivers just past the halfway mark in the novel, places the characters, along with the reader, in a moral quandary. The Safest Place is London offers the reader a heart wrenching and profound study of the human experience of war during the Blitz. It is a refined piece of writing and will appeal to those who appreciate a well woven historical fiction novel.

Elise McCune reviewed newly published The Midsummer Garden by Kirsty Manning. The cover of this novel is divine and Elise’s review hints that the story more than lives up to this first impression:

The Midsummer Garden by Kirsty Manning is just the sort of book I love to read. It is set in two time periods; 1487 and 2014. It is an enchanting read and Kirsty Manning, who is a gardener herself, displays her love of plants and gardens…with its beautiful cover, it is a story that will keep you turning the pages long after you should have turned out the lights.

Christa A. Ludlow enjoyed The Insanity of Murder by Felicity Young:

Much of the appeal of this book and the others in the series lies in the historical background. In The Insanity of Murder we learn about medical treatment for women with “hysteria”, the dramatic sacrifice of suffragette Emily Davison, and the brutal horror of force feeding suffragettes on hunger strikes. We also see the prejudice, lack of training and racism in the police force. Despite the serious subject matter, the tone is fairly light and the book is an easy read with cozy overtones. There were a few points in the plot that were not resolved, and the villains tended towards stereotypes, but the story is intriguing and the main characters are endearing.

This brings me to my pick of the month, See What I Have Done, the chilling debut novel by Sarah Schmidt.

Ashleigh Meikle – The Book Muse and Cass Moriarty read this a few days after I finished, and we all agreed that it was an excellent novel by an author to watch.

A mixture of historical fiction, literary fiction and crime fiction, See What I Have Done evokes an atmosphere of mystery and intrigue and transports the reader to the late nineteenth century in America, and into a family where secrets are kept, and tensions felt deeply by all. Because the novel is told in first person, the reader gains insight into the minds of Lizzie, Emma, Benjamin and Bridget, and we see in Lizzie and through Bridget and Emma’s perceptions of her a woman who is childlike, who perhaps has not let herself mature, or who hasn’t been allowed to be mature – this is part of the mystery, why Lizzie became who she was. Perhaps losing her mother at a young age contributed, perhaps her sister’s protection became a factor. Whatever the reason, Lizzie is shown as someone who needs protection and understanding, to whom some things might not make sense.

The question of what to fear inside your own family, as well as from strangers, is examined, and indeed, the portrait drawn of the Borden family is dark and complicated; it is difficult to look away. Something Sarah Schmidt has done very well in this book is to make use of ‘white space’ – she does not tell us everything, even if she herself has decided her opinion on the matter, but leaves it to us to fill in the spaces between the words and come to our own conclusions. There has been a lot of pre-publication hype about this book, and I have to say I was drawn deeper and deeper into the intricacies of its characters and plot the further I read, until I too, wanted to know the macabre details of what someone had done.

Sarah Schmidt’s writing commands the reader to use all of their senses, even when you’d really rather not! The decadence of over-ripe pears set against the putrid mutton stew; those poor unfortunate pigeons; the decay of humans going rotten in their own skin. From the first page until the last, I was trapped in this gothic nightmare, held spellbound by its awful truth. This is Historical Crime fiction at its best, a perfect balance of fact and fiction, artfully rendered and beautifully unique.

We’d love to know your thoughts! Until next month, enjoy your reading.

About Theresa: I am an author of Australian Women’s Fiction, avid reader, keen reviewer, book collector, drinker of all tea blends originating from Earl Grey, and modern history enthusiast. I enjoy reading many genres but have a particular interest in Historical Fiction. You can find me on my blog, Theresa Smith Writes, Facebook, Goodreads, and Twitter @TessSmithWrites.