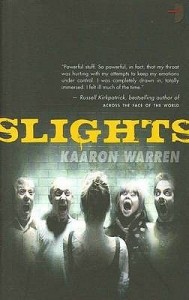 Horror is one of those genres that often gets overlooked in Australia. When I was dividing my AWW round-ups into fantasy, science fiction and horror, horror was consistently the least reviewed genre. But we have some great horror writers in Australia, many of them female. For a general overview of the best of the genre, you could have a look at the shortlists and winners of the horror novel and short story Aurealis Awards, or the Australian Shadows Awards, which focus specifically on horror. In the meantime, I’m going to highlight a few authors worth keeping an eye on. Kaaron Warren has won many awards for her fiction, including Aurealis Awards, Australian Shadows Awards and Ditmars. She has written a lot of short fiction, some of which has been collected in various volumes, such as Through Splintered Walls, which has been most recently reviewed by Ju Transcendancing. Her first novel was Slights, which won the Australian Shadows, Ditmar and Canberra Critics Awards, as well as being shortlisted for the Best Horror Novel Aurealis Award. For more about Slights, have a look at this review by Maree Kimberley. Kirstyn McDermott is another much-lauded horror writer with a string of awards under her belt for both her short fiction and her two novels. Her short fiction has been collected in Caution: Contains Small Parts, which was favourably reviewed by Sean The Bookonaut, among others. Her more recent novel, Perfections, winner of Aurealis and Australian Shadows Awards, was similarly reviewed by Kristian Thoroughgood.

Next up, I want to talk about some authors who write a mix of genres, including horror. Obviously, I’ll be focussing on their horror books. Deborah Kalin has written both fantasy and horror, in particular horror short stories, such as those collected in Cherry Crow Children, which I reviewed a while ago. Angela Slatter writes a mix of dark fantasy and horror, depending on where you want to draw the line between the two. Her short stories have been most recently collected in A Feast of Sorrows (my review) and her first novel, Vigil, is an urban fantasy mystery with significant horror overtones that has been reviewed by Folly Gleeson, among others. In the Skin of a Monster by Kathryn Barker is YA horror and the author’s debut novel. It also won the Aurealis Award for Best Young Adult Novel and has been reviewed by Jennifer Cameron-smith. The Bone Chime Song and Other Stories by Joanne Anderton is a collection containing several horror stories, and the collection itself won Aurealis and Australian Shadows Awards. David Versace has reviewed it. Ishtar is an intriguing book: an anthology of three novellas following the past, present and future of the goddess Ishtar, written by Kaaron Warren, Deborah Biancotti and Cat Sparks, all categorisable as horror. The anthology was edited by Amanda Pillar — whose other anthologies also have a horror bent to them — and has been reviewed by Elizabeth Fitzgerald, among others.

As always, this isn’t a complete list of all the female authors writing horror in Australia. Some other authors who sometimes write horror are Deborah Biancotti, Margo Lanagan, Kim Wilkins, Janeen Webb, and Helen Stubbs.