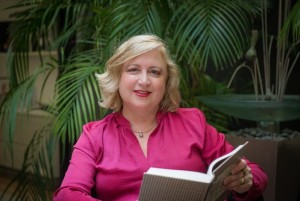 When did you start writing and what was the catalyst?
I began to write in 2010, when my ninety-year old mother entered a nursing home. I had always been intrigued by her stories of living through the Second World War on the “home front” in Perth. It was a time she remembered vividly. I knew of no other novels set in wartime Perth, and as I am a historian I wondered if I could use some of my mother’s stories, backed up by my own historical research, to share my love of my home town and inform people about some of its recent history. As I enjoy reading murder mysteries, I decided to try this genre.

How many novels have you written and published?
Ambulance Girls is my fourth novel, and my first to be published by Penguin Random House. It is the first of a trilogy about women ambulance drivers in the London Blitz.
My three previous novels are: A Stranger in my Street (2012), Taking a Chance (2013) and A Time of Secrets (2015) (all published by Pan Macmillan Australia)

How long on average does it take you to write a book?
Around a year.

How has being Australian AND a woman impacted on your writing and/or writing career?
Being an Australian woman gave me the impetus to write in the first place. There are no other novels I know of that are set in wartime Perth and very few set in wartime Melbourne. Although Ambulance Girls is set in the London Blitz, the main protagonist is proudly Australian.

What authors and types of books do you love the most?
I love murder mysteries, the old favourites: Raymond Chandler, Dorothy Sayers, Agatha Christie, Dick Francis. I also like the gentle mysteries of Mary Stewart, and the regency romances of Georgette Heyer (and the original and the best, Jane Austen). Modern Authors I like include Liz Byrski, Marian Keyes, Ann Cleeves, Donna Leon, Sulari Gentill, Kerry Greenwood and Dan Aaronovitch (for a bit of magical mayhem).

What is your favourite childhood book? Did reading as a child have any bearing on your decision to become a writer?
My favourite book as a child was Rilla of Ingleside by L.M. Montgomery, which sets out the experiences of a young woman on the Canadian home front during the First World War. I only realised that Rilla was probably a major influence on my first novel this year, when it was suggested to me during an interview by a Canadian academic. I loved all of L.M Montgomery’s books, especially the three “Emily” books, which were about a girl who wanted to be a writer.
When I was a child, I was never without a book. I wrote ‘sequels’ to my favourite books in my head and imagined stories of great complexity and humour! In fact, I was a writer who did not write all through my childhood and my teens.

What inspired your most recent book?
The idea for Ambulance Girls came from a 1941 newspaper article headed: “WA Girl is ARP Heroine”. It was about a young woman called Stella O’Keefe who was the first Australian A.R.P. [Air Raid Precautions] worker in Britain to be presented to the Queen for outstanding bravery in the London Blitz.
Stella drove an ambulance throughout the Blitz, and when I read the article, I found that the character of Lily Brennan – the heroine of Ambulance Girls – and her story appeared pretty much fully formed in my mind.

How much research do you do? As an author of Historical Fiction, how do you balance the demands of getting the facts right and telling a good story?
I have several history degrees and as a graduate of Oxford University I am able to use the Bodleian Library’s amazing facilities whenever I am in the UK. I adore historical research and generally immerse myself in a period and a specific area (London for Ambulance Girls) in enormous detail before and during the writing process. The problem then is how far to pull back in order to not let my research overwhelm the story. It’s hard to balance those competing demands and I rely upon my editor to tell me if I’ve gone too far one way or the other.

Do you read your book reviews? Do you appreciate reader feedback and take it on board, even if it is negative? How do you deal with negative feedback after spending so much time writing your book?
I read every review, even the negative ones. I try to take feedback on board – although what one reader detests is often what another reader adores. The main problem is not obsessing on the reviews of those who find fault. I have had to learn to accept that every reader is different and it is impossible to please everyone. And even the negative reviewers have engaged with (and hopefully bought!) the book. But negative reviews do hurt…

How much planning do you do? Do you plan / plot the entire story from beginning to end, or let it evolve naturally as the writing progresses? In terms of characters, are they already a firm picture in your mind before you start writing or do they develop a personality of their own as the story progresses?
I usually have two or three themes in my mind before I start writing, and I can’t start the process until I have visualised a few scenes that will be crucial in the book. I always know how it will end. I find that the first few chapters usually come easily and by the 10-20,000 word mark I feel confident about my characters, who they are and how they react to various situations.
I then write out a detailed synopsis. This is my “road map”; it lets me know the direction the novel will take and the major incidents that will occur in the story. I stick closely to this synopsis as I write, but I always have a great deal of “wriggle room” so that my characters are able to (and do!) head off in unexpected directions. But they always end up exactly where they ought to be in the end.
Every character develops during the writing of a book, often in surprising ways. I write in the first person and, until I find my main character’s ‘voice’, I sometimes flounder a bit. If so, I ‘shoot scenes’ in which I set out the narrator’s back-story, her childhood, the events that shaped her. Sometimes these end up in the novel, but sometimes they are for me alone to know.

Have you ever had to deal with a situation where someone feels they recognise traits of themselves in one of your characters?
No – thank goodness!! I find that some of my characters have characteristics of people I know or have met, but no character is based on any one person.

Can you tell us something about yourself that not many people would know?
My great-grandfather came from Finland. He was Carl Wilhelm Mattson (son of Matts – they used patronymics), and was a sailor who ‘jumped ship’ here in 1872. He stayed in Australia, became a miner and took the name of Charles Williams. (It was a bit of a shock to find this out when doing the family history as I’d always assumed that Dad was of Welsh extraction.)

If you could go back in time for a year, which historical era would you choose to live in?
Probably the 1920s. I like the music, the fashion and the sense of optimism.

When did you discover the Australian Women Writers Challenge? Do you think the challenge has had any impact on the awareness and discoverability of Australian Women writers? Have you personally benefited in terms of exposure of your work to new readers?
When I joined Goodreads in (I think) 2012. It is a wonderful initiative, as it brings Australian women writers to readers’ attention. I have read many books because they were featured in the AWW Challenge and I am positive that I have personally benefitted from its exposure of my work to readers.

About Ambulance Girls:
As death and destruction fall from the skies day after day in the London Blitz, Australian ambulance driver, Lily Brennan, confronts the horror with bravery, intelligence, common sense and humour.
Although she must rely upon her colleagues to carry out her dangerous duties, Lily begins to suspect that someone at her Ambulance Station may be giving assistance to the enemy by disclosing secret information. Then her Jewish ambulance attendant and best friend, David Levy, disappears in suspicious circumstances. Aided, and sometimes hindered, by David’s school friend, a mysterious and attractive RAF pilot, Lily has to draw on all of her resources to find David but also negotiate the dangers that come from falling in love in a country far from home and in a time of war. Ambulance Girls is published by Penguin Random House.

Readers are already enjoying and reviewing Ambulance Girls. Tein@Tein’s Blurb loved it and is looking forward to the next instalment in this new historical series: Firstly, I do love this cover and I really like war historical fiction especially when this particular book’s main character was inspired by a real life historical Aussie woman serving in the London Auxiliary Ambulance Station during the Blitz. There were a lot of things I learnt from this novel about women during the Blitz. I guess there have been quite a number of books or even documentaries but the way it was written here made it all the more real to me. It was obvious that a lot of research was done in the writing of this novel and not just about the women or the Blitz as novel itself feels like veritable literary tour of London. If you loved the show, Call the Midwife, or the books that inspired it, you would love Ambulance Girls. Lily Brennan may not be English but she’s as brave as those midwives in facing uncertainties & adversities of the time. And I dare say that her Australian personality shone through especially against the foil of English reserved façade.

Historical fiction fans might be interested to attend the 2017 Melbourne Historical Novel Society Australasia conference on 8-10 September. The programme features over 60 speakers: HNSA Conference Speakers. You can read interviews with some of the participating authors at the HNSA Blog.