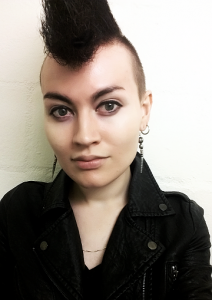 Over May we’re hosting a focus on lesbian/queer women writers, and we’re very happy that Eden S. French has penned some excellent words for us. Eden is an award-winning novelist and graduate researcher. She is presently signed to Queer Pack, a new diversity-focused imprint of Ylva Publishing. A sultry genderqueer rascal, she is the author of two lesbian fantasy romances – The Diplomat and Fruit of the Golden Vine, both published by Bella Books – and the forthcoming Reintegration, a trans-themed post-apocalyptic cyberpunk thingy. The only thing she enjoys more than writing about queer cyborgs is the certain fact that, someday, she will become one.

In her marvellous post below, Eden writes about escaping into books, at first for succour, and then for power, reminding us of literature’s capacity to transform.

I spent my school years in libraries, as many queer children do. The shelves offered real protection, secret tunnels for the bookish few, and the librarians kept vigilant. They were subtle guardians, in fact, so that I often forgot it was they who watched over me; it was as if the books themselves kept my persecutors at bay.

My Catholic school library held a surprisingly rich supply of fantasy novels, including a Christian-flavoured series that pitted adventurous teenage archaeologists against terrors from the Book of Revelation. I found much more joy in the Chronicles of Prydain; I yearned to have a bauble like Eilonwy’s, and Arawn reminded me of Sauron but in a more digestible form. (I read the Lord of the Rings too early, and so loved it while not quite understanding it.) At home, I consumed Discworld novels, not getting all the jokes but amused anyway, passively absorbing adult ideas that served me well much later. At the same time, however, I suffered from an increasingly tenuous grip on reality. In my early teens, I genuinely believed that anything could become true if I thought about it too closely. I became paranoid about my own dreams and writings, and I suffered chronic nightmares (and still do). Too young for Alien, I found a movie picture book with endless photographic plates that reproduced the experience in the most lingering way possible; every rumble of my stomach soon became a potential chest-burster, and Xenomorphs hunted me in my sleep. Obsessed with adding to my night terrors, I went through my mother’s horror collection of Graham Masterton, Ramsay Campbell, and Stephen King. Eventually, I found H. P. Lovecraft, and my love of fantasy and fascination with horror combined into a terrible, amorphous thing.

I suffered daily dread, insomnia and sleep terrors, and woke sobbing from nightmares, and I wonder now if I wasn’t self-harming through horror fiction. But though I was a haunted child, I was also an active one. I wrote tens of thousands of words each week, and I shared prose with an online mailing list of other writers. This activity—and two early MMOs, The Realm Online and Everquest—formed my entire social life. I became a young teen with countless penpals, nearly all of them all adults, and every one of us communicated via fiction. My love of fantasy, horror, and science fiction (I was captivated by the inscrutable Neuromancer) bridged the divide, and I felt privileged to know that older, wiser people valued my own writings. Such feelings of self-worth were, after all, very rare.

Then the depression came. I no longer cared, though the rote mechanics of Everquest still occupied me. I dropped out of school. I ceased writing.

Was I depressed because I stopped writing, or did I stop writing because I was depressed? My suspicion now is that my means of escape—into the library, the books, my writing—had become insufficient. Schoolyard bullying took on far crueller dimensions as I matured into middle adolescence, and in that gender-and-sexuality conscious world, I turned out to be a greater misfit than I had ever imagined.

In my early twenties, my depression eased, but I found myself no longer able to write fiction. Then, sometime around my twenty-eighth birthday, I was urged by my girlfriend—who had grown tired of straight male fantasy heroes—to write a lesbian fantasy story. So I wrote a novel, The Diplomat, which was later published by Bella Books, and chose not to fight momentum. Now my third queer novel will be republished in November, and I am entering the second year of a doctorate in Creative Writing at UTAS. All well and good for me, perhaps, but this rush of creativity left me unsettled as well. Had I simply overcome ten years of writer’s block? Or had I somehow recaptured my adolescent power to escape through writing?

There is a stigma around the notion of “escapist” literature, as if such writing were not genuinely engaged with real issues. Tolkien himself elegantly rebutted this: “in what the misusers are fond of calling Real Life,” he wrote in 1939, “Escape is evidently as a rule very practical, and may even be heroic … Why should a man be scorned if, in finding himself in prison, he tries to get out and go home?” I find this argument especially compelling from a queer perspective. We cannot ever escape from Real Life; if you are queer and the world knows it, closing your eyes does nothing to hide you.

Romance novels are often termed “escapist,” yet they do not present pictures of love untroubled by disaster. On the contrary, one of the key features of the genre is that the central relationship is tested to the point of near-collapse. It is the promise then of a happy ending—that sacred contract between romance writer and reader—which allows romance to fulfil its promise of escape. Romance escapism offers not a sanctuary, but rather a guaranteed victory over loneliness.

Similarly, my own novels engage with misogyny, homophobia, and transphobia, yet I cannot imagine myself writing a story in which such forces win out. Not even as a cautionary tale. The triumph of bigotry is the present master-narrative of our world; what queer person needs a tragic dystopian novel to shock them into awareness? We are besieged, and any tolerance—let alone acceptance—feels provisional.