Patsy Adam-Smith: Set with the Seal of Wanderlust 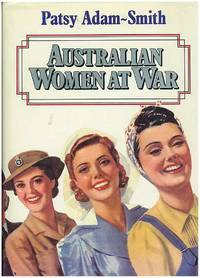 Continuing our series on classic and forgotten women writers, Dr Robyn Greaves features Patsy Adam-Smith who was born this day in 1924. Thanks, Robyn.

Very few people these days have heard of Australian writer Patsy Adam-Smith (31 May, 1924 – 20 September, 2001), yet in many ways she was a trailblazer for women. In conservative 1950s Australia, Adam-Smith defied convention, stepping outside the traditional, feminised space of the home to earn a living from writing. She embarked on a roving existence on the road and at sea, often living and working as the only female amongst a group of men. Adam-Smith considered herself a “born writer” who gave her life to her work. She published across a range of mediums and genres. She worked as a freelance writer for newspapers and magazines and wrote two books based on her travels, Moonbird People (1965) and There Was a Ship (1967), as well as two collections of stories, Footloose In Australia (1973) and The Barcoo Salute (1973). She wrote two volumes of autobiography, Hear the Train Blow (1964) and Goodbye Girlie (1994). The Anzacs (1978) won the Age Book of the Year Award (and was recently reviewed for the AWW challenge by Yvonne Perkins). Australian Women at War (1984) was once a prescribed text in schools. She was recognised for her contribution to recording the stories of ordinary Australians, receiving an Order of Australia (AO) in 1994 for service to community history, particularly through the preservation of national traditions and folklore and recording of oral histories.

Adam-Smith identified with “ordinary” Australians, having grown up in remote areas of South Australia where her parents worked for the railways. Hers was a working-class childhood in which resources, including money and water, were scarce and communities were small. She describes having to hide her love of reading and the difficulties of being able to write at all due to the negative attitudes of those around her to reading and writing and the scarcity of paper. She discovered in her teenage years that she had been adopted, which contributed to the sense of exclusion she felt throughout her life. Adam-Smith’s formal education in small bush schools ended at the age of thirteen. She was largely self-taught, gaining what she calls her “introduction to education” through books ordered in for her by the librarian in the small Tasmanian town of Ulverstone where she lived as a young married woman.

Adam-Smith left home at sixteen to join the Voluntary Aid Detachment (VAD) during the Second World War. Less than three years later, she married a soldier whom she met in a Queensland hospital. On his medical discharge toward the end of the war, Adam-Smith found herself obliged to move to Tasmania to live with her new husband’s family. She was plunged from tropical Queensland into the cold climate of Tasmania and a world of “old people as opposed to the vital warm youth [she] had lived with for so long”. She described feeling “earthbound, pegged out like a sacrifice” and the object of disapproval in the small northern Tasmanian community of Ulverstone, a complete contrast to the time she served as a nurse in the military hospitals, which for her was “a time of excitement, fun, horror, pain, love and purpose”. Along with the difficulties of adjusting to a new home and married life, Adam-Smith found the 1950s “surely the most uninteresting, soul-destroying decade Australia has passed through”. Despite (or because of) the restrictions she felt were imposed upon her, Adam-Smith looked beyond her personal circumstances to create opportunities to make life more bearable. Through writing, she created a life of movement to escape what she experienced as the subordination and strictures of domesticity.

Adam-Smith approached the Australian Broadcasting Commission (ABC) in Hobart and became a “stringer” from 1952 – 1955, reporting on various happenings in the north of the island, and writing articles for a number of popular magazines. This was when her son, Michael, was seven (Michael was born in 1945 when Adam-Smith was twenty-one), and daughter, Cathy, was three (Cathy was born in 1948). Her marriage broke down in 1955 and Adam-Smith moved south to Tasmania’s capital, Hobart, taking Michael and Cathy with her. Over the course of her time in Tasmania, she traversed the island by land and sea. She visited Lake Pedder before it was flooded, and travelled by steam train along the wild West Coast. An assignment from The Tasmanian Government Transport Commission to sail as a guest on the Naracoopa led to six years living and working at sea aboard small coastal trading ships. Adam-Smith’s time on these small ships that navigated the Tasmanian coastline provided an unconventional lifestyle and entertaining material for her writing. In 1960 she was appointed Adult Education Officer in Hobart. Once again, Adam-Smith threw herself into the role, expanding the courses from cake decorating and dressmaking to more scholarly pursuits such as ancient history and physics. She left Tasmania in 1970 to take up an inaugural position as Manuscripts Field Officer for the State Library of Victoria, a job she held for twelve years. She never lived in Tasmania again. In later years, her movements were dictated by her health. She had developed asthma while living in Hobart and spent periods of her life in hospital or in the warmer climate of north-western Australia. All the while she maintained her interest in people and recording their stories.

Despite her success, Adam-Smith felt on the margins of the literary establishment; she was neither an insider nor a complete outsider. In Goodbye Girlie, for example, she writes: “There has never been much time in my life for me to socialise with the writing world” (210). She then goes on to list the various well-known “establishment” people with whom she did mix—including a long-term friendship with famous Australian wartime surgeon, Sir Edward Dunlop—in what could be seen as an exercise in name-dropping. She had an association with the Melbourne-based Bread and Cheese Club, a (male) Australian art and literary society led by J. K. Moir (book collector and literary patron). In 1977 she was invited by the Literature Board of the Australia Council, in partnership with the Department of Foreign Affairs to travel to the USSR on a cultural exchange of writers with novelist Barbara Jefferis and playwright David Williamson. However, despite a successful career overall, Adam-Smith has received little critical attention or recognition for her work, which is regrettable. She felt impelled to “preserve the documents and words of our people” which she felt were in danger of being “expunged as though they had never been”. She treated her life as an ongoing education, fuelled by her wanderlust and endless curiosity. She used a variety of forms to broadcast her experiences and explore conditions for women and working-class Australians in the modern nation. Her legacy to Australian folklore, history and literature is a valuable contribution to the nation.