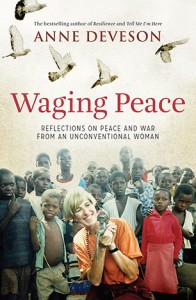 The month of June saw eighteen books reviewed in the History, Memoir and Biography category, with memoirs again constituting the majority of reviews. Three memoirs, from three different time-spans and countries, explored the juxtaposition between war and peace. Yvonne Perkins reviewed the late Anne Deveson’s memoir Waging Peace, subtitled “reflections on peace and war from an unconventional woman”, published in 2013. The memoir is divided into two parts. In ‘Encountering War’, English-born Deveson travelled as a nine-year-old in 1940 with her mother and brother to Malaysia, to join her father who was working there and to escape the bombs of WWII England. Shortly afterwards, they fled to Australia. In the second part of the book ‘Seeking Peace’, the reader meets Deveson in adult life, where she worked on peace activism, among other things. Yvonne wrote:

Waging Peace is not a regular memoir. As I read I wondered how I should describe it. Deveson wrote about her life, but not with the level of introspection we commonly associate with memoirs….I think of Waging Peace as a ‘thematic memoir’. It has a greater purpose than simply telling the story of the author’s life. Anne Deveson shares her life only as much as is needed to explore her thoughts about her theme, peace. (Review here) Baba Schwartz emigrated to Australia in 1958 with her husband and sons after a short stay in Israel after WWII. Her memoir The May Beetles: My First Twenty Years, reviewed by Jennifer Cameron-Smith, tells of the first twenty years of Baba’s life “of which her Holocaust experiences are a part.” Jennifer found “the contrast between her life between the war and her experiences during it make those experiences more harrowing”. She found this memoir Olivera Simic’s war experience springs from a more recent war: that of the former Yugoslavia in the 1990s. Born in 1973 in Banja Luka the second-largest city in Bosnia and Herzegovina, Simic grew up in a “a heterogeneous multicultural, multilingual and multireligious community.” She was in Serbia during the 1999 NATO bombing and has lived in Australia since 2006, working as an academic writing on genocide, war crimes and trauma. Janine Rizzetti reviewed Simic’s memoir Surviving Peace: A Political Memoir. It is not a continuous chronological narrative, but instead is organized by chapters titled as paradoxes and opposites. Janine described it as “a memoir of the intellect… analysed from an academic perspective, and interwoven with literature, history, genocide studies, trauma studies, human rights and peace studies”. Two memoirs reviewed this month were written by white women, reflecting on their engagement and relation to contemporary indigenous culture and lifestyle. Kim Mahood, whose book Position Doubtful was reviewed by Sue from Whispering Gums, spent her childhood on a cattle station run by her parents, but which is now owned by the local Warlpiri people. Now an artist and map-maker, working alongside indigenous people in the Tanami Desert region, Mahood’s book is

a story about communication and negotiation, about sharing knowledge and understanding, about layers and multiple meanings, and above all, about respect for other while standing one’s own ground. The way Mahood navigates all this – the accommodations and understandings she works through, socially, personally, intellectually, scientifically, artistically and philosophically – is, really, what the book’s about….

not exactly an easy read, but it’s a thoroughly engaging one. As memoirs go, it’s a strange hybrid, combining wonderfully warm and sometimes funny anecdotes about the people she meets and travels with, oral histories, indigenous creation stories, poetic insets, travel writing containing beautiful descriptions of landscapes, and of course her introspective reflections on who she is and what she’s doing. (Review here) Cathy McLennan’s memoir Salt Water deals with her time working for the Townsville and Districts Aboriginal and Torres Strait Islanders Corporation for Legal Aid Services as a new barrister, quickly given responsibility for a confronting case. Despite the book’s dramatic subtitle ‘An Epic Fight for Justice in the Tropics” Jonathan Shaw points out in his review that

in so far as it suggests a grand fictional narrative, it’s certainly misleading. This is Cathy McLennan’s account of the first months of her employment as a brand new barrister. A non-disclaimer after the title page begins, ‘This book is a personal account based upon real events, real crimes, real people and real court cases.’

At every turn, Aboriginal people are struggling to do right by the young ones, but their efforts are thwarted by the result of the damage they have suffered and by indifferent, even hostile government bodies. Nor does she propose solutions: this is an account from the front line of a non-Aboriginal person trying to be of use, and coming hard up against the horrors (not too strong a word) of some Aboriginal lives, not a political tract. (Review here) Two of the memoirs read this month dealt with television personalities.  The late Ruth Cracknell will be familiar to many of us from ‘Mother and Son’, but in Journey from Venice, she writes of a more personal dilemma when her husband falls gravely ill while they are overseas in Venice. In her review, Sanchie@Living my Imperfect Life wrote:

While I didn’t mind the book, I must admit, I think it got through publication because she is a famous actress. A lot of the writing appears to be her diary entries and while her writing is good, there is no structure and it lacks substance. Yet, at the same time, there are some moments that make you stop and think. (Review here) In a more recent memoir The Good Girl Stripped Bare journalist Tracey Spicer traces through her humble beginnings in Redcliffe, her early career as a journalist and her rise to fame as a TV presenter. In her review, Cass Moriarty noted that

Tracey demystifies the ‘good girl’ (as opposed to the good woman) as a label that we should neither aspire to nor fall victim to, especially when applied by others attempting to keep us ‘in our place’…. Tracey shouts from the rooftops that feminism is NOT a dirty word, that women support and inspire each other far more often than we put each other down, and that it is the responsibility of all of us who have the privilege of freedom, power, means, good health, wealth and opportunity to speak out and be the voice for those who don’t. (Review here) The term ‘celebrity’ would not sit well with Martin Sharp, the Sydney artist who created cartoons, paintings, graphic design and collaborative ‘happenings’ in the 1960s, but resisted selling his work and believed galleries to be elitist and passé. A student at Sydney University in 1961, he circulated among the “precociously talented” group which included Germaine Greer, Clive James, Robert Hughes, Richard Walsh and Bruce Beresford.  In Jeannette Delamoir’s review of Joyce Morgan’s biography Martin Sharp: His life and times, she noted Morgan’s “dispassionate approach” that “doesn’t attempt to psychologise, scrupulously presenting his eccentricities without judgement”.

Joyce Morgan’s version of Martin Sharp’s life presents an important portrait of the man and his times – the explosive cultural revolution that began in the 1960s. Wisely, the book neither pigeonholes him nor bestows a mantle of greatness. Instead it shows him as an equal among an astonishing milieu of avant-garde cultural giants. (Review here)

And finally, two histories, both collaborative efforts drawing on the skills of several noted Australian historians. The first, the classic Creating a Nation 1788-1990, was published in 1994 and is reviewed by Deb Lee-Talbot. Creating a Nation was the first national historical study written from a feminist perspective. Each chapter is written by an individual, yet the consistent theme is to consider the impact of women-driven social movements upon the environmental, social, cultural, political and economic landscapes of Australia.

…The history which McGrath, Quartly, Grimshaw and Lake created continues to challenge authors to represent diverse Australian narratives based upon gendered, LGBTQ, rural, urban, immigrant, Aboriginal, and local perspectives – without relying on the traditional silences or binaries upon which mainstream Australian history too often falls. (Review here) The second is a more recent publication: The Honest History Book, edited by David Stephens and Alison Broinwoski and containing chapters from a variety of notable current male and female Australian historians. It has been released for the centenary of ANZAC, but it ranges much further than this. In his review, Bernard Whimpress writes:

Organised in two parts, the first, ‘Putting Anzac in its place’ offers eight chapters arguing for the Anzac story to be reduced and thus given a proportionate place in Australian history, while the second, ‘Australian stories and silences’ proposes enlarging many other aspects of our history which are being neglected or sidelined – the environment, immigration, the economy, egalitarianism, a wider pool from which to draw heroes, women’s leadership, coming to terms with the concept of European invasion and settlement and its consequences for Indigenous inhabitants, the frontier wars, republicanism, and our role in wars as imperialist lackeys. (Review here)

Again, another month of varied and thought-provoking reading!