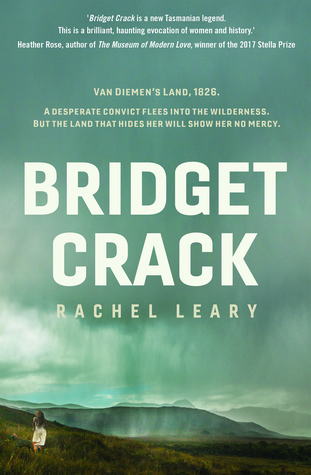 Today we welcome Rachel Leary to the Australian Women Writers Challenge blog. Rachel grew up in Tasmania then moved to Melbourne in 2003 having enrolled in the Diploma of Professional Writing and Editing at RMIT. Rachel has had a number of short stories and essays published and in 2014 she was awarded an ASA mentorship to develop her novel manuscript. At University of Tasmania Rachel gained First Class Honours for her Cultural Geography thesis on the Hobart Rivulet and then went on to train in physical theatre, clowning and improvisation. She has now been a professional performer for over ten years. While living in Tasmania Rachel spent much time camping, bushwalking, white water rafting and kayaking. (Bio courtesy of Allen and Unwin). Bridget Crack is her first novel. When Bridget Crack arrives in the colony, she is just grateful to be on dry land. But finding the life of an indentured domestic servant intolerable, she pushes back and is punished for her insubordination-sent from one place to another, each significantly worse than the last. Too late, she realises the place she has ended up is the worst of all: the ‘Interior,’ where the hard cases are sent-a brutally hard life with a cruel master, miles from civilisation.

She runs from there and finds herself imprisoned by the impenetrable Tasmanian wilderness. What she finds there-what finds her-is Matt Sheedy, a man on the run, who saves her from certain death. Her precarious existence among volatile and murderous bushrangers is a different kind of hell and, surrounded by roaring rivers and towering columns of rock, hunted by soldiers and at the mercy of killers, Bridget finds herself in an impossible situation. In the face of terrible darkness, what will she have to do to survive? When did you start writing and what was the catalyst?
I have been writing for as long as I remember. I would say my love of books was one catalyst.
What made you switch from writing shorter pieces to embarking on a novel?
I was actually writing short stories and working on the novel concurrently, but I had wanted to write a novel for some years and had tried a couple of times before I found something I wanted to persist with.
How far has your writing career evolved from when you first began to write to what it is today? Is this in line with your initial expectations?
When I first began to write it was because I loved to write—any career hopes or expectations I may have harboured didn’t really come to the fore until much later. I’d been told many times how hard it is to get published, so I probably deliberately tempered my expectations.
How long did it take you to write Bridget Crack? From inception through to completion.
That is hard to say as I worked on it in fits and starts until I received the mentorship from the Australian Society of Authors in 2014 when I worked on it in much more sustained way over a two year period. But I started tinkering with it about twelve years ago. A lot of my time in the early days was spent researching.
What was the inspiration behind Bridget Crack? Do you have any personal/family connections to the history covered in Bridget Crack?
Ned Kelly, probably. I grew up with that story and was attracted to the idea of the Irish underdog. But then I became more interested in women’s stories. I also found a letter from a convict relative of mine who was writing to the insane asylum to enquire about her husband. Reading her handwriting piqued my curiosity.
What is your favourite scene from Bridget Crack and why?
Hmm. A favourite? That is tough. Perhaps the one towards the end where Captain Marshall goes’West’ in his mind.
How much research did you do for Bridget Crack? How did you balance the demands of getting the facts right and telling a good story?
I researched almost as much as I wrote—so a lot. Yes, good question—it is fiction, so, I felt that I had to prioritise the characters motivations and the story over the actual timing of events, sometimes. But it was a bit of a balancing act.
The natural environment of the Tasmanian wilderness was pivotal to the story of Bridget Crack and the descriptions of it were quite vivid. Is this wilderness close to your heart, a place you know well and have spent a lot of time in?
Definitely. We camped a lot when I was a child. And as a young adult I was pretty into bushwalking and white water rafting. Discovering the wilderness was life changing for me. But even before that—we lived close to kunanyi/Mount Wellington and spent time in the bush.
Do you have any particular qualifications that relate to the subject matter covered in this novel?
I studied Environmental Studies and Geography. And yes, the history I read was filtered through my interest in place and landscape.
What do you like to do when you’re not writing?
I like going on adventures. Finding new places.
What authors and types of books do you love the most?
These days I tend to read as much for style and language as I do for plot and storyline, but not exclusively. I am a big Ian McEwan fan, Steinbeck, E Annie Proulx, Colm Tobin, Sonya Hartnett, Anne Tyler, Jaenette Winterson, Isabelle Allende, Coettze, Michael Ondattje, … they are some of my favourites.
Do you have an all-time favourite book? Why is this book so significant to you?
One all time favourite book?! I don’t think I could pick one all-time favourite book. To Kill a Mocking Bird, The Shipping News, All the Pretty Horses, Enduring Love, Eva Luna, The Chronicles of Narnia… At school I was really affected by I Walked Out One Midsummer Morning by Laurie Lee.
Can you tell us something about yourself that not many people would know?
When I was about seven I wrote a poem about Milo. I didn’t even know that—my older brother’s best friend just told me. Apparently, I read it to him.
If you could go back in time for a year, which historical era would you choose to live in and why?
Probably the early 1800s in England. I’ve had a lot of exposure to that period through the literature I grew up with: it left me wanting to have a go at being a lady and sipping tea while chit-chatting near a large window. But I’d say the experience, if I did get to have it, would be largely disappointing and even potentially hideous.
How has being Australian AND a woman impacted on your writing and/or writing career?
Hmm, well, I suppose Australia has a much smaller fiction market than say, the UK and the States, and as a woman there is still, generally speaking, the battle to have your voice taken as seriously as a man’s. But I am Australian and a woman so those things would impact my writing entirely, and in ways I don’t even know! I grew up feeling proud of being Australian—I absorbed a lot of national sentiment. I don’t have that as much anymore. In terms of being a woman—I started to feel the need for more women’s stories, written by women.

Thank you so much for joining us today Rachel and we wish you every success with the release of Bridget Crack.

Bridget Crack was released on the 1st of August and is published by Allen and Unwin.