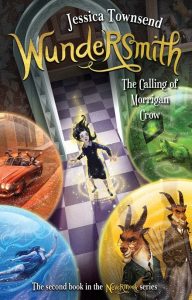 Welcome to the April Round Up of our young adult reads. We seem to be averaging nine to eleven reviews a month in this category, and from a stable of regular Young Adult readers – including myself, but it seems my April Young Adult reads are all likely to be featured in later months or weren’t Australian.

In total, we had nine individual reviewers this month, with a range of books being covered in areas such as diversity, fantasy, and crime, some of which had some crossover as well. There are a few favourites that seem to be popping up every month, such as the Morrigan Crow books by Jessica Townsend. This month, Cassandra Page and Carolyn Scott both reviewed the second book in the series, Wundersmith. Cassandra adored it, stating

“If you threw Harry Potter and Alice in Wonderland in a pot, added in some Wizard of Oz, and stirred vigorously, you might get something like the Nevermoor books. And, frankly, I think that’s all the recommendation you should need.”

As someone who has been with this series since I first got the press releases from Hachette, I must concur. It has everything a good series needs to engage readers young and old. It certainly has a charm about it that seems to have captured many imaginations, and whilst it might be compared to Harry, Alice or Narnia, it stands on  its own as a unique story – Jupiter and Morrigan, and Fen see to that!

For new releases, Sanch has reviewed What I Like About Me by Jenna Guillame . This is one I am eager to read, and so far, I have not been disappointed by what I have heard about it in terms of representation of all kinds, and the imperfect characters who, from all I’ve read, are realistic and closer to what many of us would have experienced as teens and what teens still experience over the popular culture images that we are fed all the time. I look forward to reading this for myself and enjoying it thoroughly. Another that stood out for me, was the review for What the Woods Kept by Amanda Barrett. Having also read this one, which I found terrifying, and at the same time, I could not put it down, though reading it at night certainly messed with my mind a bit – which I think this book wanted to do, I felt I should include another review about it. It has a touch of horror and psychological thriller about it – both genres that Mrs B and I do not naturally gravitate towards yet something about this one seemed to capture both of us in different ways. We both enjoyed it more than we thought, though for me it is one to be read with the lights on, doors locked and preferably in the daylight.

Finally, Jennifer Cameron-Smith reviewed one I have heard a lot about called You Must be Layla  by Yassmin Abdel-Magied, a novel that looks at the diversity of Australia and the different experiences people have based on what they look like or believe – I haven’t added this to my TBR yet – mainly because I have so much there already, and it grows each time more review or work books arrive. So maybe I’ll get to it soon.

There were many good reviews this month, and I chose to feature these ones because these books have many of the themes YA needs right now such as diversity.