Young Adult Round Up: September 2019 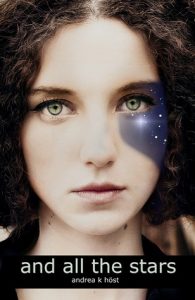 Hello, and welcome to the September Round up of Young Adult fiction written by Australian women. Only nine books were read this month – down on previous months but still fairly close to the average for the past eight months. Approximately half the reviews were on Goodreads, and half on blogs. Due to illness this month, I feel this may be briefer than my round ups usually are, so if I have left anyone out, I apologise – working through brain fog is not fun.

Most books reviewed are from a traditional publisher – either one of the major ones, or a small press. This month, Amy from Lost in a Good Book reviewed a self-published one by Andrea K Höst called And All The Stars. Amy says this is more than just a science fiction book, and its combination with intriguing characters makes it much more than what it appears to be when you look at the cover, and incorporates common and on trend themes without overdoing them. Another great review from Amy. Rebecca Bowyer reviewed a book called Eve of Eridu by Allanah Andrews which looks to be another within the fantasy or speculative fiction genre – which seems to be a theme this month in the reviews I have managed to read through for this round-up. Other themes that keep coming up this month are dystopia, and I’m wondering if that is just a coincidence, especially seeing as I am also including a review of Whisper by Lynette Noni, or if the three reviewers who have entered these reviews have had the same thoughts, and picked a trend for the month. In other months, things have been more mixed, so I wonder what is has been about September that has highlighted these dystopia novels. Rebecca says that this novel set following nuclear fall-out and biological warfare is good for the early range of young adult readers, as there is no graphic violence, and represents what the world could become, using the parallels of today’s society. The third young adult book I want to highlight that fits this dystopic, science fiction theme is Whisper by Lynette Noni. I read this after being asked to participate in a blog tour by the publisher, Pantera Press for the sequel, Weapon, which is now on my TBR pile, so I can get to it as soon as possible for the first week of November. This book cleverly marries the current world with a dystopic secret government facility, set beneath Sydney. It is not until part of the way through that we find out Lengard is in Sydney and where in Sydney, which is a thrill because having been there, I could picture those scenes, and imagine what Jane is seeing. In terms of its dystopia themes, it isn’t linked to the end of the world, but more related to a dystopic theme of what happens when the government experiments with medication and the results of this – and implications for generations affected by this. I’m hoping some of the questions I had at the end of Whisper are answered in Weapon – I am eager to read it and participate in this blog tour! Sorry this is so short, hopefully my next round-up will be longer.