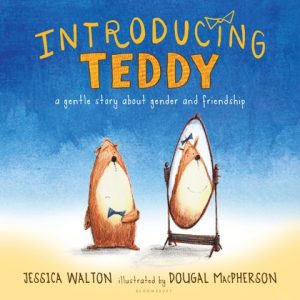 Happy holidays all! I hope this finds you in a cool spot with a book. If you need any more reading recommendations, the following roundup might help. As with the previous roundup, there were 80 reviews tagged with ‘diversity’ from September to December, so there are books aplenty to consult for your reading lists. It’s really good to see reviews featuring writers with disability. Amy from Goodreads reviewed Jess Walton’s Introducing Teddy: A Gentle Story about Gender and Friendship, about a boy teddy bear who knows she is a girl teddy bear. Amy describes it as ‘an easy to understand story for kids and with all the main moments covered by Walton’s story it is a great way to explore the topic.’

My hybrid memoir Hearing Maud, which entwines my experiences of deafness with those of Maud Praed, born more than one hundred years before me, was reviewed by Sue of Whispering Gums and Cass Moriarty. While it is always great to get coverage for one’s work, these reviews (to my relief) show that I succeeded in my main aim in writing this book – to educate hearing readers about the nuances and complexities of a disability that isn’t immediately obvious.

Also on the subject of deafness, reviewers thoroughly enjoyed Darkness for Light, the newest book in Emma Viskic’s crime series featuring deaf protagonist Caleb Zelic. Marianne of Goodreads warned readers about ‘an utterly hilarious exchange between Caleb and some rather stoned hearies that is best not read whilst eating, drinking or with a full bladder.’ Aside from the humour, she continues, ‘Viskic manages to include vandalism, money laundering, loan sharks, computer hackers, a windscreen wiper as a weapon, quite a bit of gunplay and a fairly high body-count in the lead-up to the nail-biting climax.’ Amanda of Mrs B’s Book Reviews, Shelleyrae of Book’d Out and Carolyn of Goodreads also thought the book was a corker.

Reviewers canvassed a number of books by Indigenous authors. Jessica from Underground Writers reviewed Claire G. Coleman’s Terra Nullius, describing it as ‘confronting, heart-wrenching, and utterly unputdownable. Coleman’s writing style pushes the reader ever onwards, denying you a moment to breathe as it propels you into the next piece of the puzzle.’ Melissa Lucashenko’s award-winning Too Much Lip was reviewed by Amanda from Mrs B’s Book Reviews (who describes it as a ‘confident and fearless novel’ and by Maureen Helen (who loved ‘the complexity of the characters, especially the women’).

While these books are classified as speculative fiction and fiction respectively, they can also be read as realist novels because their subject matter is grounded in fact. Other books by Indigenous authors reviewed in the past few months include Anita Heiss’s book of essays, Am I Black Enough for You (reviewed by Jennifer and Eleni of Goodreads) and Ambelin and Ezekiel Kwaymullina’s Catching Teller Crow, reviewed by Nancy.

Books by writers of diverse heritage were also prominent. Emily reviewed Maxine Beneba Clarke’s The Hate Race, a memoir which chronicles Beneba Clarke’s experiences of racism. She comments on the style of the work:

Maxine’s experience as a poet definitely comes through in this book – there is a certain poetry throughout the prose; Maxine frames her story as something of a West Indian song or story her grandparents might have told. It’s beautiful and striking, particularly in contrast to the content of some of the stories she is telling. Melanie Cheng’s second book, Room for a Stranger, the story of a young international student who moves in with an elderly lady, was reviewed by Jennifer and Cass on Goodreads. Jennifer comments on how the characters struggled ‘with the roles and expectations each had both of themselves and of each other,’ an observation mirrored by Cass: ‘Towards the end of the novel, both Andy and Meg face crises, albeit of very different natures, and discover that although they are almost strangers, they share that common bond, the need for acceptance and reassurance, the want of a hand to hold in difficult times, the offer of simple moments of friendship that are priceless.’

Amy of Lost in a Good Book penned her mixed thoughts on Yassmin Abdel-Magied’s YA novel You Must be Layla, while Emily reviewed Julie Koh’s short stories Portable Curiosities, which ‘examine being Asian in a white world, being female in a male world, diversity, capitalism and consumerism, social media influencers, and many other aspects of the modern world … in an absurdist, satirical way.’

Reviewers also listed a couple of interviews with writers – Nalini Hayes interviewed Suzy Zail, author of I am Change about a Ugandan girl who dreams of becoming a teacher. She also penned a review of the novel. Jessica from Underground Writers interviewed Elizabeth Kuiper, who emigrated from Zimbawbwe, and drew on her experiences to write Little Stones (reviewed by Sue of Whispering Gums). Tracey of Carpe Librum also interviewed Rebecca Bowyer, author of Maternal Instinct. Rebecca’s book, a dystopia in which women are required to have two children before they can move on with their lives, was enthusiastically covered by Veronica, Amy and Ashleigh.

Rebecca is joining the AWW team next year and will be taking over from me in the diversity role, and we look forward to having her on board. My final post will be the annual roundup in January. Until then, enjoy your summer of reading!