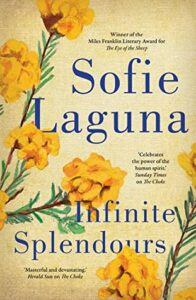 Before we know it, it will be Christmas and the end of another AWW Challenge year. It will be interesting to see whether this year’s end of year round-up is different in any ways to last year’s. Will the pandemic have wrought a major change in our reading practices? Time will tell. Meanwhile, we have November to write up, so here goes – with the usual award news at the end.

Our November count of 31 reviews is down somewhat on both last November (46) and last month (37), and I guess I know why. With Victoria’s COVID-19 restictions easing and borders opening, we are running amok – living not reading – and that’s OK! Enjoy, everyone! Meanwhile, here are some November highlights:

We had two classics reviewed again this month, which of course I love. If you want to be featured here, you know what to do. The two books were Angela Thirkell’s Trooper to the Southern Cross reviewed by Bill (The Australian Legend) and Thea Astley’s An item from the late news reviewed by Nancy Elin. Strangely, I also read these two books this year (though in earlier months.)

Angela Thirkell’s Trooper to the Southern Cross is a bit of a ring in, because Thirkell only lived in Australia for about ten years (after her marriage to an Australian solider) and all her published work was written after her return to England. However, Trooper is about Australia and Australians, and so it’s worth including here. Bill describes it as:

a fictionalised account of her post-war voyage to Australia, biting in its contempt of incompetent officers and sometimes laugh out loud funny …

Not only is it worth including here, it is also worth reading – as a summer read!

The same – that it’s a summer read – could not be said for Thea Astley’s biting An item from the late news, unless you, like me, read the same sorts of books over summer, at the beach, on holidays, as you read anytime! I enjoyed this book a lot, but Nancy, who is in fact a big fan of Astley’s did not like this one. Set in a small country town, telling the story of a man who wants to get away from the world to live in quietness and peace, this novel chronicles the brutality and narrow-mindedness that Astley so hated in small towns (though she also, it must be said, liked much about such towns too!) Nancy found it too predictable, the characters “bland, uninteresting, and unsympathetic”, and the overall theme “depressing” and without “a smidgen of joy”. But, she wouldn’t want this to put anyone off reading Astley!

When the Challenge was being established, much thought was put into the way contributors might categorise their reviews, and what use we might make of them – such as for these round-ups. We wanted to be able to identify books written by Indigenous Australian authors, so that we could promote these under-represented writers and track how well we were doing so. It was also thought that we might want to identify books not written by Indigenous Australians, but that dealt in some way with Indigenous issues. Hence the two “forms”, Indigenous authors and Indigenous issues. I’m not sure the latter is needed or whether our contributors use it rigorously, but it is there, so …

Of the 11 books tagged with one or both of these “forms” this month, six are by Indigenous Australian authors: Ali Cobby Eckermann’s Ruby Moonlight (reviewed by Nancy Elin); Claire G Coleman’s Terra nullius (reviewed by Georgia Rose); Melissa Lucashenko’s Too much lip (reviewed by Veronica Strachan); Nardi Simpson’s Song of the crocodile (reviewed by Kali Napier and Mrs B); and Karen Wyld’s Where the fruit falls (reviewed by Lauren).

All of these have been reviewed in previous months, except Wyld’s novel which was reviewed this month, but that website is currently under redevelopment so I can’t share the review with you. Nardi Simpson’s Song of the crocodile is, like Wyld’s, a recent release, so I’ll focus on it instead! Kali Napier makes a fascinating observation about it when she writes that it:

reinvents the narrative structure of the genre through the lens of First Nations people. The white family saga may follow generations, usually with the repetition of patterns, mothers and daughters, etc. — which this does. But white family sagas are mostly written in a linear, chronological arc. … However, Song of the Crocodile is the first novel I have read that tells a family saga in the way that I have often heard that time is experienced by First Nations Peoples in the Dreaming — the past is always present. When ancestors die in this novel, that is not the end of their arc. They continue to interact with their descendants from the other side in the sky.

This sounds like a great read that will introduce us to more than just the “issues” it discusses. Mrs B isn’t quite so specific in her description, but she certainly conveys the import of Simpson’s style:

Nardi Simpson weaves in the power of traditional music, folklore, stories, practices, culture and language within her novel. There is also a focus on the influence and weight of elders past, who help to guide the Billymil family through the changes they face. The influence of the ancestors is a strong and commanding force of this novel, directing the story to its final destination.

It is a book that makes you think about our history, our present and our future as a nation, issues of equality and the environment, though the latter might be a little more subtle than the representation of racism. It is also a song to the land, a special recognition of what land is, and how different people see it – and what it means to the Indigenous people of Australia.

It’s really quite amazing how the awards keep coming right up to the end of the year.

The shortlisted books by women are:

McKay’s and Pham’s books have been reviewed for the challenge, though not in November. We are still waiting for a review of Gail Jones’ book.

This award used to be called MUBA, or the Most Underrated Book Award. I guess we know why they have changed its name! Still, I always rather liked the cheekiness of the name. The shortlisted books by women are:

All but Mandy Ord’s and Cham Zhi Yi’s books have been reviewed for the challenge. Charmaine Papertalk Green’s poetry collection was reviewed in November by Nancy Elin (but this comes under the Poetry round-up.)

Lucy Treloar’s Wolfe Island won this award, but while it has been reviewed several times for the Challenge, it wasn’t reviewed this month.

Voss Literary Prize Shortlist (3 of 6 by women) and Winner

The shortlisted novels by women are:

All of these have been reviewed for the challenge – including the winner, Tara June Winch’s The yield – but none in November.