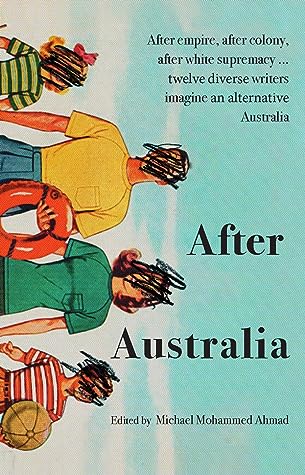 Once again this year seems to be flying, where did February go? I hope you all got a lot of reading in, I read a fair few books this month, most of them really enjoyable. For the Speculative Fiction category, we had 14 books read which is a good month, the majority of which are new on my radar.

Reviewed by Cass Moriarty, we have an anthology “In After Australia, edited by Michael Mohammed Ahmad, 12 diverse writers of both Indigenous and POC backgrounds, imagine Australia at some time in the future, ‘after empire, after colony, after white supremacy…’. The result is a richly imagined collection that is sometimes humorous, sometimes poignant, and often terrifying.” she also says ” This is a diverse work of speculative fiction that explores many questions and challenges the reader to begin searching for answers.”

Sargasso by Kathy George was reviewed by 3 people, I have also read this, but for me, it didn’t live up to my expectations. For the majority though, this was a compelling read.

Helen says “Where do I start, what can I say? This is a compelling read, the author has pulled me into this story, had me wondering and guessing as I turned the pages and when I put it down it was on my mind.” and”This is such a mystifying story for me, I didn’t know what was real at times and what was not, it was gripping and captivating and dark, I do know that it is a story that will stay with me for a long time to come, a story filled with secrets, tragedy and a deep, deep love that became obsessive and caused pain for some people, an emotional story. I was feeling lots of different emotions while reading this one Kathy George certainly wrote a story that I do highly recommend, the story is still churning around in my mind.”

Shellyrae @Book’d Out says “George develops an extraordinary atmosphere that blurs the line between what may be real and what may be imagined. The initial impression of Sargasso is one of light and strength, but slowly, particularly in the present timeline, the atmosphere of the house becomes oppressive and sinister. Rather than protect Hannah, it seems to trap her in a space between waking and sleeping.”

Mrs B’s Book Reviews loved it and says “With a strong sense of foreboding, plenty of conjecture, standout characters, a site that takes on a life of its own, a dangerous backdrop and a past mystery to unlock, Sargasso has it all down pat. It took only a small amount of time for me to settle into the gentle waves of this novel and I was committed for the duration. I found myself in quite a quandary while reading Sargasso. I found that I was both turning the pages in anticipation to get to the heart of the mystery, but also savouring this truly magnificent novel for as long as I could. It was a blessing to be able to remove myself from reality while I was attached to this book, it certainly was a very special read.”

Stealing Time by Rebecca Bowyer, a novel that is due out at the end of March, and one that is next up on my review pile, was reviewed by Carolyn who said “Bowyer’s brave new world is a disturbing one where anyone over 65 is seen as a drain on society rather than an important resource.” and “For me, the climax of this book seemed a bit rushed and could have unfolded more slowly to better explain what was happening. Aside from that, I very enjoyed this work of speculative fiction and the issues it raised.” and Cloggie Downunder who says “The premise of this speculative fiction tale is quite fascinating, and Bowyer’s world-building is fairly subtle. When Varya explains the government’s rationale for implementing Rest Time chips, it demonstrates a society that no longer values the elderly, sees them only as a burden and not as a resource, and one that values productivity over family.
The plot is gripping and keeps the pages turning towards the dramatic climax. The complete situation with Varya’s family is only gradually revealed, and every time the reader believes they know the entire scenario, another wrinkle is added to complicate it further.  This is an interesting and thought-provoking read.”

Ashleigh @The Book Muse reviewed The World Between Blinks by Amie Kaufman and Ryan Graudin a middle-grade novel and says “This is an engaging story that mixes reality, history and fantastical lands, with a touch of mythology to drive the plot and characters forward. It is one of those novels that is engrossing yet you also want to make it last so you can piece every bit of the mystery together carefully. That said, there are still a lot of curveballs and surprises, so it works to fulfil many desires and needs in a book like this. The first in what looks to be an intriguing and fun new series, The World Between Blinks is fun, educational and inclusive, great for fans of fantasy and reluctant readers.”

Denise Newton Writes says “First of all, this is such a cool title reflecting an equally cool premise: that there is another world that exists in parallel with our own, that some people (especially youngsters) can occasionally get a fleeting glimpse or sense of it – in between blinks. The book lives up to its promise of terrific world-building by the authors, some adventure, a treasure map and lots of magic, and engaging characters, especially the two protagonists, cousins Jake and Marisol, who arrive in the world by accident and must find the one person who can help them return home. The World Between Blinks is a wonderful beginning to a new middle-grade fantasy series. It will be enjoyed by readers who like adventure, magic, and a little history, all rolled into a satisfying package.

The Ghost Squad by Sophie Masson was one that I really enjoyed Claire’s Reads and Reviews “The Ghost Squad was a really novel idea, one I found very interesting. What if you had the opportunity to find out what was really on the other side when you die? This book was full of twists and turns, conspiracies, relationships, secrets, danger and action. I really couldn’t foretell anything that was going to happen and it wasn’t always clear who to trust or who to believe. There were plenty of people and factions to be wary of along the way and there were some unexpected allies too. I recommend this if you are looking for something engaging and different. I feel there should be a sequel because I think there is so much more to uncover and fight for, but I’ve been told there is nothing planned at this point. It does end in a way that is satisfactory, I just want more.” NB I’ve since heard from the author that she is planning a sequel at this very moment, so I’m very happy about that.

Ashleigh @The Book Muse says “It is a gripping novel that has the history of the world and key pieces of information peppered throughout to help the reader understand the world and what Polly and Swan are going to be facing. Filled with secrecy and cover-ups, and with characters who have varying degrees of trustworthiness throughout the novel, to the point where you don’t know who you can trust other than Polly, Kel and Swan. These relatable characters who are human and flawed drive the narrative, and invite us into their world. It is up to Polly and Swan to find out how to prevent the clandestine factions from controlling people more than they should, and how they go about it and returning to their lives as best they can is told with great gusto and flair, as their world starts to change forever. A great young adult read for teens aged 14 and over.”

Feral Fate by Kendall Talbot was reviewed by Brenda who says “Feral Fate is the 2nd in the Waves of Fate trilogy by Aussie author Kendall Talbot and once again I needed to strap myself down for the ride, suspend my disbelief and fly through the pages. After I finished this episode, I was trying to think of who the most likeable character is – I’m pretty sure it’s Gladys. This is one trilogy which MUST be read in order. Reading out of order will take away the enjoyment, and you will have no idea who the characters are, or what happened to get them in the place they’re in. Recommended.” I am also reading this series and thoroughly enjoying it.

So, I think we had some great new books linked this month, to take a look at all the books reviewed in February go here. Keep linking those reviews here and I look forward to catching up again next month. Until then, happy reading.