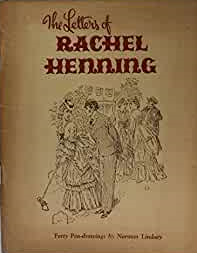 On Wednesday Bill Holloway posted a review of The Letters of Rachel Henning edited by David Adams, a work originally serialised in the Bulletin in 1951-52. Bill points out that Adams cut Henning’s original letters to create “a continuous, readable, and some say novel-like narrative”. While it would have been preferable to find a facsimile copy of Henning’s epistles, today’s reprint of an extract from one of the letters is from the Bulletin’s 1959 reprint. No doubt it displays Adams’ savage editing, but it does make for an interesting read.

When I last wrote we had begun shearing, but were sorely hindered by the wet; that all passed off in a week, though, and since we have had it tremendously hot, real tropical summer weather. The thermometer stood at one hundred yesterday in the shady veranda, and for days it has been ninety-five of an afternoon in the parlor.

The wonderful thing is that people go on with their work just as usual. The shearers shear, and Biddulph and Mr. Julian roll-up and tie their fleeces, and Mr. Taylor and his gang (about eight men) stand in the river and scrub the sheep all day. I think they have rather the best of it.

Shearing must be awful work stooping over the sheep the whole of these burning days, and yet several of our shearers shear one hundred sheep a day, and one man who is a “cracker” shearer can shear a hundred and fifty, working long hours. They get well paid, 4s. 9d. a score of sheep, but it is very hard work. Biddulph says he tried it when he was at Gin-Gin learning sheep-farming, and lumbago was nothing to the backache it gave him.

Everybody will be glad when the shearing is over. It is one perpetual drive of work, shepherds coming and going, flocks “camped” about in every direction (for they have not yards enough for half of them), and then they have to wait till all the sheep lie down, light several fires round the flocks and then camp by the fires to look after the sheep, and drive them in, if they begin to go away to feed in the night.

Biddulph and Mr. Taylor are generally camped out somewhere, for the shepherds are not to be trusted at night, and Mr. Hedgeland often goes out also. Mr. Hedgeland came back on the 13th, having been away two months. I do not know how long he will stay, but I suppose till we go to Sydney. We expect to leave Exmoor about the end of January, and have already packed up and sent away some boxes to Sydney, as they had to go with the wool-drays. I cannot say there was a great deal in them, as we have not much clothes to spare just at present. It is coming back that they will be full.

What we shall want for the voyage down, and for our stay in Port Denison, we shall have to take with us on pack-horses. Biddulph will want a change after all the bother and hard work of shearing, and Annie wants to go down, but for my own sake I think it is going through a great deal of trouble to arrive at very little. As the boy said when he had learned the alphabet.

Except Amy, there is nobody I care to see in N. S. Wales, and this easy out-of-door life with the shady house and veranda in the heat of the day and the beautiful evenings to walk in is far pleasanter than the dull streets of Sydney, dusty or muddy, as the case may be; besides, I feel morally convinced that some misfortune will befall my pet lambs while I am away, or they will be neglected. However, it is no use to grumble, and we hope to be back here again in three months, when the hot weather is over, and the beautiful winter has begun.

Sometimes I think perhaps we shall never come back to remain. Biddulph may at last find him a wife in Sydney; for his own sake I should be very glad, for I think he would be happier, and his is quite old enough to know his own mind, and well off enough to marry. Well, if he does there is a pleasant side to it even as far as I am concerned, for though I should be sorry to leave Exmoor I should see England again, and you and the children! Annie would mind more, but I suppose she would stay with Amy till married herself.

I do not know what tempted me to give you this dose of speculation on possibilities, but, of course, one often thinks of the changes and chances that may come, and Annie and I sometimes talk of them.

Since I last wrote the drays have come in again and started once more with their second load of wool. Biddulph has nearly always two drays on the road going down with wool or bringing up supplies. The bullock-drivers are almost the best-paid men on the place. They get 40s. week, as much a year as some clerks and curates have to live on at home. It requires a great deal of skill and practice, though, to make twelve or fourteen bullocks all pull together.

Biddulph had two very good drivers in his employ, but one of them died on the last trip up very suddenly. His dray had capsized in a creek, and, as a storm was threatening which would have spoilt all the cargo, he and the other driver and some men who were travelling up the road with them worked very hard at reloading it. It was a very hot day, and Miller, who was a very excitable man, overexerted himself, they supposed. Whether it was that or a sunstroke or heart complaint nobody seems to know, but he sat down to drink some water and died in a few minutes.