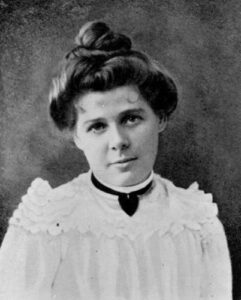 As we posted in our recent Ethel Turner juvenilia post, Ethel Turner, author of Seven Little Australians, and her older sister Lillian practised their literary skills by producing a newspaper while still at school. In that post, we also mentioned that Louise Mack, a writer and war-correspondent, was a classmate of Ethel’s. She claims that she and a group of her friends produced the school’s first newspaper, which idea was copied by upper school girls, presumably including Lillian.

The NSW government established high schools – Sydney, Goulburn, Bathurst and Maitland – with separate schools for boys and girls, in 1883. Louise Mack and Ethel Turner were then 13 and Lillian Turner 16. It is likely they were among the first to enrol for Sydney Girls High. Louise Mack wrote about her first two years at school in what would now be called Young Adult novels, Teens andGirls Together. She gives herself the name Lenny Leighton, but the Turners do not appear under their own names, and I can’t pick them out.

[Here’s the school, which was in Elizabeth St, on the corner of Market St, the site now occupied by David Jones:]

A large, brown, two-storey building, with a wide, wooden staircase, a verandah all round, and an asphalted playground, shaded with two huge Moreton Bay fig trees. This was the School.

[The paper had its genesis in an informal meeting of friends under one of those trees:]

“Why don’t you have a little paper, a little tiny one, every week?” said Mimi. It was Mimi, pretty golden-headed Mimi, who made this suggestion. But she never got the credit of it, for Mabel seized on it suddenly, and cried: “A little paper for school. Come out—every month. And all the girls would read it. Oh, Len-nie!” And the others thought the idea had come from tall, quick Mabel.

Oh, the talk that went on under the fig-trees! They would have a paper— a little, dear little paper. It would come out every month, and they would all write for it.
“Oh, I can’t,” cried poor Mimi.
“Yes you can,” cried Mabel. “You must.”
“I think I could write an essay,” said Caroline.

Out came paper and lead-pencil, and Mabel began to make lists. “Caroline—an essay; Lennie—a story; Me—a poem; Mimi—(a pause, while Mimi gave a little frightened squeal)—well, Mimi—a letter to the editor, all papers have that.”
“But who’s the editor?” interrupted Caroline.
“Lennie,” said Mabel.
“Mabel,” said Lennie.
“Lennie and Mabel,” said all the others…

All in one day, it was decided that the paper should come out; should be called The Chronicle; should be handwritten, and should be, oh, so very, very good.

Next day, more planning took place. Mabel’s lead-pencil scrawled fresh lists, Lennie talked so quickly that her throat began to be husky. Mimi refused to be serious, and made little frivolous remarks, and laughed a great deal, but was warned by Mabel that she must do her share of the paper, and that she had better behave, or they would make her write an editorial.

The size of the paper had to be decided. Caroline thought it should be as big as a tract. Ella had no views at all. Mimi only knew that it ought to be a “tiny little thing.” Lennie was for making it the size of a sheet of writingpaper. They decided on that.

When the day for the meeting came—although indeed there had been meetings every day in the meantime—the following members had their work ready:—Caroline, Mabel, Lennie, and, to everyone’s surprise, Mimi. Caroline had written two chapters of a long story, Llandilla: a Tale of the Druids. There would be about two hundred chapters when it was finished, Caroline stated, and The Chronicle would be able to depend on that for years. Mabel had her Schoolgirl’s Dream, and the first chapter of another long story, Kathleen Carewe. This was going to be a lovely thing, she explained, vaguely. Lennie had brought her Swiss Legend (which was not hers at all, but an old fairy-tale teller’s, in his grave for years), a long poem, The Churchyard on the Hill, and the opening chapters of a third serial story. But Mimi outshone everyone. She had brought three “Letters to the Editor.” One urged the need of a school library, one called attention to the way the girls dawdled in the playground after the school-bell had rung, and one suggested that the matriculation class should be formed three months earlier than the custom was.

These were really very strange subjects for Mimi to write about. Everyone looked surprised; but Mimi smiled, and handed round chocolate sticks.

Next day, Mabel brought a box of note-paper, and distributed it among The Chronicle Staff, giving ten sheets to each one. Then the contributions were arranged in order, and Caroline was asked to make the first copy of the paper, and promised to do it immediately. This took longer than she had thought, though, and it was a week before she had finished.

But when, a week later, she took it out of her basket, and laid it on Lennie’s lap, and all the heads bent down over it, and the words,
THE CHRONICLE,
stood across the front page in bold red and blue lettering, and the date in gold italics, and various curves and elegant lines in pink and gold, and their own names in dark sepia, they were beside themselves with pride. Each one clamoured for the task of making the second copy. Mabel won. Hers was even a more beautiful affair than Caroline’s, for she had drawn angels’ faces and tiny landscapes in the corners.

Caroline took a week for her copy. Mabel did it in one day. But nobody knew how far into the night her gas was burning. Then it was Lennie’s turn; then Ella’s; and finally, Mimi’s. And then all the copies were ready—the five of them. Each was written in a large, clear, round-hand, on one side of the paper. The backs were bound with slips of blue ribbon. The title was printed in big letters on the back, and the names of the contributors were written below.

On Monday The Chronicle was launched on the sea of school-life. The five copies were distributed among five classes before school in the morning.

“Pass it on as soon as you’ve read it,” was the order given away with each paper.

When half-past twelve struck that day, and the girls came pouring down the staircase, it was evident that something exciting was happening. Little groups of girls clustered together about the playground, gathered round Mabel and Lennie, mobbed Mimi and Ella and Caroline, and rained down showers of inquisitive, eager questions, exclamations of wonder, cries of delight, shrieks of laughter, more questions, and still more questions. Who had thought of it? How had they done it? Who had written it for them? Why had they done it? Could anybody write for it? Was there going to be another? Were there no more copies?

For the five copies of the little blue-ribboned thing were all too few for the three hundred readers who were clamouring with each other for “next read.” Everyone wanted it at once, and everywhere there were girls tiptoeing to see over the shoulder of someone, who, in her turn, was peering over another girl’s shoulder at a copy of The Chronicle

[Miss Hammerton, the principal, gives the girls half a sovereign so that they may have the next edition, printed, But at the beginning of the next term, when they go to Mr. Poppleton, the printer,  he tells them …]

“Well, if you didn’t have a cover, and if you only had four pages, I could do it for two pounds a hundred.”
“But we don’t want a hundred.”
“That doesn’t make much difference to the price, Miss,” he said. “Besides, you might be able to sell them.”
“But two pounds! We would have to make thirty shillings! Sell sixty copies! And supposing we couldn’t do it?”
“I think we could,” said Lennie, in a low voice. “I think we’d better, Mab.”

When the paper was ready, these three girls took it to Mr. Poppleton, and begged him to make it look as nice as he possibly could. There was then nothing to do but to wait till it came out, and to spread the news abroad among the schoolgirls that the next number of The Chronicle would be out in a fortnight, would be sold for sixpence, and would make its appearance in print.

It must be understood that A was the highest class in the school; B was only second.

And all this time the girls in A, who considered themselves much superior intellectually to the girls in B, had allowed some girls from the lower class to manage what might become a great institution some day— the school paper.

True, the girls in B had thought of it, and the girls in A had not. But some of the A girls had lately felt sure that they would have thought of it, if those B girls had not been before them with the idea. And when they heard that the second number of the paper was to be printed in black and white, just like a book, they felt that it was time for them to bring themselves forward, for the sake of their dignity.

There was a girl in A who had just been up for the Junior, and passed well. Her name was Leah Cohen, and she was the eldest girl in a Jewish family. She was very bright and quick, had a wonderful memory, and was said by the teachers to be the best “all-round” girl the school had ever known.

She made up her mind that she would start a rival paper, and would have the cleverest girls in A to help her, and would show Mabel and Lennie how a paper ought to be done.

They knew nothing about this till one day, a week before The Chronicle came out, Leah took hold of Lennie’s arm as they were coming down the stairs at mid-day…

“I don’t want to do the thing in an underhand way,” said she, “so I thought I would tell you about it to-day. We girls in A have started a paper. We began to write it at the beginning of the quarter, and it is already now, and comes out next week.”

[The A girls’paper which is professionally printed, with advertisements (by one of the girls’ father) of course completely overshadows the second Chronicle and our girls are left despondent and with a substantial debt. However, all ends well.].

Teens and Girls Together (reviews here & here) are fun, light reading of course – teenagers were incredibly young back then – and have some excellent descriptions of life in inner, middle class Sydney in the 1880s. Teens can be downloaded free here.