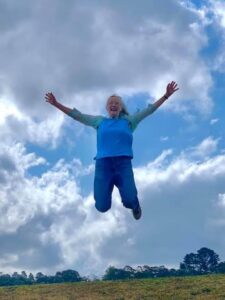 One way I’ve been tracing Australian women writers is by looking at “literary notes”, gossip columns and review pages on Trove; another has been to look at indexes of anthologies. When I check the names I find against the AustLit database, quite often there are comprehensive biographies and lists of “works by”; sometimes, however, the biographical details are scant, and the listed works are few.

Take the case of Isabel Grant.

Grant has six stories listed in the AustLit database, but no birth, marriage or death dates, and no known pseudonyms. There’s also an intriguing gap of a decade between the publication date of the first three of her stories and the rest.

So who was Isabel Grant, and why don’t we know anything about her?

Grant’s entry on the Colonial Popular Fiction Digital Archive, my initial source for many of the entries in the archive, provides no clue. It lists only one of her stories, “A Daughter of Her Country”, anthologised in The Red Kangaroo (1907).

Another trip down the Trove rabbit hole is called for.

An early instance of the name “Isabel Grant” appears in the results for a Sydney Mail story competition in 1904 which mentions “Isabel M’Donald Grant, of Coriemong [sic], The Range, Rockhampton”. This looks promising. The entrant adopted the pen-name of “M’Donald Grant”, and her novella, “The Furnace for Gold”, is described as “a Queensland Mining tale, of considerable strength, showing skill of construction”. The same paragraph states that the author “has also completed the M.S. of another book which has been favourably reported on by English authorities to whom it was recently submitted. It has not yet been published.”

A search for “by M’Donald Grant” (and “McDonald” and “MacDonald”) proves fruitless; but one for “The Furnace of Gold” turns up treasure: the novella, published under the author’s own name, was serialised in The Sydney Morning Herald in 1906. Another item to add to Grant’s list of “works by”.

A different search, for “by Isabel Grant”, uncovers more dross than gold: a story, “A Stolen Game” (1904), has very patchy print; and there is an unreadable poem, “The Two Tides”. Sifting through a promotion for The Sydney Mail Annual in 1906, a few glints come to light: its list of authors include a “Miss Muskett, Marion Steventon, Louisa Lawson, M Forrest, May Kendal” and a “beautiful little story by Isabel Grant” concerning a loyal young American transplanted to Australia”. Is the story autobiographical and Grant was an emigrant from America? I wonder. Is that why I can’t find an entry for Grant’s birth in the usual archival records? The story, I realise, is “A Daughter of Her Country”, already published in the Sydney Mail and the one that appears in Red Kangaroo – already listed on AustLit.

Not the most propitious start.

In the 1920s, I see that Grant was a regular contributor to The Queenslander, writing a column called “Talks for the Home Circle”, as well as an occasional article. The topics are wide-ranging, including on the subconscious mind, nerves, growing trees, heritage, friendship, sleep, imagination, children, auto-suggestion, and many more.

Isobel Grant: novelist, some-time poet, short story writer, children’s author and later columnist; a working writer over several decades. Yet still no records of her life have come to light. I read back over that original notice in the Sydney Mail. Grant was from Rockhampton, a regional author: her columns, and most of her stories, I see, were published in The Queenslander. Does that explain it? Was she well known in her local community and nowhere else?

Thanks to the gossipy local regional newspapers of the time, a further exploration does unearth some details about her life. With a few side trips to Queensland historical records, the search reveals more than a few gems.

This is what I have discovered so far.

Isabella Grant was born in Scotland, circa 1870. Her parents, Jessie Margaret MacDonald and William Grant, were both natives of Glen Urquhart, in the shire of Inverness. William Grant had come out to Australia in 1850, but returned to Scotland a few years later to marry and bring his new bride with him to Australia. They lived here until 1867 when they returned to Scotland, where, presumably, Isabella and her five siblings were born. The couple brought their young family to Australia in 1882 and settled in Rockhampton in 1884. That same year, Isabella’s father William died.

Isabella, as she was then known, was a gifted student, a writer of prize-winning essays, and a confident public speaker, chosen to greet both the Governor and a “Lady Musgrave” when they visited her school. Later Isabella became an assistant teacher and rose through the ranks, firstly at the Central State School for Girls at Rockhampton, and later as Head Teacher of the Maryborough Central Infants’ School.

In early 1909, Isabella – now “Isabel” – travelled to Sydney and the nearby Blue Mountains, returning to Rockhampton to retire from teaching and marry Jonathan (“Jack”) Murray. In one wedding notice she is described as being “an authoress of repute”.

Little has been found about her husband Jack Murray, except that he most likely ran a family grocery business. A notice in the Maryborough Chronicle announcing a “Monster Cash Sale” at the retirement of “Mrs Jonathan Murray Senior” was put in by “Jonathan Murray & Son”, but the business name is no doubt a legacy title: Jonathan Murray senior had died years before his son’s wedding.

By this time, Isabel’s siblings all had risen to positions of responsibility, both within the local community and further afield. Her eldest brother, J D Grant, was an officer of the Mount Morgan Gold-mining Company; her second brother, Kenneth Grant, was a member of the Legislative Assembly; a third brother, Hugh Grant, was a solicitor in Rockhampton; and her sister Elizabeth Grant took over Isabel’s duties as Head Mistress. That’s not to say the family wouldn’t still have identified as working class: Kenneth Grant had been elected to the Labour Party, having first worked as a telegraphist (a new technology, for the time), as well as for the Rugby Union Football club.

In 1910, Isabel gave birth to a daughter, Hazel Jessie Margaret Murray, named after Isabel’s mother who had died in 1905, as well as Isabel’s younger sister Jessie, who had been a companion to their mother. In the years following, Jack and Isabel, with the daughter Hazel, regularly visited Jack’s widowed mother at Point Vernon, Pialba. When the First World War hit, Isabel became involved in the war effort, joining the committee of the “Sock Society”, and her contribution of “three parcels magazines, novels and general literature, and 1 pair socks” hints at what she considered were among the soldiers’ primary needs.

Over many years, Isabel helped at the Presbyterian Sunday School and was fundraiser for the Lady Musgrave Hospital, named after it seems the same Lady Musgrave she had once been appointed to welcome to her school in the 1880s. In 1939, the year their daughter Hazel married, Isabel and her husband left Rockhampton for Brisbane, after a lifetime serving their community. The “Farewell Evening” described in the Maryborough Chronicle gives a sense of the esteem the couple was held in. Jack Murray died in 1943; Isabel survived him by nine years, dying in Bundaberg, near where her daughter lived, in 1953.

A couple of private, family notices mark her death on 1 April 1952; no mention is made of Isabel’s writing; The Queenslander, the newspaper to which she had contributed for so many years, had ceased publishing in 1939. It is left to us to make good use of the resources on Trove, to read her work and decide whether her work is worth rediscovering; whether indeed she ever deserved the title, “authoress of repute”.

If the first of her stories I’ve found, “Michael the Archangel”, is anything to go by, the rest of her work is worth exploring. This story will be published as our “stories from the archive” selection on Friday.

Elizabeth Lhuede published poems and short fiction in the 1990s while working at Macquarie University as a tutor and research assistant. She took a break after completing her PhD, and returned to Macquarie later to teach English and Creative Writing. More recently, Elizabeth instigated the Australian Women’s Writers Challenge and, under the pen-name Lizzy Chandler, has had two e-novellas published with Harper Collin’s Escape imprint (romance and romantic suspense), one of which has been anthologised in print.