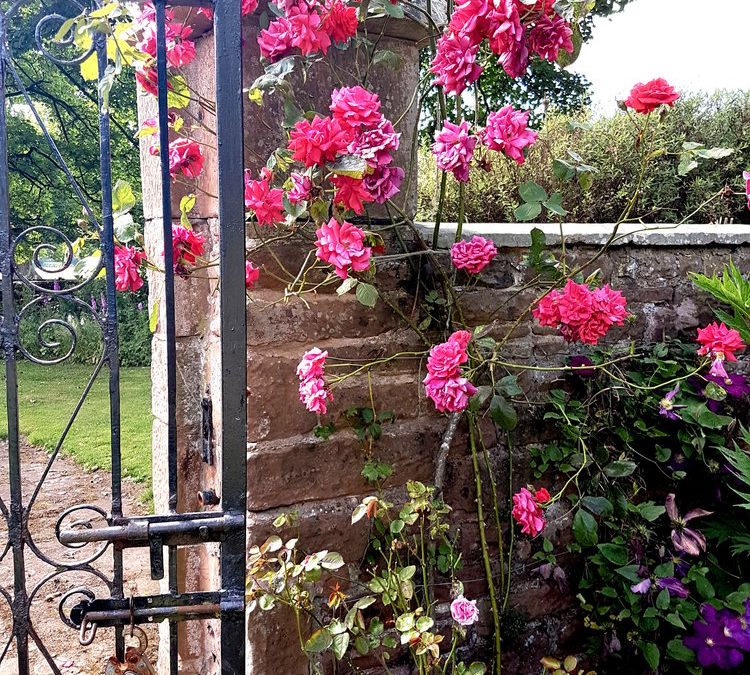 Jessica White is a writer and academic whose short stories, essays and poems have appeared widely in Australian and international literary journals. Amongst her work in progress is an ecobiography of 19th century Western Australian botanist Georgiana Molloy.
This essay was first posted in JessicaWhite.com and in The Australian Legend in Jan. 2018.

Georgiana was born into a life of wealth in 1805 in Carlisle, England. Her father, an ambitious Scotsman named David Kennedy, married Elizabeth Dalton, daughter of the Mayor of Carlisle. Kennedy built a house on his wife’s land (which was now his) at Crosby-on Eden, a few kilometres east of Carlisle. Georgiana, as a girl training to become a lady of leisure, learned her first lessons about plants in its gardens. Like other decorative arts such as writing, painting and flower arranging, botany was seen to be a worthwhile pursuit for women as it combined leisure and learning. It encouraged women to go outdoors, learn botanical Latin and read handbooks about Linnaean systematics. 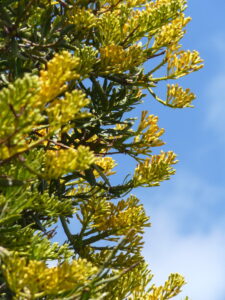 Georgiana’s father fell from his horse and died in 1819, leaving behind debts, five children and a widow with no means of supporting them. Georgiana was fourteen. As she grew older, her family situation became even more unstable, as there was conflict with her mother and sister. One of Georgiana’s motivations for marrying Captain John Molloy and emigrating with him to Western Australia in 1829 was that her options were narrowing.

The Molloys were among the first Europeans to live at Augusta (roughly 300km south of Perth). Not long after her arrival, Georgiana gave birth to her first child in a tent, but the baby only survived twelve days. In Georgiana’s archives is an undated and unaddressed account which catalogues her baby’s decline towards death. I have always thought this was an attempt to make sense of the event. She wrote to her mother and her friend Frances Birkett about her child’s death, but this account must also have been sent to her family or friends, otherwise it would not have made it into her archives.

Georgiana’s grief could easily have turned her against her environment, but instead she and her husband responded with a tentative acceptance of it. Sometime after her daughter’s burial, Georgiana wrote in her undated account, ‘Dear Molloy went unknown to me and sowed Rye Grass and Clover over [the grave] and has recently put some twigs across it to form a sort of trellice work with the surrounding creepers which in this country are very numerous.’ The mingling of English and Australian plants seems symbolic. Later, Georgiana wrote that in her garden she had ‘frequently endeavoured to introduce the native Plants among the exotics, they do not succeed from want of their Native shelter’.

Georgiana had another five daughters and a son. In December 1836, she received a box of seeds from James Mangles in England, cousin to Ellen Stirling, wife of the governor of Perth. With the box was a letter requesting the exchange of the English seeds for ‘the native seeds of Augusta’. Georgiana didn’t have time to collect for Mangles on account of what she called ‘domestic drudgery’, but in November 1837 her son, then nineteen months old, fell into a well and drowned. Following this, Georgiana had a ‘dangerous illness’ (which I interpret as a breakdown), and when she recovered she went into the bush to collect seeds for Mangles, and to take her mind from her grief.

Georgiana’s extraordinary and poetic life has been chronicled in a number of biographies, most recently with great detail by Bernice Barry in The Mind that Shines. However little attention has been paid to Georgiana’s skill as a writer. The letters that she penned to her family are quite different to those that she wrote to Mangles. This is largely on account of audience, for writers always adapt to whomever they are writing for. To her mother and friends Georgiana chronicled the hardship of her life at Augusta and the heartbreak over her loss of her children. The letters to Mangles, however, sparkle and shine with wit, humour and poetry, particularly when it comes to writing about plants. Mangles gave Georgiana the opportunity to write with creativity and imagination, and the letters she wrote to him were extremely long. Below is an excerpt from a letter of 1840, so long that Mangles only made extracts from it. The Molloys had by this time relocated from Augusta to the Vasse (now Busselton) because the country there was better for farming:

To day I have been employed in your service after breakfast the Children and I went in search of Flowers; — It has been a beautiful day & I have not been so long a walk for many months.  I found two sorts of lovely Kennedia Nos 50, 311 the first I had never seen before in flower altho’ I sent you a green specimen and the seed by the Box which certainly must have arrived in the beginning of July I have received so much from you I am quite ashamed to think of it, and the little leisure I have, or rather opportunities I take to endeavor [sic] to collect are so circumscribed I am quite mortified I cannot do more to contribute to your laudable pursuits.

I was out riding a few days back & the country was assuming its usual garb Hibbertias & Hoveas thickly covered the ground I dried two or three Specimens but not being able to gather them myself I did not get all I wanted, However rely on it I will do my best — I have dried some beautiful specimens of Kennedia but by the time you receive them their brilliancy of colour will be fled — I never ride out that it is not on your account the other day when in search for Nuytsia I had most delightful success — We went a very nice ride in a south easterly direction following a small tributary stream to the Vasse, the banks were thickly studded with Banksia, Acaccia [sic] & the Shea – oak, the ground was adorned with the crimson flower of Kennedia, but not so profusely as it will be, a week or two hence — all at once after going through an interminable grove of Jacksonia we came on to an open plain of many acres in extent scarcily [sic] a tree on it and those that grew were large & fine — I discovered a plant I have been almost panting for, a very small neat white blossom, on a furze looking Bush, I do not know the Number, it is in the last collection, & Mr Preiss could not tell the name, it being peculiar to this Vasse Country We found a large quantity of it — a little further on another enigma was solved the beautiful White blossomed tree, the flowers I sent in my last I found to be the identical Tree. which bears those wooden Pears or Nuts, the first was hanging on the tree, but was too high for us to reach I was quite happy to make such a discovery as the shades of night were commencing we reluctantly turned homewards, when other agreemens met my inquiring eye — What? but a grove of “Nuytsia Floribunda” I thought myself really blest that these desiderata should place themselves before me, & going up to [the] trees I unhappily found I was too late, I should but for my long illness have had the seed, it was too dark to detect seedlings, but these I will repair for — you will think I am romancing when I tell you that out of this Nuytsia swamp we came on one as thickly & universally covered with Kingia if I understand rightly what Kingia is — the grass plant with many short heads branching out whereas the “Xanthorea hastile”, are very tall and upright, these 4 things have occupied my mind many a long day — I was quite exhiliated [sic] I had found these treasures so unexpectedly before this, I was working blindfold. 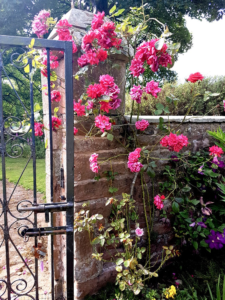 When Georgiana first began collecting, she didn’t know the names of plants, so she created a system whereby she named each of the seeds and their accompanying specimens, and asked Mangles to give her the names. In this extract this system is still place (evident through her mention of Nos 50 and 311) but she has learned the names of other plants and is keen to use them. Although she might not have been aware of it, Georgiana was practicing science: she created and organised her knowledge of  plants, then tested that knowledge against that of botanists such as John Lindley, professor of Botany at University College London.

Georgiana’s poetic tendencies appear in her use of adjectives such as ‘thickly studded’, ‘adorned’ and ‘small neat white’. Even more starkly apparent is Georgiana’s obsession with collecting, indicated by her comments ‘I ride out that it is not on your account’, ‘I discovered a plant I have been almost panting for’ and ‘these 4 things have occupied my mind many a long day’. The latter, in particular, indicates the intellectual nourishment that collecting gave Georgiana in a colony in which, when she first arrived, ‘Nothing was to be heard of but Beef and Pork’. Her joy in discovering these plants also underscores her sense of collecting as a vocation, as she wrote to Mangles, ‘when I sally forth either on foot or Horseback, I feel quite elastic in mind and Step; I feel I am quite at my own work, the real cause that enticed me out to Swan River.’

As Clarke and Spender relate in Life Lines, early women writers in Australia did not have access to publication, but this doesn’t mean they weren’t writing. Letter writing ‘could stir and challenge the creativity of the woman writer and promote a sense of power and pleasure in the achievement of the writing’ (Clarke and Spender, xxvi). Anyone who has read the letters of Rachel Henning will understand this, for Henning had a great capacity to stir her readers with plot and drama. Georgiana, too, used imagination and creativity to charm her audiences – at first Mangles, and now readers of the 21st Century. Her intelligence, fortitude and appreciation for her environment – so evident in her letters – continues to resonate and inspire.

Editor’s addendum: While working on Georgiana’s life, Jess came upon evidence that Georgiana’s husband John Molloy had been the instigator of a massacre of the local Wardandi-Noongar people in 1841. She wrote this up in: ‘Paper Talk’, Testimony and Forgetting in South-West Western Australia, Journal of the Association for the Study of Australian Literature, 2017/1 (here) and I subsequently posted on it (here).
wadholloway

Jessica White is the author of A Curious Intimacy, Entitlement, and Hearing Maud. Together with author Dr Amanda Niehaus, she is co-editor of Science Write Now, an online journal dedicated to creative writing inspired by science.
Her most recently published article, on representations of disability in Katharine Susannah Prichard’s Haxby’s Circus – Losing Sight of Billy: Moving Beyond the Specular in Haxby’s Circus in the ALS Journal of 23 May 2022 – coincides with our own recent focus on Nathan Hobby’s new biography of Prichard, The Red Witch.