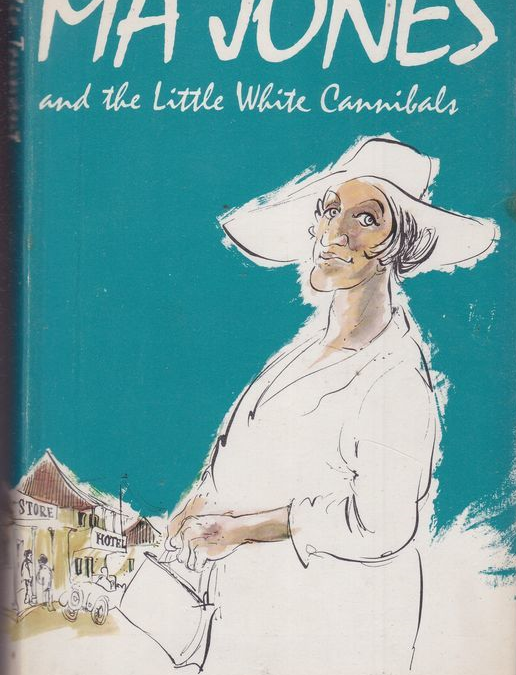 Kylie Tennant (1912-1988) was an important writer of the inter-War years, a social realist, briefly Communist, who researched thoroughly, and often lived, her subject matter. This later work, though, is more light-hearted .

Ma Jones and the Little White Cannibals (1967) is a collection of linked stories in which three middle-age-ish women, Leonie, who is the narrator, Honoria Cheeme, and their matronly friend Ma Jones, solve “problems”. I have not read CK Chesterton’s Father Brown stories for many years, but that is what this collection puts me in mind of.

It is interesting to note the year of publication, 1967, a year when we Australians were on a cusp. We (boomers) had grown up children of returned soldiers, children and grandchildren of the Depression, of Menzies’ white, white, white picket fence suburbia. But we were coming to adulthood with the music of Woodstock, hippies, draft resisters, Womens Lib, migration and multiculturalism. 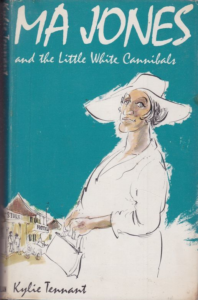 Whether these stories were directed at Father Brown, at men in general, or even at smart young women like my pin-up crush of those years, Emma Peel, and they definitely feel like they are directed at someone,Tennant is making the point that older women get stuff done. But she herself was in her 50s and the work feels directed backwards, not into the realities of mid to late 1960s Australia and certainly not into the future.

The cover notes (of the first edition I got for a recent birthday) say [Tennant has] “torn a strip off all those who take themselves too seriously.” But I think you would have to be old, to be have been old in 1967, to recognise off whom it was she was tearing a strip.

Ma Jones is the matron of a home for wayward girls, not that I’m sure this plays any great part in the stories. Leonie is typist/office manager for her solicitor cousin. Neither of them seems to have any trouble getting away from their day jobs to deal with “problems”.

There are 12 stories over the space of 180 odd pages. Someone, generally Honoria, brings a problem to Leonie’s attention, Ma Jones is called in, the problem goes away.

A student with a blemish-free family tree wishes to impress her lecturer; a clerk in Records is spoken to; a convict appears on a remote branch. A young man who attracts disaster wherever he goes is directed to where the damage might do some good. It is discovered how supposedly cremated bodies are turning up for dissection in anatomy classes; and so on.

Remember, back in the day, when the future of transport involved everyone buzzing around the skies like the Jetsons (1962)

‘I can remember,’ Ma said dourly, ‘when it was possible to walk across the street any time you liked without being fined. They ought to build the car routes underground.’ Ma does not drive a car.

‘Anyway, soon everyone will have helicopters,’ I remarked, to cheer her up, ‘and all the streets will be lined with grass.’

Of course, the other invisible ‘class’ in the 1960s was the First Nations peoples, pictured, if pictured at all, as living in the desert or on the fringes of white settlements, or as Tennant puts it, “They come from mission stations or those little jumbles of tin shacks by the rubbish dumps of country towns”.

In the story The Marginal Red-hot Seat, Wilfrid Spagthorne is being shoe-horned into a safe outback electorate. The problem is that he is so anti-social he may somehow manage to lose. Interestingly Ma’s solution turns on getting out the Aboriginal vote in this first ever year when they were included on the rolls.

… no Aboriginal girl is ever going to name the father of her child. Why should she? While the father is unknown, the government pays everything – pre-maternity allowances, special foods, child’s clothing, hospital, the lot. If she named the father, the Native Welfare would sue him for non-payment, probably put him in gaol, and where would the poor girl be. “She’d never admit it,” I said.

There are some made up tribes and made up skin names, a rain dance, all mildly patronising.

As always at that time, authors worried about the Australian public’s taste for Bush Realism, or more often in popular fiction, for Bush Romance.

Ma Jones sticks to the old Australian fiction in which a drover moves along behind thirsty cattle until they come to water. ‘Or something about a sheep station,’ she added approvingly. ‘Preferably going broke. Nice and peaceful. And maybe a little horse-breaking thrown in. Or building a dam’

It is surprising how many people share Ma Jone’s view of what constitutes literature.

Over the next few months we have planned, from our guest contributors, reviews of at least two of Tennant’s more serious works, respectively her first and third, Tiburon (1935) and The Battlers.(1941).

This Friday’s ‘From the Archives’ will be “Back to Battling”, a non-fiction extract about Tennant…