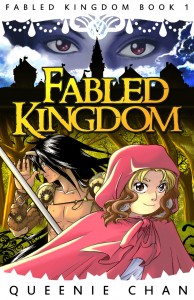 Over April we were thrilled to publish guest posts from three Australian women writers of ethnic heritage: Queenie Chan, Marisa Wikramanayake and Maxine Beneba Clarke. They each wrote on very distinct aspects of their identity, from the representation of girls in graphic novels, to history and language, to the importance of solidarity for women of colour in Australia. Queenie Chan is a graphic novelist who was born in Hong Kong and migrated to Australia when she was six. As ‘a writer who draws’, Queenie challenges the cultural fixation on the appearance of young women by creating ‘girls and women of various shapes, sizes, ages and ethnicities. Sometimes these women are interested in romance, sometimes not, but all of them have the same agency as the male characters do’.

In an ensuing discussion on her piece, Queenie pointed out that as, historically, most art and culture has been produced by men, the roles which women can inhabit are those envisaged by men and they are extremely limited. In order for women to move into new roles, they need to imagine and create new definitions of themselves, and this act of imagining needs to begin at a young age. As Queenie writes regarding female politicians, for example, ‘to even CONCEIVE of a woman as a politically powerful being, you have to have seen politically powerful women from the very beginning of your life (ie. when you’re very young).’ Pop culture is an effective medium of reaching young women and girls, as are graphic novels, particularly as we live in an increasingly visual culture. Queenie’s work contributes to the process of opening up the world to women, and if you’d like to read or buy some of it, you can visit her website.

Marisa Wikramanayake, a writer and editor whose work has appeared in Seizure Online, was born in Sri Lanka and has lived in Australia since 2004. She describes herself as:

part of the war generation, Sri Lankan, Sinhalese-Burgher (Dutch Euroasian mix), European heritage, Colombo (capital city) elite, English is my first language, somewhat Anglophilic immediate family culture, a minority in my own country, privileged in a lot of aspects whenever English language skills are held in high regard but otherwise on the fringes, now also holding Australian citizenship and straddling both nations as best I can. And always othered in some way, shape or form. Oh and I am a woman of colour. Marisa reflected on her multifaceted identity in terms of her reading and writing. With parents educated in English, it was inevitable that she would grow up reading texts written in English, but in the pages she turned she couldn’t find ‘people like me, brown in skin, this weird European with a dash of spice mix in my head, female and big mouthed’. People who can’t see themselves reflected in their culture will, she writes, experience hireath, a homesickness. They will ‘try desperately to fit in rather than be themselves and play by rules set by people who don’t know them.’

Recognising that people are diverse and can take any number of identities, Marisa writes characters who are a ‘mishmash of twelve hundred different traits any of which could affect them in different ways and to different degrees’. Her stories are about experiences that are universal, rather than being pinned to the war of her heritage, and they encourage readers to be comfortable in their own skin. If you’d like to hear more about Marisa and her writing, check out her website. Maxine Beneba Clarke is an Australian writer and slam poetry champion of Afro-Caribbean descent. She’s the author of the poetry collections Gil Scott Heron is on Parole and Nothing Here Needs Fixing and the award-winning debut short story collection, Foreign Soil.

In her post, Maxine writes about her friendships with Melissa Lucashenko, Randa Abel-Fattah, Alice Pung, Ali Cobby Eckermann, Tariro Mavondo, Ellen van Neerven and Anita Heiss. Although these women ‘are of different backgrounds, have different stories’, and although ‘many of the challenges Indigenous women writers face, in making their voices heard in their own land are different and distinct from those faced by migrant writers of colour’, Maxine shares with them ‘an inescapable, almost indescribable connection.’ These women give her strength and solidarity amidst the ‘blinding, breaking fatigue that being the bearer of difference can bring in the Australian literary world’.

This fatigue is testimony to the homogeneity of our literary culture and it shows how far we have to go before the voices of women writers of colour become mainstream. As readers however, we can challenge this homogeneity by reading, reviewing and discussing the writing of such authors. As with Queenie and Marisa, you can head to Maxine’s website to find her books and join in this process..

Queenie and Marisa also underscore Maxine’s observation that she is ‘part of a new and exciting and exuberant chorus: a single voice in a sometimes jubilant, sometimes melancholic, harmony that has waited for so long to be heard’. Participants in the Australian Women Writers Challenge can listen to this harmony by reading these writers’ works, and I look forward to coming across your reviews of them as I write my monthly roundups!

I’m Jessica White, a novelist and researcher, and I’ve been deaf since age 4 when I lost most of my hearing from meningitis.  I have a PhD from the University of London and have published two novels with Penguin, A Curious Intimacy (2007) and Entitlement (2012).  I’ve received funding from Arts Queensland and the Australia Council for the Arts to write my next two books, a memoir and another novel. You can find more information about me at my website.  I’m also on Twitter @ladyredjess.