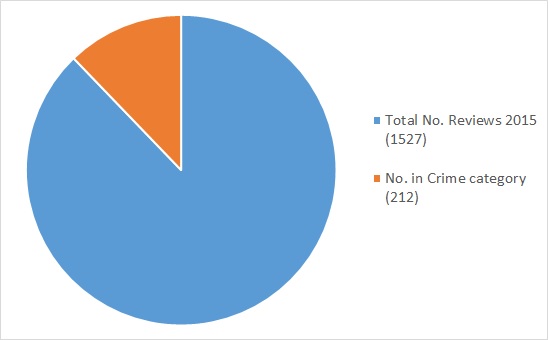 Officially known as the crime, mystery, thriller, detective and suspense category of the Australian Women Writers challenge my favourite genre has continued to attract a decent amount of interest from participants, or a healthy slice of pie as can be seen from this chart In more numerical news in 2015 there were

As always, I’ve only included for discussion here the reviews that were marked as belonging to this category. As we all know the genre boundaries are often blurry and many books that could appear here were marked by their reviewers as belonging to other categories such as historical fiction or young adult. But one has to draw a line somewhere right?

Ann Turner’s debut novel THE LOST SWIMMER attracted the most reviews with a total of 10. The book depicts what happens when an archaeology professor is accused of fraud then ‘loses’ her husband Stephen during a working holiday in Europe.

At Devoted Eclectic Elizabeth Lhuede says of the book

While at Beauty and Lace Michelle says

Turner explores the slippery slope we find ourselves on when trust is compromised and secrets are kept. It has often been said that those who mistrust are often the ones with something to hide… so if Rebecca is so determined that something is going on with Stephen, even though she has no proof, what does that say about what’s going on with her?

Most reviewers found the novel enjoyable with Brenda summing up sentiments nicely by describing the book as  “Tense and gripping, the pace was incredibly fast – it was hard to put down“.

Interestingly, more than one reviewer took issue with the book’s publicity as a ‘literary’ thriller, which suggests the tension between popular fiction and literature is ever ongoing as we query why some publishers feel the need to (mis) label their products in this way.

The next most-reviewed title was Kylie Kaden’s MISSING YOU which scored 8 reviews. It depicts a love story that goes awry when both parents of Eli, a young boy on the autism spectrum, disappear within a day of each other. The story unfolds from both of their perspectives as well as that of the boy’s grandfather Patrick who is left suddenly to care for Eli.

At All the books I can read Bree says

Missing You is Australian author Kylie Kaden’s second novel and delivers an intriguing mystery as well as exploring family dynamics, the difficulties in parenting a special needs child and how quickly things can change when you go from childless to being responsible for someone 24/7.

Missing You is a wonderfully crafted story blending the very real issue of caring for a high needs child with a suspenseful mystery. I thought the switching POV worked well and kept the reader fully engaged with all threads of the story. The flashbacks woven into the narrative were also an important tool in giving the reader a true understanding of Ryan and Aisha’s back story and how they have come to such an impasse in their relationship.

The voice of Patrick won the hears of our reviewers and the alternating perspective structure was popular too. Deborah at Debbish summed up sentiments well by saying it’s a ‘”fabulous second novel” and noting that it and its characters are better than she anticipated from the back cover blurb.

Other books that scored well in the review count were Shannon Curtis’ RUNAWAY LIES and J.M Peace’s A TIME TO RUN with 6 reviews each and Susan May’s DEADLY MESSENGERS, Bronwyn Parry’s STORM CLOUDS, Nicole Trope’s HUSH, LITTLE BIRD and Felicity Young’s THE INSANITY OF MURDER all garnering 5 reviews each. Other popular authors included Rachel Amphlett who had 4 different books reviewed for a total of 10 reviews. Felicity Young also totaled 10 reviews with 5 of those being for earlier releases than her 2015 offering and the ever-popular Kerry Greenwood garnered 6 reviews, each of a different book from among her 30+ published titles.

As was the case last year Brenda who reviews at Good Reads was the most prolific reviewer with 42 to her name (and similar numbers in several other genres so clearly a voracious reader). Carolyn, who also reviews at Good Reads, posted 16 reviews in this category and Carol from Reading, Writing and Riesling wrote 12. I wrote the same number but only remembered to link 8 of them for the challenge so my double digit effort doesn’t quite count!

The oldest book reviewed for the challenge was 1948’s MURDER IN THE TELEPHONE EXCHANGE by June Wright. Maggie Byrne is the young operator who investigates a colleague’s murder and at Newton Review of Books Karen says of the book

Intrigue in Wright’s world comes out of the mundane and domestic, the landscape and location, and the clash within families and communities. Her way of getting Maggie into the thick of it all is disarmingly simple: make her present at the point at which the possibility of murder occurs; make her curious as she accidentally eavesdrops on a conversation

I actually forgot to link my own review of an older book for this challenge so it’s not counted in the official numbers but I’ll mention it here as another plug for a locally written classic of the genre. 1969’s THE WHISPERING WALL by Patricia Carlon takes place almost entirely in one room of a house in which a paralysed, speechless woman overhears a murder plot and I thought it a fabulous read:

It seems impossible that such a richly drawn story progresses forward almost entirely based on what an immobile woman hears but it is a testament to Carlon’s writing skill that such a narrow perspective provides a more thoroughly gripping read than many of today’s much-hyped blockbusters. This is a genuinely suspenseful domestic setting and seemed to me to be as scary today as it would have been on publication.

Alas both of these books are only accessible thanks to modern re-publishing efforts by niche publishers and I remain disheartened at how difficult it is to track down titles of any age by Australian women crime writers. I’ll keep looking though.

It would be remiss of me not to mention my favourite review of the year which was Brona’s enthusiastic discovery of Dorothy Porter’s 1994 crime novel told in verse THE MONKEY’S MASK. At Brona’s Books she says that its main character is like a poetic Philip Marlowe and adds

I am pretty sure there wasn’t a single review of a true crime book written by an Australian woman writer submitted for the 2015 challenge (we don’t have a separate tag for that so I may have missed something, if so I apologise). I prefer my crime reading to be of the made up kind so I can’t chastise anyone else for not reading in this sub genre but I do wonder if there is a reason that we collectively don’t seem drawn to these stories. Something to ponder.

And that wraps up another year of reading and reviewing Australian women crime, mystery, thriller, detective and suspense writers. Hope you’ll all join us again in 2016 and if you’ve already read all of the above books you might start browsing the Challenge’s database of reviews for some other titles to look for.

I’m Bernadette Bean. I’ve been reading avidly for as long as I can remember, blathering about the subject since late 2008 at Reactions to Reading, am co-host of Fair Dinkum Crime, a site devoted to promoting and discussing Australian crime fiction, and have twice been a judge for a national crime fiction award. I’ve been wrangling the crime category of the AWW challenge since 2012.