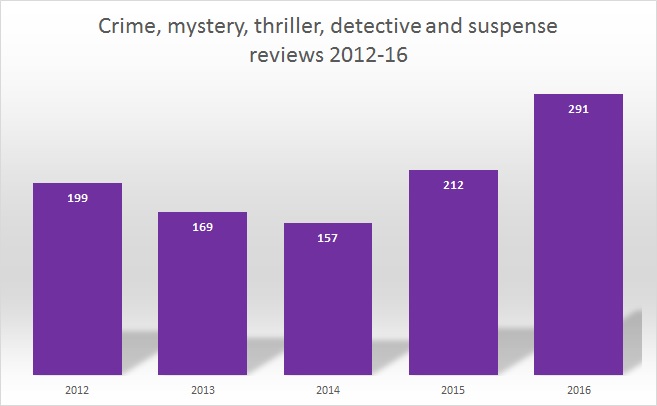 The crime, mystery, thriller, detective and suspense category of the Australian Women Writers Challenge continues to attract a healthy amount of interest from Challenge participants. In 2016 the numbers of interest included: Three books scored a dozen reviews each during 2016. ALL THESE PERFECT STRANGERS by Aoife Clifford is one of the debut novels that proved popular during the year. At Newtown Review of Books Ruth Wykes said of it

Crime fiction in Australia is a genre that will welcome a rethink of the formulaic novel. There are numerous ways to tell a story, yet for many years there has been a reluctance by writers to experiment. It is refreshing to see an author challenging this, and All These Perfect Strangers is anything but formulaic.

To begin with it shuns the notion that every good crime novel needs to have a strong sense of place. This is a brave move.

Sara Foster’s domestic thriller ALL THAT IS LOST BETWEEN US explores the dangers of keeping secrets. At The Incredible Rambling Elimy Elimy wrote

This book is a real page turner, and it gets the moments of tension just right. In the hands of a less skilled writer, perhaps the novel might have strayed into melodrama, but Foster has kept a stern control of her moments of tension, leaving the story beautifully paced and impossible to put down.

Amanda Ortlepp’s RUNNING AGAINST THE TIDE combines rural crime and a dash of romance and her characters and intricate plot were particularly popular. At Book Muster Down Under Marcia said

As in real life, appearances can be deceiving so, whilst reading this novel, be careful where your loyalties lie because Amanda blurs the focus so well that by the time the story climaxes and goes into denouement, every belief you once held about every character will be shattered. Whether, on one level or another, you connect with them sympathetically or unsympathetically, the big question that will remain right to the end is, who is behind it all? Jaye Ford’s DARKEST PLACE (11), Jane Harper’s THE DRY (11) and Ann Turner’s OUT OF THE ICE (10) also proved very popular with AWW reviewers. Of all this genre’s books to get wider attention my purely observational evidence is that Jane Harper’s THE DRY – about a possible murder suicide in drought ravaged rural Australia – was the novel being discussed in odd (i.e. non crime reading) places this year.

The only author other than those already mentioned who hit double figures as far as reviews are concerned is Sulari Gentill whose series set in 1930’s Australia scored a total of 13 reviews. Each one of the series’ seven novels attracted at least one review this year which presumably means I am not the only reader impatiently awaiting the 8th instalment of the adventures of Rowland Sinclair and friends due in the second half of 2017.

I thought I’d highlight a couple of the books receiving only a single review during the year too because it’s not all about popularity right?

At Whispering Gums fellow Challenge co-host and avowed non-crime reader Sue discussed Dorothy Johnston’s THROUGH A CAMEL’S EYE. Sue enjoyed the bits of the novel that weren’t about the crime but that’s not unusual…I’m rarely interested in the blood and guts either. Or even the forensics that have become so popular in recent years.

…we have an archetypal “misfit” situation – two people working together, neither of whom are completely comfortable in their skins. It is the development of these two characters and their relationship, rather than in solving the crime, that I enjoyed most in the novel….Through a camel’s eye relies more on the little details of lived lives than on the big dramas to provide interest, which is exactly why I enjoyed it.

This was a spine-tingling and chilling thriller that will have you on the edge of your seat. I read it in one day, unable to put it down until I found out how it all ended. Em Bailey is such a talented writer and has crafted one creepy tale that could so easily become real. Esther [the protagonist] was so life like, and I felt her every fear, her torment, her panic. It was full of many heart-breaking and heart-stopping moments that will leave you holding your breath.

If you can’t wait for the bi-monthly challenge wrap-ups for recommendations of what to read you can always seek out the genre’s prolific reviewers. No one following this Challenge will be surprised to learn who heads the list (the woman is a reading machine) but there are others too

As already mentioned the entire Challenge is placing a special emphasis on classics for 2017 so I’ll be looking to highlight some classic crime fiction. Getting hold of books is proving the most challenging thing of all but I’m not giving up. If you know of any good crime reads by Aussie women writers published prior to 1980 (my personal, random cut-off point, not an official definition) feel free to list them in the comments. And if you are a bookseller who actually has some eligible titles in stock feel free to leave a comment or get in touch with me via email.

Interest in true crime is exploding in some media segments (podcasts and documentaries most notably) but has never been well represented in the AWW Challenge. I’m part of the problem being that I’m too big of a wuss to read much of it but I have promised to read at least one of the short list for last year’s Davitt Award for best true crime novel during 2017. Can I tempt you to join me? Or to recommend some other true crime novel by an Australian female author I ought to read?

I’ll be continuing with the bi-monthly wrap-ups of most interesting reviews posted for this genre during the year and in the off-months will be highlighting Australian female crime writing in some other, yet-to-be determined manner. Look forward to sharing it all with you.

Do consider signing up even if you’ve never done a reading challenge before. You don’t need to have a blog or Goodreads account and the Stella level of the Challenge only requires you to read 4 books. Easy peasy. For ideas of what to read, news and discussion about the Challenge