Young Adult Fiction Round up: Issue 2 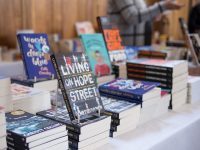 Welcome to the second round up of young adult fiction reviews for the year.

Earlier this month, the winners of the Victorian Premier’s Literary Award were announced and two young adult fiction titles were recognised:

Series books proved popular this round up–These Broken Stars (the first in The Starbound Trilogy) by Amie Kaufman and Meagan Spooner was reviewed by H.M.Waugh who particularly enjoyed the multiple plot themes, realistic characters, and subtle introduction of ideas. Waugh enjoyed the book so much she deconstructed it to better understand the craft behind the story:

And it only got better on my second read, because it was so crafty I didn’t notice some of the cool things the authors were weaving into it until I started analysing.

Kira Jessup reviewed Gemina (book 2 of the Illuminae Falls) by Amie Kaufman and Jay Kristoff and was riveted by the many twists and turns in the story.

Ironheart (book 2 in the Valentine series) by Jodi McAllister was reviewed by Elizabeth Fitzgerald who was impressed that the book advocates for healthy relationships:

Ironheart continues to push back against the idea that romantic love is the be-all and end-all. Pearl is very clear that living a life where Finn is the sole and central relationship isn’t one that’s going to be fulfilling to her–her relationships with her friends and family are no less important. It was a refreshing perspective.

Graevale (book 4 in the Medoran fantasy series) by Lynette Noni was reviewed by Ashleigh Meikle who says that Graevale is an unforgettable read:

The Medoran Chronicles by Lynette Noni have been described as ‘a game changer’ in YA fiction. A page-turning fantasy series about friendship, finding yourself and the ultimate battle of good versus evil. The Medoran Chronicles are perfect for fans of Sarah J. Maas and Rick Riordan. The eagerly anticipated fourth book in the series builds to a stunning climax with shock twists and devastating losses. Graevale is an unforgettable read.

While Nevermoor: The Trials of Morrigan Crow (the first book in the Nevermoor series) by Jessica Townsend is not strictly young adult fiction (YA fiction is aimed at readers 14+ years) it seems to slip in the YA reviews so I thought I’d include this lovely review by Brenda:

Nevermoor, first in the Nevermoor series by Aussie author Jessica Townsend is absolutely, breathtakingly brilliant! Fantastical, clever, imaginative, magical – I was riveted, unable to put it down. The author is destined to go a long way in my opinion – and this is her debut!

Cassandra Page devoured The Last Days of Us by Beck Nicholas within a matter of hours.

…The Last Days of Us is a powerful exploration of grief and grieving. As the blurb says, Zoey is trying to piece her life back together after losing herself in alcohol and wild parties following her brother’s death. She has broken up with her boyfriend, has grown distant from her best friend (who is now dating her boyfriend, so that seems fair), and is estranged from her parents. She can see that her life is a mess, but the only way she can see to fix it is to try and return to the “old” Zoey, the one she was before Dan died. She tries to do this in a very literal sense — same haircut, same fashion sense, same boyfriend.

H.M.Waugh also reviewed The Stars at Oktober Bend by Glenda Millard which incorporates big issues like child soldiers, sexual assaults, race, and disability but overwhelmingly was a book of hope.

Taryn Bashford’s debut novel, The Harper Effect reminded Tien of how hard life can be, especially on the cusp of adulthood.

And finally, I reviewed Wreck by Fleur Ferris which was thrilling and suspenseful, although Black is still my favourite of Ferris’s books.

Please keep sharing your reviews, both on the AWW database and over at Facebook in our Love Reading Books by Aussie Women group.

See you next time,

A little about me…

I’m a young adult author and short story writer. A second edition of my debut book, Jenna’s Truth, will be out in April 2018 from Serenity Press.