History Memoir and Biography Round Up : September 2018 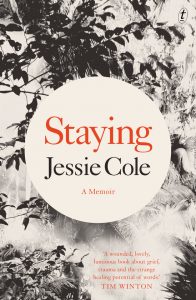 The ninth month of the year, and nine reviews!

Books we haven’t seen before

Among the longer reviews posted during September, two were based on twenty-first century events, while two were centred in the past. The recently released Staying: a memoir  is Jessie Cole’s third book after two previous works of fiction released in 2013 and 2014. Belinda Hopper found the memoir “quite overwhelming to read”, writing in her review:

From the very beginning of the book she lets the reader know that her father committed suicide while she was a teenager and the memoir then relates the series of events that led to this devastating death….This memoir is beautifully written, just like Jessie’s previous works of fiction. It is also very brave to able to set down in the form of a memoir the heart wrenching story of her own family (review here).

Book editor Phillipa McGuiness initially wondered who she could commission to write a history of the year 2001 – a year seared in our memories through 9/11, Tampa and the war in Afghanistan – and then she realized that she could write her own story of that year that brought her both political and personal trauma. In her review of: The Year Everything Changed :2001 The book is arranged chronologically by month, with each month devoted to a particular theme. This is, of course, somewhat as an artifice because events do not restrict themselves to one month only, although often there is often a peak incident (most especially 9/11 and the invasion of Afghanistan) to crystallize a particular date….I enjoyed this book and its interweaving of the personal and the political. It is very much a mainstream left-leaning analysis … that ranges across a huge amount of territory in an engaging way (review here)

Two of the reviews received this month were located further back in time. Janet Lee’s The Killing of Louisa is a re-imagined retelling of the true crime case of Louisa Collins, the last woman hanged in New South Wales in 1889. Theresa Smith conducted an interview with the author, and Cass Moriarty reviewed the book, noting:

The case of Louisa Collins is well-known, the details of her fate are officially recorded, and several previous books have described her life and the trials which came to end it. But it is testament to the author’s skill that despite knowing the outcome of the book before we begin, the narrative is nevertheless compelling and engaging….Louisa Collins comes to life in this book – her personality and appearance and her relationships with others have been richly invoked – and by the end of the story, we feel we have come to know intimate details about her, and have witnessed one possible perspective of what might have happened and how and why certain events might have taken place (review here) Ann Marsden’s And the Women Came Too: The Families of the Founders of the Melbourne Mechanics Institution is a follow-up to her earlier book about the men who were elected to the committee of what became the Melbourne Athenaeum in the early years of Port Phillip. Janine at Resident Judge read this group biography, writing:

Anne Marsden’s book is a testament to her patient digging as a historian and her recognition that all these ‘mover and shaker’ men starting up new enterprises and institutions in an infant colonial town, had women behind them. It reminds you that Port Phillip was a town for women and children as well as for the ambitious new arrivals, and that even though it might not be readily visible in the public record,  the domestic always underpins the civic (review here)

Also noted for the first time this month was Finding my Place, written by Anne Aly. Reviewer Claire Holderness found this memoir by Australian’s first female Muslim M.P. “an interesting, eye opening and thought-provoking book about so many topics. Growing up in Australia feeling different to those around you, religion, beliefs, family, racism, politics and so much more”. A book which could scarcely differ more was Always With You, written by Australian psychic Debbie Malone. Tracey at Carpe Librum found it a “short, quick and enjoyable read”, but recommended starting with Debbie’s previous two books if you’re interested in finding out about mediums and life after death.