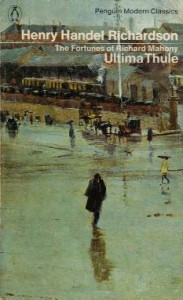 It’s the second Wednesday in October, so you know what that means? Yep, it’s Literary and Classics Round-up day. I don’t have much intro for this month, so let’s just get into it …

Like last year, our September figures are less than August’s but, at 42, they represent a 10% increase on last September’s count. I keep harping on these increases because they tell us that our Challenge is continuing to grow, which is a good thing, n’est-ce pas? Here are some highlights:

The six classics this month included calzean reading the three volumes – Australia felix, The way home and Ultima thule – that make up Henry Handel Richardson’s The fortunes of Richard Mahony trilogy. She clearly enjoyed the set, writing in her review of the last volume:

It is without question Richardson’s most important work. Her brilliant analysis of human inadequacy, of the gulf between the ideal and achievement, and of the complexities of circumstance, environment and human frailty, make her one of Australia’s most distinguished novelists. In The Fortunes of Richard Mahony she brings together knowledge of a significant period of Australian history, an understanding of human weakness, and a grasp of the principles and techniques of the best European and Russian writers of the nineteenth century.

Calzean also read Rosa Praed’s Lady Bridget in the Never Never Land (1915) – and had mixed feelings about it. Its strength, she says, is its two strong-willed characters – the English Lady Bridget and the “battling stockowner in remote Queensland.” It was written in 1915 but is set in the mid-1800s. The problem is that it is now dated. Calzean writes:

This is a book of its time with views no longer acceptable. The coloniser’s rights to land, use of its superiority of weaponry, lack of women rights and abhorrent statements about Aborigines all make this a bit hard to read.

Another regular reviewer here, Jennifer Cameron-Smith, reviewed Helen Garner’s Honor and Other people’s children (1980), which comprises two novellas. She describes the two stories briefly, and then writes that:

I found these earlier pieces by Helen Garner interesting. While I prefer her non-fiction to her fiction, her keen observational skills and her ability to use words to craft worlds in microcosm is as clear here as it is in her later work.

And finally, we have Elizabeth Harrower’s The Catherine wheel (1960), reviewed by Kim Forrester (Reading Matters). Harrower has been experiencing quite a resurgence in recent years with the re-release of her books by Text Classics. Kim writes that The Catherine wheel “features all of Elizabeth Harrower’s literary trademarks: a young woman, a claustrophobic relationship, a brooding atmosphere and brilliant psychological insights.” Also, Kim says, like other books of hers, this is a “slow-burner” that “painstakingly sets the scene” for the psychological drama. The book did try her patience at times, she admits, because it’s slow, even for a character-driven novel, but she did find it fascinating, partly because it offers “an insightful look at unstable personalities, alcoholism and the far-reaching effects of psychological abuse.” If you haven’t read Harrower, you should consider it – the books are easily available at present, and at good prices.

“Diversity” is, to use a popular phrase at the moment, a broad church here at the challenge (and it does have its own editor, Jessica White.) Like the “literary” tag, it can be applied to any genre reviewed – and books reviewed for the challenge can be tagged with both “literary” and “diversity.” So, for example, this month “literary” books include indigenous author Melissa Lucashenko’s Too much lip, Claire Varley’s The book of ordinary people whose characters include an asylum-seeker, and Amanda Curtin’s The sinking, a historical novel about a murdered intersex person. These are just three of the eight books.

Cass Moriarty found Melissa Lucashenko’s, Too much lip, a powerful, powerful read. She says, among other things:

This book is good. Very good. It is an unflinching, raw and honest exploration of one modern-day (fictional) Aboriginal family, with all its flaws and problems. But it is also a book that offers important cultural and historical insights into intergenerational trauma and abuse. It is a book that doesn’t waste time asking questions such as why and how, but instead jumps straight in and provides the answers by depicting the effects of history. Yes, I’m talking about colonisation (or invasion) and massacres, about slavery and stolen land and stolen children, about one group of people attempting to systematically crush the spirit of another.

She concludes, sensibly, that “As a non-indigenous reader, I can’t pretend to understand the pain that has birthed this book, but what I can do is open my ears and listen. Look and listen. And try to learn something.” This is why we need to read “diverse” fiction.

Theresa Smith reviewed Claire Varley’s The book of ordinary people. She loved the clever way the story is told, the way the disparate stories come together, but more than that she thinks it’s a book all should read:

There’s an important message at the forefront of this novel, about looking past the window dressing of people, past the outer layer, the status and the labels, past the stereotypes and pre-conceived notions, right into the very heart of your fellow ordinary people.

Beautiful prose, two stories (one from the past and one from the present) twist around each other, and the questions that arose for me (who are we and what makes us) made The Sinkings a wonderful read.

Who we are and what makes us – the value of thinking about these questions is, yes, I’ll say it again, why we need to make sure our reading is diverse.

We had just one award of specific interest to this area make an announcement this month, and it’s the ..

The Voss Literary Prize is a literary award that was first offered in 2014. It is not, as you might think, named for Patrick White’s famous novel, but for the man, Vivian Robert de Vaux Voss, whose will stipulated that a literary award be established “to reward the best novel from the previous year.” The award is managed by the Australian University Heads of English, with the winner being announced, I believe, at their annual meeting in November. The longlist of ten novels was announced in September: not only are seven by women but every one of them has been reviewed for the challenge. Way to go!

And so ends another round-up. Do any of this month’s books tempt you? If so, or even if not, we’d love you tell us in the comments.