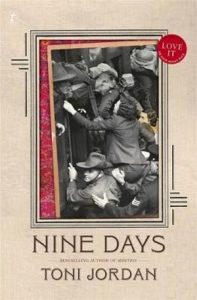 Another year, and what a start we’ve had to it here in Australia. I do hope all our readers here are safe. Our review numbers are down on last year’s by nearly 15%, which may be explained by many of us being focused on other things.

Another year also means the start of another awards season. I have decided to change a little how I handle awards this year. Last year I only announced, in my month round-ups, the awards announced that calendar month, which sometimes resulted in quite an artificial delay. This year, while my round-ups will continue to be based on the named calendar month, the awards news will be for awards announced between my two round-up posts. This means, for example, that in this post I will include the early February announcement of the Stella Prize longlist rather than holding it over, as I have in the past, for the February round-up. I hope everyone is happy with this!

Although our January figures were down on last January’s, we still had 46 reviews posted, which is perfectly respectable. Here are some statistical highlights:

For the third time running, Bill (The Australian Legend) hosted his Australian Women Writers week on his blog, this time for Gen 3 writers. Only a couple of the reviews have, so far, been posted here, but I’m hoping that more will find their way over here, eventually! Meanwhile, this month’s Classics authors were Dora Birtles, Ruth Park (with her husband D’Arcy Niland), Madeleine St John, Angela Thirkell, and Amy Witting (2 books).

Two of these, Dora Birtles and Angela Thirkell are new to the challenge, so I’ll share those reviews. Birtles was an interesting woman, who turned her hand to many things, one of which was being a researcher on the classic Australian film, The overlanders (1946). The book reviewed for the challenge is The overlanders, which she wrote based

on that film! Blogger Alex Daw (Luvvie’s Musings) addresses the datedness of the book, saying:

I grew up on a steady diet of Seven Little Australians et al, so the writing is familiar, if sometimes politically incorrect.  Aborigines are referred to as Abos or blacks.  It’s set during WWII and the Japanese are called Japs.  But the female characters are strong and hardy.  They can catch and throw down a steer when required and head off a stampeding mob; very satisfying indeed.

But, she also says why we should read it – because it’s “a cracking good read”, the characters are developed well, the writing is good, and, what’s more, “there’s passion and love for the country which rang particularly true for me during these heartbreaking times.” A very worthy addition to our classics list!

Angela Thirkell is a bit of a ring-in, as she was English-born and did all of her writing in England, having lived in Australia for 9 years of her adult life. However, she wrote one Australian novel, which is regarded as a work of Australian literature, hence her inclusion here! The novel is Trooper to the Southern Cross, and it was reviewed by me, Whispering Gums. The novel is based on Thirkell’s trip to Australia in 1920 on the requisitioned German troopship SS Friedrichsruh which, like the novel’s fictional Rudolstadt, had been cleverly sabotaged by the Germans. For example, the toilets flushed boiling water and salt water flowed from freshwater taps. The ship carried officers with their wives and families, “ordinary” diggers, and prisoner diggers who soon had it over the soldiers guarding them. It’s a rambunctious trip and Thirkell tells it in the voice of an officer who was inspired by – with some major differences – her husband. I concluded my review, with

As a document of 1920s Australian manners and culture, told with a lightly satiric eye, Trooper to the Southern Cross is a surprisingly entertaining read.

PS: Myrtle Rose White’s 1932 memoir No roads go by (reviewed by Bill) is also new to the challenge, but had not been marked as a Classic so was not picked up in my sweep.

Actually, just one 2020 literary release was reviewed in January, so that makes this easy. The book is Leah Swann’s Shee

rwater, and it was reviewed by Heidi (but books are better). Heidi found it hard to write about this book that sounds like a mystery – because in it two boys go missing – but isn’t. She says:

Let me also make it clear that you should not make the same mistake I made, and pick this up thinking it is mainly a mystery. I was somewhat puzzled when the “mystery” component was pretty much obsolete by the second part of the book. Instead, choose this book knowing it is about relationships, parenthood, trauma, domestic abuse (in all its shapes and form) and the unravelling of the human psyche into darkness.

She liked it, but also warns that its emotional impact is big.

The shortlist for the Indie Book Awards – which are voted by Australia’s independent booksellers – was announced on January 15. There are books by women in each of the three main categories of interest to my section. CHECKAll have been reviewed for the Challenge, which is pleasing to see, though not all in January.

Debut fiction (all 4 by women)

All have been reviewed for the Challenge, which is encouraging to see. Two of them were reviewed In January, Favel Parrett’s and Heather Rose’s, both by Cass Moriarty, so she gets two guernseys this post. Cass calls Heather Rose’s Bruny

a political satire, a fable, an allegorical tale about climate change and globalisation, about the collection of personal information, back room deals and cheap foreign labour, about elections and conspiracies and protest groups and international mediation.

The winners will be announced on 23 March at the 2020 Leading Edge Books conference in Brisbane.

The Stella Prize longlist was announced on Thursday 6 February, and is an interestingly eclectic list – as it usually is: five novel (including a graphic novel and a young adult novel), three short story collections, two memoirs and two other non-fiction works.

Last year, all twelve had been reviewed for the challenge. This year, however, SEVEN have not been, that’s more than half. This is rather astonishing, given the breadth of readers contributing to the challenge. Anyhow, the books not yet in our review database are: Joey Bui’s Lucky ticket, Gay’wu Group of Women’s Songspirals, Jess Hill’s See what you made me do, Yumna Kassab’s The house of spirit, Mandy Ord’s When one person dies the world is over, Josephine Rowe’s Here until August, and Sally Young’s The paper emperors: The rise of Australian newspaper empires. If you want to make a name for yourself AND help us out, you know what to do!

One was reviewed this month, so let’s look at it. It’s Favel Parrett’s There was still love. Cass Moriarty (GoodReads) was the reviewer. An immigration story, inspired by Parrett’s Czech grandparents, the book is, writes Cass:

simple and spare, poetic and rhythmic. Myths, legends, superstitions, family lore, cultural customs – all come together in a beautiful rendering of how love prevails, despite everything.

The shortlist will be announced on 6 March.

The winners relevant to this section of the Challenge, are:

Thompson and Higgins have been reviewed for the challenge, but not Charmaine Papertalk Green’s book. Are there any poetry lovers out there who’d like to review it?