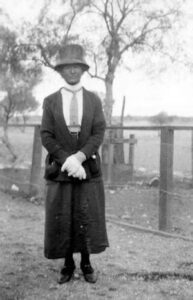 Daisy Bates (1859-1951) was one of Australia’s best known women between the two World Wars, famous for living in a tent beside the Trans Australian railway line in the desert at Ooldea. She was a dedicated anthropologist, documenting the languages and customs of Indigenous peoples first in WA and then in SA; supporting herself through journalism, of which this piece is an example.

One often wonders whether the route along which certain aboriginal myths and legends may be traced is an indication of the old route traversed by the progenitors of the tribes possessing these myths, in their journey from the northern points of entry to the various waters beside which they settled in the long ago. Aboriginal bondage to tradition still survives, and tribes, now far apart, whose very dialect has changed in the centuries, possess myths and legends whose similarity is evidence of tribal unity in some far-off time.

Especially is this the case in the stellar myths of the aborigines. Our “Zodiac” is known to them as a “dhoogoorr yu-ara,” a winding road of the dream times, along which stars and constellations now travel that were once men, birds, beasts, and reptiles, metamorphosed into, stars because they brought fire or watery victory, or some special benefit or relief to the tribe or group that translated them into heavenly bodies, flood and evil persona and creatures have been transformed into stars, but I have not yet found in any group a myth of the Deity or “All-Father” such as the “Pundjil,” or “Baiamai” of eastern tradition.

The circumcised hordes who possessed almost two-thirds of the continent at the time of white settlement, brought many quaint myths with them, or originated these during their journeys southward, east-ward and westward, through the centuries, Sun, moon, and stars figure in the legends of these circumcised people. Curiously enough, Jupiter and Venus, both males, are associated in a myth covering.a large area of South and Western Australia. Near or far apart though these planets may be as they travel over their appointed track, they are Katta-ku-dharra (heads two), having no bodies, but always following one another along the “dream road” which they themselves had made after their translation.

One myth (with slight and unimportant changes) was obtained from the surviving members of the Willilambi (Twilight Cove) group, and also from some border area (S.A.-W.A.) groups, and others whose waters were west and north-west of the Central and Border Ranges. I relate it.

In the dream times of long ago, the mulba (men) of Willilambi “wammu” (fire, home), lived in great fear and trouble. Walja, the eaglehawk, whose fires were far north, was their enemy, and whenever he came near their home he shouted at them. Every time he shouted a boy died, and when he broke off a branch of their sandalwood a boy died, so that the Willilambi men had no boys for their initiation ceremonies. They tried to spear the eagle-hawk, but their spears were too slender and soft, and would not pierce his hard skin. Also they were in constant fear that he would break the big tree which grew near Willilambi, and which held up the sky, for if this great tree were broken the sky would fall down and darken the earth and all the men and women would die.

There were two big brothers, Badhu-wudha, the right-handed, and Koorulba, the left-handed, who were goon-min-yerra (friends, mates) of the Willilambi men, and they were very sorry to see the eaglehawk killing the boys with their shouting and branch-breaking. One day the two brothers came and sat down by Willilambi water and said to the men, “We will kill the eaglehawk who is killing and eating your boys, and when we have killed them we will give you strong, hard wood, and show you how to make good spears from it so that by-and-by you can spear all the eagle-hawks that come to your home.”

The two brothers had very strong ngal-dhara (species of hardwood spear), hard and smooth, and with very sharp points and they had wardan (spear throwers) made from the same wood, and by-and-by. they made a great wind come. While the wind was coming over the koondan (plain) they lighted a big fire and hid in the branches of the great tree that kept the earth and sky apart. Darkness came along with the magic north wind that Badhu-wudha made, and Walja and his yaggulu (woman, wife) and their two boys came to Willilambi in the big wind and sat down in a shady place under a tree. Watja said, boastingly, “This is my fire,” and he and his woman and their two boys cooked their meat and ate, having no fear of the Willilambi men; and when they had eaten they slept, hiding themselves and their boys amongst the branches of the ba-ru (sandal-wood).

Badhu-wudha and Koorulba were watching them, and presently Badhu-wudha, holding his spear and spear-thrower in readiness, crept and crept, quietly quietly, out of the tree that held the sky up, for if he had come out quickly he might have broken it. Koorulba came behind with his spear and spear-thrower, and when they were near Walja, right-handed Badhu-wudha threw his spear at m’malu (father) Walja, and left-handed Koorulba speared yaggulu (mother) Walja, and the strong and sharp-pointed spears went right through their bodies. M’malu and Mother Walja cried out and flew away with the spears sticking out on each side of them. They tried and tried to pull out the spears, but they were too strong, and by and by Walja said, “We must go back for our boys.” They went back to the ba-ru (sandalwood), but Badhu-wudha caught hold of the spear sticking out of Father Walja, and Koorulba caught the mother’s spear, and they held them and held them until the Walja were dead. The Walja boys were very frightened, and tried to hide in the thick leaves of the sandalwood, but Badhu-wudha brought them out and killed them on the plain.

Then he said to the Willilambi men, “There is your meat, cook it and eat it, for our brothers and their boys are now safe and cannot be killed any more.” The name of the place where Walja aud his woman and their two boys were killed was Gooil-gambu, and their bones are now boondong (stones) and may be seen scattered and strewn about Wonnunda (Eyre’s Sand Patch) and Kalli-ambra.

Then Badhu-wudha made a great many strong hardwood trees come up out of the ground, and he called the trees bung-gal and he took the wood from these and showed the Willilambi men how to make hardwood spears and hardwood spear-throwers, and said, “Now you win always have good hard spears and spear-throwers that won’t break or bend, and you will no more fear Wa|ja. I give the hardwood to Willilambi goon-min-yerra (friends).”

The Willilambi men were very glad, and their jiibi (old men) said, “Our wammu (fire, also ‘totem’) will be hardwood always, for we are brothers of the hard wood and all mulba (men) will carry the ngwan (shadow) of the hardwood spear-thrower inside them, so that it will tell them when the eaglehawks are coming.” Willilambi then became the hardwood i-jan-garra group, and they were able to kill and eat the eaglehawk. And the old men made yeenma (long carved boards — Spencer’s Churinga) and boorbing (bull-roarers) from the hard wood trees, and the carvings on the boards were the heart, ribs, stomach, entrails, and tail of the eaglehawk, whom they had conquered; and no eaglehawk could make spear-throwers or boards from the hard wood, for it was moodiji (forbidden) to them and belonged to the hardwood totem only.

When the brothers had made the Williambi men yaddu (glad, good, all right), Badhu-wudha and Koorulba went up, up (maadn, maada) into the sky, where they have been sitting down ever since dream times, Badhu-wudha at one side and Koorulba a little distance away; and when Willilambi bung-gal-aum died Badhu-wudha stretched out his right hand and took them up to his home; and when Willilambi women died Koorulba reached down his left hand and drew them up to his home. When a hardwood man was dying Badhu-wudha made his home clear and bright, so that the dying man should not be afraid, and all the grieving hardwood men who sat round their dying brother watched the brightness and “looked out” for the long right hand of Badhu-wudha to come and take the hand of the dying man, and when they saw the hand stretched downwards they did not grieve so much for their dead brother.

When their women and children died, Koorulba’s left hand came stretching down from the lesser brightness of his home to catch hold and bring the women to their home. White men call the brothers Magellan Clouds, but to the men of Willilambi they were always the two big brothers, right-handed Badhu-wudha and left-handed Koorulba, who saved their boys from Walja in dream times. The eaglehawks came from the north, and when they were killed by the big brothers they also went up into the sky, and the eaglehawk and his woman and their two boys are now what the white men call the Southern Cross and Pointers…