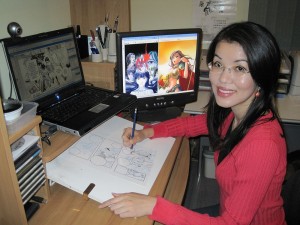 Over April we’re holding a focus on Australian women writers with ethnic heritage, and today we’re very excited to publish a guest post from graphic novelist Queenie Chan. Queenie was born in Hong Kong in 1980 and migrated to Australia when she was six years old. She has a Bachelor’s Degree in Information Systems, but didn’t follow that career path due to graduating in the middle of the dot-com bust in 2002. Two years later, she began drawing a 3-volume mystery-horror series called “The Dreaming” for LA-based manga publisher TOKYOPOP, which has been translated into multiple languages.

Queenie has also worked on Small Shen, the prequel to Kylie Chan’s “White Tiger” Chinese fantasy series, which has been reviewed a number of times by AWW participants. The first volume of her work “Fabled Kingdom”, a fairy-tale inspired fantasy story, is now in print and available for purchase, and you can read some of the pages from this below (click on the images to see them in full screen). In her post, Queenie discusses the characters she creates: ‘girls and women of various shapes, sizes, ages and ethnicities … all of them have the same agency as the male characters do.’ Read on for her refreshing and pragmatic perspectives on writing, creativity and gender.

Being a Female Comic Artist When some people find out that I draw comics, they’re often very interested. ‘What does your work look like?’ they say, as images of muscular men in colourful tights beating each other up float through their minds. ‘Actually, I draw manga, which is a style of comics from Japan,’ I would reply. ‘Oh,’ they would then say, and then picture a different set of equally misguided stereotypes, typically involving big-breasted women with huge eyes and ridiculous hair.

Neither holds much truth.

Despite comics being widely read both online and offline in our society, there still seems to be a disconnect between people’s perception of the medium and what it’s really like to use it as a tool for self-expression. It’s often seen as a fantasy medium for men and men only, and for the uninitiated, many people’s mental imagebanks are often tainted by other visual mediums (like advertising, film and video gaming) that are still heavily tilted towards male fantasy.

Let’s face it. When I ask the average person about depictions of women in media, the first thing they mention is female body image, and the sexualisation of women. They then go on to talk about how the depiction of women affects the self-esteem of young girls, because they look into the mirror and find their physique wanting when compared to catwalk models.

My answer to that is usually not the ‘you should love yourself the way you are’ sort of stock reply, which has been bandied around for years, to little effect. Instead, I bounce another question back at the person asking it:

Why the focus on what women look like and what they’re wearing?

Why is the debate about teenage self-image always about appearances, and not about the stories of women as people who have lives, hopes and values?

Comics are about Stories and Characters, not Images Comics have always been about stories and characters. Unfortunately, those who don’t read comics tend to look at the art, and forget that the art is merely representative of various characters and roles. It is these characters and their lives that make a comic – and indeed, any story in any medium – come to life in the mind of the reader.

This aspect of comics is what made me want to draw comics, especially when I was starting out as an 18 year-old artist. It offered springboard reality at the cost of a pen and a piece of paper, and infinite ways to depict the world around us as well as worlds beyond. Nowadays, we live in an extremely visual world, one that is getting more visual by the year. Comics, with their mix of pictures and words, allow a flexible yet complex way of depicting the stories that I want to tell. In other words, I’m no different to a prose writer – except that I’m a writer who draws. And that is what I’ve been doing for the past 10 years. Using just a fine liner and a sheet of paper, I’ve created girls and women of various shapes, sizes, ages and ethnicities. Sometimes these women are interested in romance, sometimes not, but all of them have the same agency as the male characters do. Which I feel is the important thing. Not so much talking endlessly about a woman’s appearance, but showing that every single character, male or female, can be a well-rounded person with goals and values.

I’ve done work that I’ve been proud of during that time, such as my first published story ‘The Dreaming,’ and the ‘Odd Thomas’ series that I worked on with Dean Koontz. I’ve since learned to incorporate prose into my comic work, which I call ‘comics-prose.’ I’ve produced stories such as ‘Small Shen’ with author Kylie Chan as well as my own current work, ‘Fabled Kingdom,’ which push comics in a new direction. If anything can be said, it’s that better stories can be told by mixing prose and comics together, by combining the best aspects of both mediums. More so than even that, being able to produce visual stories in our super-visual age is a powerful and influential skill that I don’t take lightly.

Swamped by Media Imagery of Perfect Women, and Pushing Back I have no idea whether my characters or stories have much of an effect compared to the avalanche of advertising images we see daily. Advertising has given us the physically perfect woman, with photo-shopping so rampant that the images might as well be cartoons. My work is my way of pushing back against the tide. I’m grateful I’m able to create my own space, where I can express my feelings and ideas about people. By drawing my characters and my stories, I have a way of competing with these advertising images by showing people how things can be different.

At the end of the day, we’re all suckers for pretty pictures, much like we’re suckers for a pretty face. As individuals we know that pretty faces don’t last and it’s what’s inside that count, but as a culture, we tend to forget that. I hope for the day when we can, as a collective culture, move past the fixation on what a woman (sexy or not) looks like, and ask ourselves whether there’s a meaningful narrative behind her. This is because ultimately, range and diversity in female roles is what will help us move past this point. Only then, can we show images of women whose personalities and not their looks are the most important thing about them.