Next Thursday is International Women’s day and author Kirsten Tranter, a supporter of The Stella Prize, will be speaking at numerous venues around Sydney, including on a panel at Katoomba with authors Tara Moss and Claire Corbett. The topic for the day, inspired by VS Naipaul’s famous dismissal of women’s writing as instantly recognisable and inferior to his own, is: “Do women write differently from men?” Details of the various Stella events scheduled around the country can be found on the Stella events webpage; details for the Katoomba event here.

Tranter’s second novel, A Common Loss, has been received to wide acclaim. Two guest authors have chosen to review Tranter’s book for the AWW challenge, poet Phillip A Ellis and novelist Lisa Walker.  Lisa today posted the full review on her website and provided AWW with the following extract. Lisa writes:

A Common Loss is Australian author Kirsten Tranter’s second novel. Her first, The Legacy, was an assured, fresh retelling of Henry James’s Portrait of a Lady. A Common Loss tells the story of five friends who meet at university and keep in touch over the next ten years. Following the death of one of their number, Dylan, the friends re-group for their annual visit to Las Vegas.The story starts with the narrator, Elliot, remembering a car accident the five had together. The driver, Cameron, swerves to avoid a deer and they crash. Cameron has been drinking, so Dylan claims to be the driver. As the years go by, whenever Elliot remembers the crash, it is Dylan who he sees at the wheel. This trick of the memory becomes a motif for the story.Elliot, a professor of literature, sees himself as a bit of an outsider in the group. With Dylan, who Elliot idealised, removed, tensions rise and relationships buckle under strain. Elliot discovers that not all of his friends viewed Dylan the same way he did. Dylan’s death sets events in train where each friend is forced to reveal long-hidden secrets… The full review appears on Lisa’s blog here.

The second review is by poet Phillip A Ellis. Phillip writes:

It is true that I do not read as much women’s writing as I should, with a tiny amount of that being by Australians. Hence my involvement in the Australian Women Writers Reading and Reviewing Challenge of2012. Because I want to remedy that lack, and because I want to demonstrate my support for my  fellow writers, and because I especially want to support writers whose work I appreciate and love, it is with delight that I have been given the chance to review A Common Loss by Kirsten  Tranter; her two novels have become favourites of mine for a number of reasons that I will be discussing in this review. This chance, the chance to support a writer whose work I admire, fits  in with the challenge, and it fits in with my love of good writing.

Five friends–Elliott, Brian, Tallis, Cameron and Dylan–have been friends since college, and since college have held annual vacations in Las Vegas. This year, things are different: Dylan the peacemaker, the glue that keeps the friends together, has died in an accident, and the remaining four are left facing the secrets that bound them to him. Secrets which threaten them in turn,  seeming to promise the dissolution, not only of the friendships, but of their careers and reputations. A Common Loss deals with these, being set in Las Vegas, a place where artifice and  reality intermingle, and where moral certainties can be set adrift, and it deals with the relationships between friendship and secrets, grief and betrayal, all while the spectre of Tennyson’s In  Memoriam weaves through the narrative as a form of parallel text.

There are a number of ways that two texts may parallel each other. For example, two narratives may directly parallel each other, incident for incident, or they may counterpoint each other.  There may be a shared language, a shared worldview or shared mood or voice. And there may also be a shared setting or set of characters. While it may be common to expect the texts to be narratives, such as two novels or other forms of fiction, it is rarer for the texts to differ in the way that they do here. In Memoriam is a lyric elegy, whereas A Common Loss is less of an elegy and more a narrative whose inciting act is the death of Dylan, and the losses that arise out of his death.

There are, however, many ways in which the two texts parallel each other.

Given that In Memoriam encodes the obsessive nature of grief and mourning, so that the text itself returns repeatedly to the image of the dead man mourned, so too is A Common Loss haunted by Dylan. As a way of understanding this, if we consider that Julius Caesar In Memoriam also serves as a thematic thread in the narrative. I won’t say exactly how, save that it has relevance for the narrator, Elliott, and his relationship with Dylan.

And it is the relationships that define the narrative and the ethos of the book. As a result, while A Common Loss is literary, it does not smell of lamp oil, precisely as a result of its narrative emphasis on the shifting relationships. There is the relationship between Brian and Cynthia, and between Cynthia and Elliott, as well as Elliott and Natasha; while each does not dominate the narrative, they form part of the shifting play of attraction and allegiances, the attraction between the men and women, and the allegiances between the friends, so that the novel is dominated by their fluid interweavings and interactions. There is a skill to this writing, and this skill is evident in the way the characters shift and react towards and against each other.

This skill also extends to the writing. It is literate, eschewing the easy attraction of generic simplicity for ambiguous complexity, and the characters details are deftly handled in such a manner as to sustain narrative tension and believability. It is also, as a result, compassionate. The onstensible antagonist is revealed as equally believable as the others, all of whom are united by an emphasis on their relationships with each other and the absent Dylan.

Furthermore, the characters are believable: there is a sense that these are people who could exist, who could live and breathe, and meet our understanding of what a real person is.

And the compassion of the writing extends to the characters themselves. There are, that is, no black-and-white characters, no heroes or villains, only the protagonists, their primary antagonist, and the more shadowy, elusive figures that mainly appear for a moment then fade. By concentrating so centrally on the friends and Cynthia,
A Common Loss reinforces its focus on their relationships with Dylan. So that, while there is scope for a much wider cast of characters, the focus on the central group is integral to the novel and its concerns. This focus works with the characters’ believability, so that their roundedness works with us to create a sense of engagement. We believe in them, that is, and we are concerned with the outcome of their shared dilemma.

A Common Loss is only Kirsten Tranter’s second published novel. Yet it is a skilled novel, one that uses In Memoriam both as a parallel text and thematic concern. It is also literate; and it does not smell of lamp oil. Its writing is compassionate, its characters also believable and treated in a compassionate manner, and, as a result of these, I can only admit that A Common Loss is a major contribution to contemporary Australian literary fiction. While it is a quibble to consider the use of the American characters and setting as somehow unAustralian, it is a false quibble. A Common Loss is Australian precisely because it is develops an Australian sensibility, an Australian worldview, even as it deals with the wider world. And it is these two that really make Australian writing, and Australian women’s writing, as distinctive and worthy of serious consideration as it is, despite our cultures’ wider neglect. 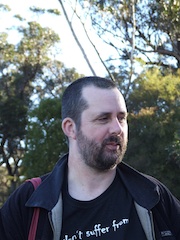 Phillip A. Ellis is a freelance critic, poet and scholar, and his poetry collection, The Flayed Man, has been published by Gothic Press; Gothic Press will also edit a collection of essays on Ramsey Campbell, that he is editing with Gary William Crawford. He is working on another collection, to appear through Diminuendo Press. Another collection has been accepted by Hippocampus Press, which has also published his concordance to the poetry of  Donald Wandrei. He is the editor of Melaleuca. He has recently had Symptoms Positive and Negative, a chapbook of poetry about his experiences with schizophrenia, published by Picaro Press.

Have you read or reviewed either of Kirsten Tranter’s books? What did you think? Feel free to add your link.