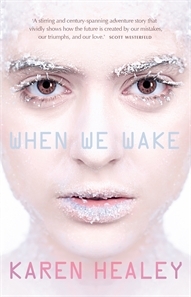 Hi guys! Welcome to the second of twelve YA Speculative Fiction round-ups for 2013. Throughout February, there have been 21 new reviews (I’m including a few that were posted in the last days of January as well). Here are some highlights:

The last thing Tegan remembers is the crack as the gun went off, intense pain, and everything fading to black. One hundred years later, she wakes up. Tegan is the first person to be cryonically frozen and successfully revived, which makes her an instant celebrity – though all she wants is to rebuild some semblance of a normal life. Set in a dystopian Melbourne of the near future, When We Wake by Karen Healey is a powerful novel that examines humanity at its core, and asks readers what kind of future they envision for our wonderful country. I really enjoyed it (read my review here), and I also had the opportunity to interview Karen (read it here). Amanda @ veganYAnerds remarks that Tegan adjusted surprisingly well to her situation: “Tegan makes a good go of her second chance at life, despite having to mourn the loss of her mother, brother, Alex and Dalmar who all went on to live their lives and pass away years before she was awakened”. In her 5-star review lauredhel tells us “[the] pacing is terrific, with the plots and secrets revealed in a way that is alllmost horrifying enough. The world-building is believable and palpable and the characters are varied and immediately engaging.”

Another science fiction novel reviewed by participants is And All The Stars by Andrea K. Höst, which is also set in Australia, this time in Sydney. I love this book, it’s one of the best self published books I have ever had the pleasure of reading. Madeline Cost wants to win the Archibald Prize for portraiture. But the Spires – featureless monstrosities that spring up in the hearts of cities across the world and spray clouds of sparkling dust into the wind – trap her underground. At Ground Zero of the Sydney spire, covered in the mysterious dust, Madeline hopes she can make it above ground and find out if the world is ending. Stephanie Gunn also recommends it, saying “There is a lot to praise about this book” and “Definitely worth a read, especially if you’re interested in what’s happening in self publishing”. Erin Golding compares it to John Marsden’s Tomorrow series: “Höst did very well to capture in her own unique way what Marsden had successfully achieved before her – a serious war mixed with typical teenage issues, such as raging hormones and the need for maturity and skill beyond their years.”

A book that adds a speculative twist to a classic is Black Spring by Alisson Croggon. The story is a modern take on the classic, Wuthering Heights, with the addition of magical abilities. In this version the main character is Anna, and it is she who has magical talent, while also being self-destructive. The focus of the story is her dramatic relationship with Damek. Emma from My Book Corner says “Croggon’s Black Spring has harnessed the gothic mood of its original, before taking it to a wonderful new level. An engaging and gripping read.”

The Laedwin by Leah Giarratano is the sequel in the Disharmony series. The series involves a prophecy and three people who need to come together and Bree says “The Laeduin is a bit of an up and down ride – at times it’s quite slow and gets a bit bogged down in conversations and events that seem mundane and unimportant and merely filler. And then there’ll be a reveal that accelerates the plot forward greatly and I can’t wait to find out what is going to happen next.”

And lastly we have The Interrogation of Ashala Wolf by Ambelin Kwaymullina – a dystopian novel set in the future, after the world as we know it has been destroyed and reformed as one large continent. In this new world, some people are born with special abilities and others are convinced they pose a threat to the Balance. Mark writes “I enjoyed the references to Australian Aboriginal culture. Because of the near civilisation-ending nature of the cataclysm, there aren’t the same kind of racial divides as there are in contemporary society. However, Kwaymullina makes it clear that Ashala is one of the last descendants of Aboriginal Australia and weaves in Aboriginal mythology into this far future tale. While I can’t comment on the authenticity of the representation, I found it interesting to consider the perspectives on connection to land and people that the book explores.”

The other books that were reviewed in January are:

Hi! I’m Shaheen from Speculating on SpecFic, a book blog dedicated to works of speculative fiction – fantasy, science fiction, magic realism, paranormal romance and much more. I can’t remember a time when I didn’t love reading and use my blog to peddle my love to others. When not reading (rare times indeed), I can be found planning my upcoming wedding and completing my PhD in Astronomy and Astrophysics.