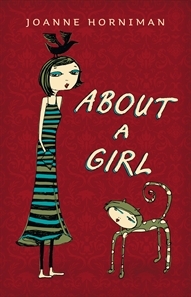 Over August there were a number of thoughtful of reviews of books that represented issues of diversity.  Dinner at Caphs reviewed Joanne Horniman’s About a Girl, a novel about Anna, who likes girls.  Anna falls ‘truly, desperately and all-pervasively in love, as only young, first love can be’ with Flynn, and learns how to accept her difference, not only in terms of her sexuality, but also her cleverness.  The reviewer found the work ‘a lovely book to read, its language is full of the intensity of Anna’s attraction to Flynn, and beautifully reveals the hurts and confusions that each young woman slowly exposes to the other, and to us’. Nalini of Dark Matter Fanzine penned a considered review of Jamie Reign: The Last Spirit Warrior, whose protagonist is a 12 year old Chinese-European boy.  Nalini applauds the author, PJ Tierney, for ‘writing a not-pure-white lead character with most but not all of the other characters being Chinese’, and for the detail of Tierney’s experience working on the boats and barges in Hong Kong, which ‘definitely shines through in this novel’.  Nalini also notes that ‘Many readers will identify with Jamie: readers of bi-racial heritage, readers who are disabled, readers who have varied sexual orientations or fail to conform in other ways.’ She also, admirably, applies the ‘Bechel test’, (two named females talking about something other than the males without the males present) and finds the novel ‘redeems itself with Lucy and Jade, kick-ass girls, thinking and acting independently as well as helping the boys.’  However, Nalini notes that there are also some flaws in the work, including failing to put family names before Individual names, as per Eastern tradition, and that it was a little clichéd. Hazel Edwards, author of that childhood staple There’s a Hippopotamus on My Roof Eating Cake, has co-authored, with Ryan Kennedy, a young adult book titled F2M: The Boy Within, about the transitioning of a female high school leaver, Skye, to a male, Finn.  This was reviewed for the AWW Challenge by Stevie of Visibility Fiction (and is also mentioned in the July/August YA roundup).  Stevie wrote very positively of the work, not least because ‘Skye/Finn is a member of a feminist punk band and we get a glimpse into a peer group that is anti-establishment, radical, feminist, punk, and even somewhat anti-capitalist, which is totally awesome.’ Janine of Resident Judge reviewed a fascinating work, Transnational Lives: Biographies of Global Modernity 1700-Present, edited by Desley Deacon, Penny Russell and Angela Woollacott.  This scholarly work consists of 21 essays on lives that cross national, racial and cartographic boundaries.  Janine found it tightly edited, with the three female editors having a strong presence through cross-referencing each others chapters.  To Janine ‘it was like being in an interesting conversation over an extended period of time, with people talking to each other, rather than at one another.’  The book’s subjects include Aboriginal man Manyat, who guided explorers in Western Australia in the 1830s; 19th Century woman Lady Jayne Franklin and her attempt to garner support for her missing husband in the Arctic; Lowe Kong Meng, a Chinese businessman living in Melbourne as the racial barrier came down increasingly on Chinese Australians at the end of the nineteenth century; and Donald Friend, the artist who travelled widely but seemed compelled to keep returning home.  This sounds like a wide-ranging book which I’ll definitely pick up. Marilyn Brady of Me, You and Books reviewed Wiradjuri woman Jeanine Leane’s novel Purple Threads.  This is the story of Sunny, whose ‘account could be that of any children anywhere, but in fact, their experiences are shaped by the fact that her family are Indigenous people, living in an area of white farmers in Australia.  They are “different” as Sunny discovers and laments, but the aunts point out that difference is a good thing like purple, or black, threads in white cloth.’  Marilyn noted that ‘whatever stereotypes exist about Indigenous people caught in an endless circle of poverty and inadequate parenting are challenged in this book’, for Sunny and her family are self-sufficient, well-read, and tightly-knit.  Marilyn enjoyed this accessible novel and recommends it to all readers.

Marilyn also enthusiastically reviewed Merlinda Bobis’ Fish Hair Woman, which she described as ‘one of the best books I have read all year’ (this post is also mentioned in our Contemporary Fiction roundup for August).  The fish hair woman is Estrella, who uses her 12 metre-long hair to trawl the river for dead bodies in the Philippines in the late 1980s, during a period of civil unrest.  Marilyn also refers the reader to a review of this work by Sue of Whispering Gums, who describes it as ‘part war story, murder mystery, political thriller, romance, and historical epic. It draws on the magical realist tradition of writers like Isabel Allende, but overarching all this, it is a book about stories – about the stories we cleave to ourselves and the stories we tell others, the stories that convey the truth and the ones that hide it, the stories that change with time and those that never change.’  It is, Sue continues, a book set during a war but it isn’t really about war.  Instead, it’s about people, and ‘collective grieving, collective responsibility’.

Merlinda will be doing a guest post for the Australian Women Writers Challenge on her book next month, as we’ll be holding a focus on Australian women writers of diverse heritage.  Another two excellent authors will be writing guest posts – Tseen Khoo, a researcher and writer on (among many other topics) Asian Australian issues, and Alice Pung, author of Her Father’s Daughter and Unpolished Gem.  We also have a book giveaway for those who pen reviews of books by women of diverse heritage (names will be drawn from a hat!).   I’ll post more information about this in a few days, and we really look forward to receiving your reviews!